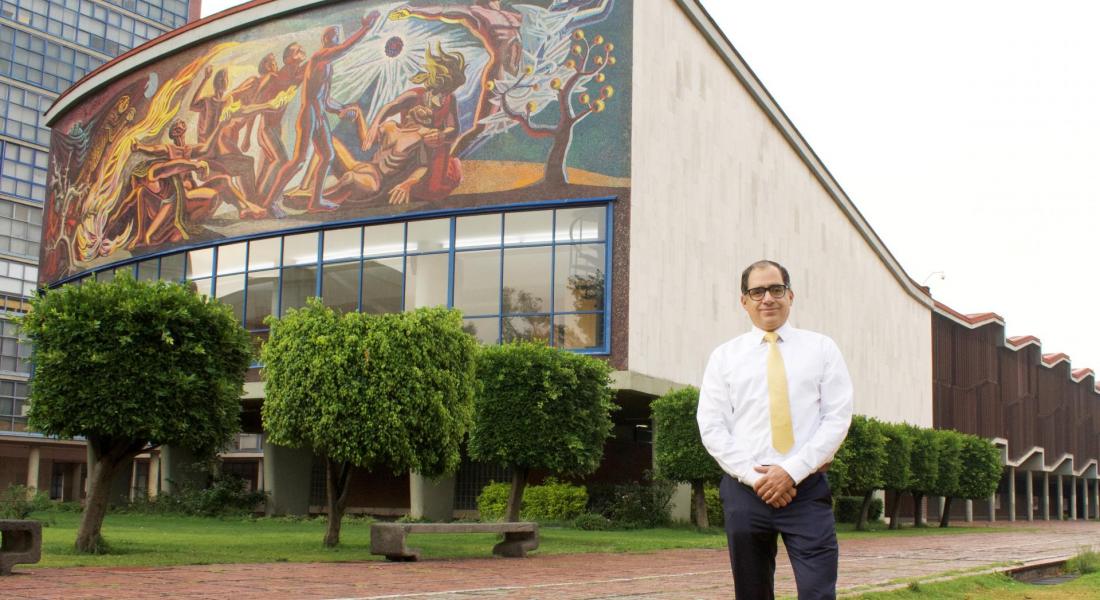 An expert in political psychology and strategic communication will be the first scholar in residence at the Kellogg Institute for International Studies through a new partnership with Notre Dame International (NDI) and COMEXUS, the Mexican Fulbright Commission.

Julio Juárez Gámiz, the University of Notre Dame’s inaugural Fulbright-Garcia Robles COMEXUS Mexico Studies Chair and an associate professor at the Universidad Nacional Autónoma de México (UNAM), will begin his semester-long fellowship this fall. While at Kellogg, he will work on a project that analyzes Mexico’s diverse political environment and the forces challenging Mexican democracy, including civic distrust in government and increased polarization in political discourse.

“This is a unique opportunity to share my work with a very active and vibrant academic community,” said Juárez Gámiz, who studies political advertising, mass media coverage of elections, electoral debates, and political communication at UNAM’s Centre for Interdisciplinary Research in Sciences and Humanities. “It is my goal to bring to the fore topics of great relevance and impact on both sides of the border and thus contribute to rethinking our shared democratic challenges."

The Mexico Fulbright Chair will bring a senior Mexican scholar to Kellogg as a visiting fellow to teach about Mexico and study issues related to the Institute’s research themes of democracy and human development. The scholar will also take part in the Institute’s Mexico Working Group.

The position will deepen Kellogg’s expertise in Mexico, one of the largest nations in Latin America, as Notre Dame enhances its international presence and reputation as a global university.

“We knew we wanted a strong intellectual community on campus for this scholar, so we reached out to Kellogg with the idea."

“The Mexico Fulbright Chair builds on Kellogg’s historic strength in Latin America at a time when the region is facing a growing number of threats to its democracy,” said Kellogg Director Paolo Carozza. “This is a unique opportunity for us as scholars to learn more about Mexico at this critical time in its history. It is also an opportunity for both Kellogg and Notre Dame to broaden our ties within Latin America and plant the seeds for future collaboration.”

“The fact that this is our third Fulbright collaboration with three different Latin American countries is a significant testament to the prestige and reach of Kellogg's presence and reputation throughout the region, and it serves to extend our already-wide network of Kellogg affiliated scholars in the Americas,” Carozza added.

Michael Talbot, director for Notre Dame’s initiatives in Mexico at the Mexico City Global Center, said NDI initiated the idea of hosting a Mexico Fulbright Chair on campus as an extension of its partnership with COMEXUS, which has established similar positions at five other American universities.

“We knew we wanted a strong intellectual community on campus for this scholar, so we reached out to Kellogg with the idea,” he said. NDI and Kellogg together negotiated a five-year agreement for the position with COMEXUS and jointly selected the 2021-2022 finalist; NDI will cover half the cost of the Fulbright position and host a public lecture by Juárez Gámiz.

“This Fulbright is unique in so far as it represents a true 50-50 partnership between Kellogg and NDI ­– one which we hope will serve as a foundation for continued collaboration throughout Latin America,” Talbot said. “We also plan to use our physical footprint in Mexico to follow up with each Fulbright scholar and his or her host institution to nurture those relationships after they return home.”

Talbot described Juárez Gámiz as “an accomplished and well-respected scholar whose areas of interest fit well with the Kellogg Institute’s focus on democracy and human development. His work in political communication is particularly relevant, given the polarized politics and extreme discourse we see in the US, Mexico, and elsewhere around the globe.”

Juárez Gámiz, meanwhile, said he is “delighted” about the position and the opportunities it offers for academic collaboration and reflective thinking, adding: “I cannot think of a better place and time to embark on this professional endeavor.”