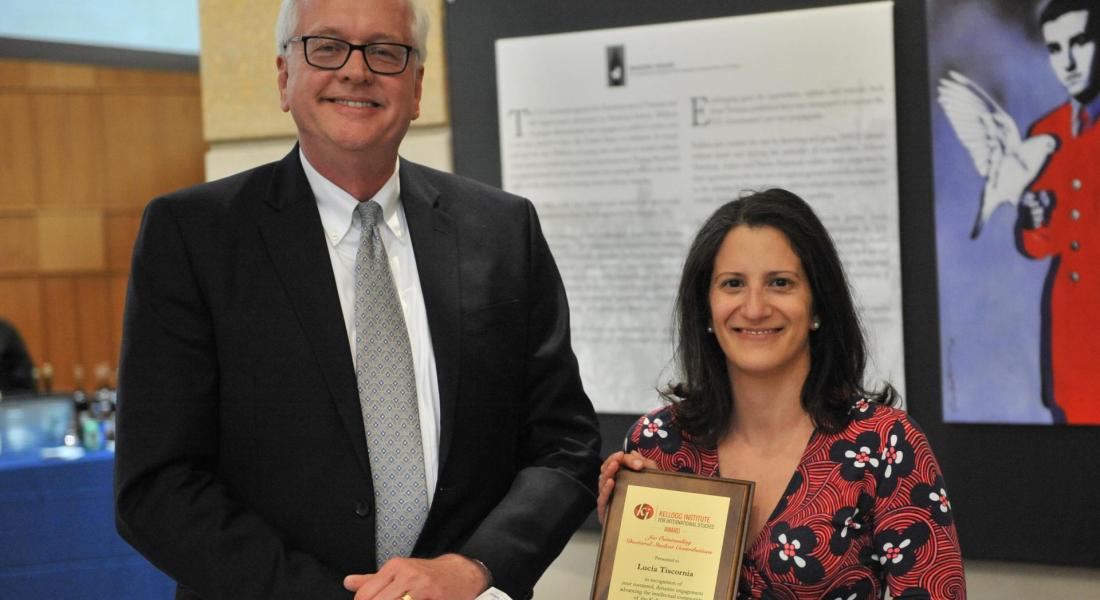 The award, now in its second year, recognizes a doctoral student affiliate for outstanding contributions to the intellectual life of the Kellogg Institute. It carries a monetary prize of $500.

Recognized as a top scholar by faculty and her peers, Tiscornia’s participation at the Kellogg Institute goes far beyond the classroom. She organized a groundbreaking workshop this spring on the challenges that face female researchers who study violence and has helped extend the reach of the Varieties of Democracy project to South Africa and Central America.

"I wouldn't be getting this award if it wasn't for the Kellogg staff. They've really supported me in everything I've wanted to do," Tiscornia said. "Research is important and communicating it with others is fundamental, and thanks to their work, I'm able to do that."

She has been widely involved organizing lectures and workshops and in what Faculty Fellow Catherine Bolten (anthropology and peace studies) called the “much harder to measure, and easily overlooked, day to day of immersion in Kellogg themes.”

“She speaks frequently with faculty and other graduate students about her research and their own research, drawing links and connecting different kinds of work, and I think this is a fundamentally important aspect of life at the institute,” she said.

Tiscornia, who is studying how post-conflict societies deal with criminal violence, was nominated by several graduate students and faculty fellows for the award. They cited her multidisciplinary collaboration, mentorship of other graduate students, intellectual leadership, and initiative in organizing key Kellogg events.

Those events include bringing former PhD Fellow Javier Osorio (political science) of the University of Arizona back to the University of Notre Dame last year to conduct training on the Eventus ID software for use in research. She also helped coordinate this year’s Perspectives on World Politics lecture series at Kellogg.

Meanwhile, she has worked extensively with Faculty Fellow Michael Coppedge (political science) on the V-Dem project, giving talks, co-authoring working papers, and extending networks of the project to South Africa and Central America. Last year, as part of a project led by the Global Development Initiative, they organized training for NGOs in El Salvador, and Tiscornia continues to mentor two NGOs in Honduras and Guatemala in their work on corruption and human rights.

She organized a Kellogg-sponsored workshop, the first of its kind, in April for more than a dozen female scholars on the forefront of violence research in political science. The event, which included an open panel discussion on the challenges of conducting fieldwork as a woman, was aimed at increasing gender equality in academia and targeted early- to mid-career scholars.

Faculty Fellow Guillermo Trejo (political science) called her a “rising star in political science” and predicted her dissertation will be competitive for national awards in conflict studies. In it, she argues that when post-conflict societies fail to demilitarize their police forces and hold them internally and externally accountable, policing practices increase rather than deter criminal violence.

She’s also coauthoring a paper with Trejo and PhD fellow Juan Albarracín (political science) on the impact of transitional justice processes on criminal violence in new democracies, which is under review.

“I expect Lucía to become one of our best Kellogg ambassadors in the professional world – someone who will devote her life as a scholar to improve the quality of democracy for citizens around the world,” Trejo said.

Tiscornia has a bachelor’s degree in political science and a diploma in international studies from Universidad de la República in her native Uruguay, and an MA in peace studies from the Kroc Institute for International Peace Studies. She worked for the United Nations in Uruguay before coming to Notre Dame.

Faculty Fellow Joshua Eisenman was interviewed by The Washington Post about Biden’s and Xi’s recent meeting. Before the meeting Xi stated that he wanted to stabilize U.S.-China relations.