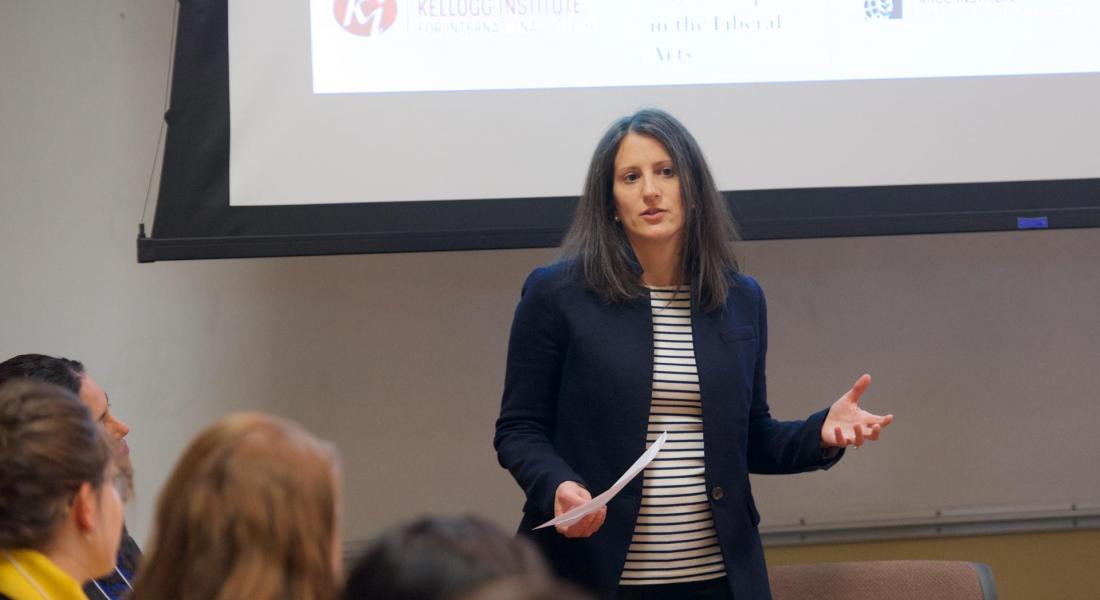 Research can and should solve real-world problems.

That’s according to Lucía Tiscornia, a dissertation year fellow at the Kellogg Institute for International Studies who studies conflict and recently earned her PhD in political science.

Tiscornia’s work focuses on criminal violence, conflict termination, and security sector reform – interests that grew following a stint working with the United Nations in her native Uruguay, and later through her studies and on-the-ground research with the Kroc Institute for International Peace Studies, where she earned her master’s degree.

It was there that she was introduced to the field of conflict studies, which, she said, piqued her interest “between the state and this dark side – the criminal element – and how these two seem to dance together.”

She came to Kellogg as a PhD candidate because of the Institute’s interdisciplinary approach to research and its focus on democracy.

Her commitment to bridging academia and policymaking started during her three years with the UN’s Office of the Resident Coordinator in Uruguay – the equivalent of the Secretary General, but at the country level – where she helped implement administrative reforms and monitor projects on the ground.

The job gave her an up-close look at how polices are crafted, and prompted her to go back to school to improve her research skills so she could play a more active role in turning ideas into reality.

While at Kroc, she worked as a research fellow with the Institute for Justice and Reconciliation, studying police violence in post-apartheid Cape Town, South Africa.

Tiscornia was drawn to Kellogg because a number of its faculty share her research interests. Close collaboration with those faculty fellows and the Institute’s visiting scholars, along with organizational and financial support for research and workshops, have pushed her work to the next level.

She has worked closely with Faculty Fellow Guillermo Trejo, an associate professor of political science, in his work on transitional justice and criminal violence. Along with former Kellogg doctoral student Juan Albaraccín, the three co-authored a September 2018 article in the Journal of Peace Research that describes how strong truth commissions in new democracies are linked to less violent societies.

Tiscornia said Trejo has heavily influenced her development as a scholar.

“His approach to research, the way he thinks through problems, really stuck with me from the beginning,” she said. “It helped that he actively involved me in his own research. Those things tremendously shaped the way that I think through problems and my academic path, and the choice of my research.”

Trejo, meanwhile, has called her “a rising star in political science.”

“I expect Lucía to become one of our best Kellogg ambassadors in the professional world – someone who will devote her life as a scholar to improving the quality of democracy for citizens around the world,” he said.

Tiscornia’s dissertation addresses the tensions between police and citizens in post-conflict societies, focusing on how police reforms can reduce human rights abuses and violence stemming from police behavior towards criminal groups.

In 2018, she received the Kellogg Institute Award for Outstanding Doctoral Student Contributions, given to a doctoral student affiliate for outstanding contributions to the intellectual life of the Institute. The award recognized participation beyond the classroom, including her organization of a workshop on the challenges facing female researchers who study violence.

The event was aimed at increasing gender equality in academia and targeted early- to mid-career scholars.

Kellogg’s support was key to organizing the event and influencing other groups to provide funding, she said: “I brought the idea, and there were people at Kellogg who were willing to listen to it and get on board with it.”

Tiscornia, who has worked on the Varieties of Democracy project, is now working on a new research project on public perceptions of police interventions in high-crime neighborhoods in Uruguay.

The project is funded by the country’s Ministry of Interior and could help shape ongoing policy debates about security.

“I’m hoping we can have an impact because we can give specific recommendations to the government, and talk to the broader public about the very real implications of enabling police to use violence in situations where they probably shouldn’t use it,” she said. 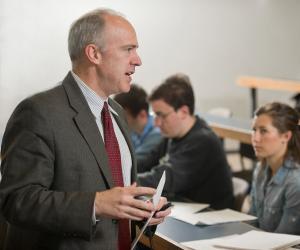