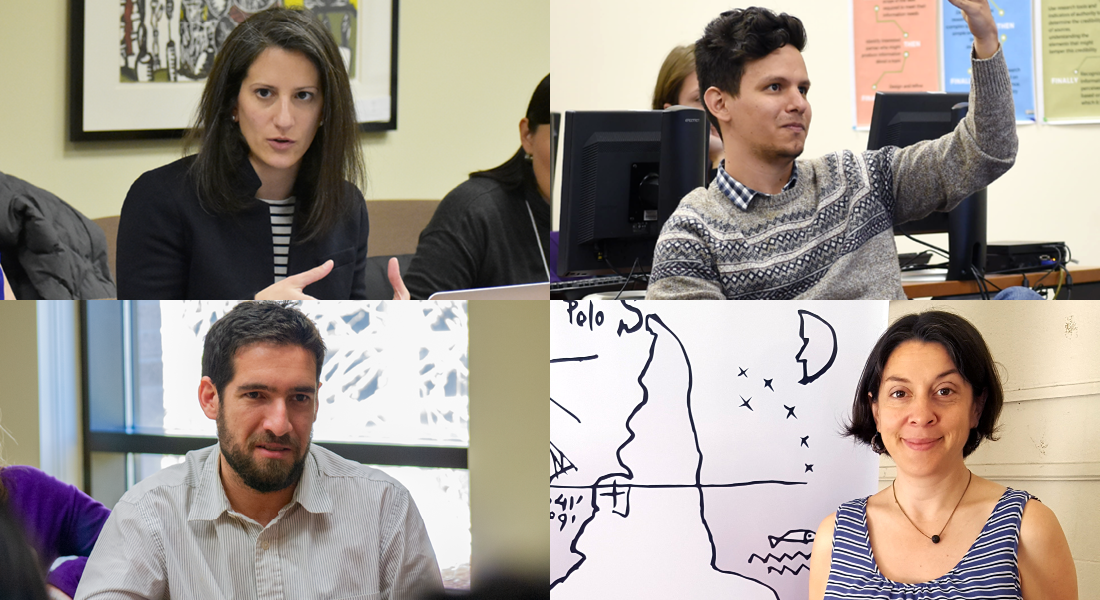 A new research project on policing in Uruguay indirectly got its start at the Kellogg Institute for International Studies.

“Police Capacity, Practices, and Citizens’ Perceptions: An Analysis of the PADO in Montevideo” examines citizen responses to PADO, or the Programa de Alta Dedicación Operativa. The initiative uses heavily-armed police, often dressed in riot gear, to intervene in Montevideo neighborhoods where crime has increased in recent years.

Four of the five scholars involved in the project, all of whom study policing, violence, or organized crime in Latin America, met at Kellogg.

“We came together here and now we’re scattered, but we’re still connected,” said Lucía Tiscornia (pictured above), a dissertation year fellow in political science and the project’s co-principal investigator.

Three of the researchers – Juan Albarracín (pictured above, political science), Leslie MacColman (sociology & peace studies), and Tiscornia – are current or former doctoral students. Another, Hernán Flom, was a visiting fellow in the 2016-2017 academic year.

The other PI, Verónica Pérez, is an assistant professor at the Universidad de la República in Uruguay, which is administering the grant funding the project.

The grant was awarded by the Uruguayan National Agency for Research and Innovation, a government agency that promotes research and knowledge application in areas relevant to the country.

Tiscornia said the project, which will be implemented over 10 months beginning in March, will look at the experiences and attitudes of residents in the affected Montevideo neighborhoods: Do they support the police interventions? Have their levels of support increased or decreased, and why?

She noted that similar intervention policing efforts have become popular in Latin America in recent years, though levels of violence in Uruguay are comparatively low for the region.

Several of those involved in the interdisciplinary project credited Kellogg with bringing them together. Tiscornia said Faculty Fellow Guillermo Trejo, an associate professor of political science who coauthored a September 2018 article on transitional justice and criminal violence with Tiscornia and Albarracín, was particularly instrumental in doing so.

Albarracín, who earned a PhD in political science and is now an assistant professor and director of undergraduate studies in the Department of Political Studies at Universidad Icesi in Colombia,said Kellogg fostered a uniquely cooperative research environment through informal events such as weekly academic discussions and monthly luncheons.

“This was conducive to building long-lasting relationships and friendships with other members of the Kellogg community,” he said.

Those relationships made working together on the Uruguay project an easy fit. Albarracín noted that several Kellogg-sponsored activities, including a May 2017 conference on criminal governance, allowed them to share ideas about the general topic before the project was a possibility.

“Once the opportunity came up to apply for these funds, it seemed natural to work together,” he said.

MacColman, a PhD candidate in peace studies and sociology, described Kellogg as an “intellectual home” that fostered interdisciplinary dialogue and debate, allowing her to develop relationships with faculty members, visiting fellows, and graduate students she otherwise might not have met.

“In many cases, what began as ‘purely academic’ conversations about topics of mutual interest evolved into lasting friendships, which I continue to value on both the professional level and the personal level.

“This project involves collaboration across multiple countries, languages, institutions, and disciplines,” she added. “Despite these challenges, our team has been able to work together successfully thanks to our shared knowledge base and relationships of trust.”