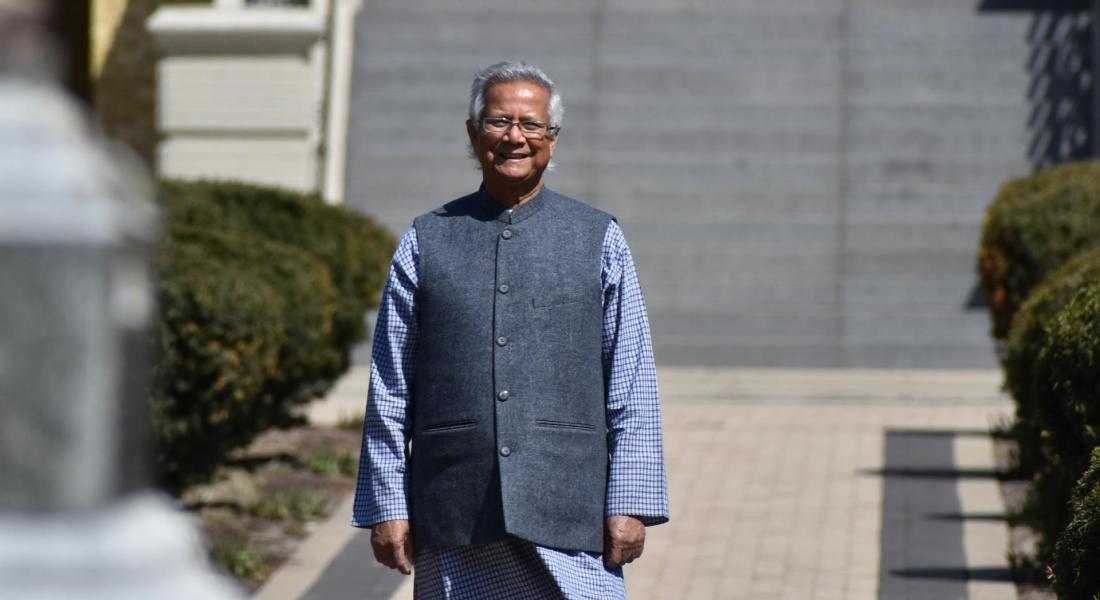 Prompted by anger at loan sharks taking advantage of poor families in his Bangladeshi town, Muhammad Yunus began making tiny loans out of his own pocket to impoverished women seeking to start their own businesses.

That was more than four decades ago, but Yunus’ pioneering work in microfinance – for which he would earn the Nobel Peace Prize in 2006 – is still being used as a model for extending credit to some of the world’s poorest people and helping them lift themselves out of poverty.

His underlying belief in the dignity and creative capacity of everyone, regardless of their wealth or status, aligns with the focus of the Kellogg Institute’s Ford Program, which honored Yunus during his recent visit to the University of Notre Dame with its top award for promoting international human development.

“Much in his approach to his work and his philosophy resonates very strongly with our mission,” Ford Program Director Rev. Robert Dowd, CSC, said. “He demonstrated a certain belief in vulnerable and marginalized people by loaning them money. When someone believes in you, then you can begin to believe in yourself.”

Yunus, whose visit to campus included meetings with Kellogg Institute students, has in recent years expanded his focus to promote social businesses as sustainable alternatives to long-term aid.

He received the Ford Family Notre Dame Award for International Development and Solidarity from the Kellogg Institute on April 12. The award ceremony was followed by a Notre Dame Forum discussion with Kellogg Faculty Fellow Ray Offenheiser, director of the Notre Dame initiative for Global Development.

Yunus said that poverty isn’t created by the poor, but by a system of economics that siphons money to a tiny number of wealthy elites.

“Fix the system,” he told the audience of several hundred, noting that he had created social businesses to address problems he saw in Bangladesh.

Kellogg International Scholar Victoria Erdel García was one of four students, all winners in a campus-wide essay contest on global citizenship, who took part in a discussion panel; she asked about measuring the impact of one’s work.

Yunus met with other Kellogg Institute students at a lunch for International Development Studies undergraduates and participants in the International Scholars Program.

Several dozen students also took part in an afternoon “high chai” Bangladeshi-style tea, which included a discussion of his 2017 book, A World of Three Zeros: The New Economics of Zero Poverty, Zero Unemployment, and Zero Net Carbon Emissions, with a book signing and a chance for students to pose questions to him afterward.

All were part of reading groups that met in the weeks before Yunus’ visit to discuss his book. The 80 or so participants included undergraduate and graduate students from a range of disciplines, including economics, peace studies, civil engineering, political science, and business.

Dowd said that in a personal conversation with Yunus, he was struck by his recommendation that, at a young age, people ask themselves: Who am I, and what kind of world do I want to live in?

They probably envision living in a society that promotes human dignity, and their answers could help guide them toward a career that helps others, not one simply focused on a big paycheck.

“The whole idea is that deep down inside, human beings desire to be selfless and want to do good and not just make money,” Dowd said. “I think his message really says something about the importance of finding effective ways to promote integral human development. He inspires us to conduct research that helps us understand our potential as individuals and accept responsibility for the well-being of others.”