Muhammad Yunus, the recipient of the 2017–18 Ford Family Notre Dame Award for International Development and Solidarity, is an economist, social entrepreneur, and Nobel Laureate, heralded around the world as a pioneer of microfinance. More recently, he has become known for his efforts to harness capitalism as a force for good that promotes equitable human development and global sustainability.

As a young professor in his native Bangladesh in the 1970s, Yunus reached into his own pocket to give tiny loans to village basket weavers who lacked access to credit. Finding the experiment remarkably successful, he went on to develop “micro-loans” that not only allowed the very poor to survive but encouraged the personal initiative and enterprise needed to pull themselves out of poverty.

Yunus is renowned as the “banker of the poor” for his 1983 establishment of the Grameen Bank, which pioneered the extension of microcredit by giving tiny loans to Bangladesh’s rural poor, empowering borrowers—97 percent of whom are women—to interrupt the cycle of poverty by recognizing and mobilizing their own capabilities. Based on principles of trust and solidarity, it is a model that has since swept around the world.

In 2006, Yunus and the Grameen Bank received the Nobel Peace Prize for their work to “create economic and social development from below.”

“Every single individual on earth has both the potential and the right to live a decent life,” wrote the Nobel Committee. “Across cultures and civilizations, Yunus and Grameen Bank have shown that even the poorest of the poor can work to bring about their own development.”

In 2011, Yunus cofounded Yunus Social Business, a nonprofit venture fund dedicated to solving human problems. It aims to bridge the gap between business and philanthropy by promoting social business as a sustainable alternative to long-term aid.

His latest work rejects the extreme concentration of wealth and environmental destruction of modern capitalism with its focus on self-interest. He proposes instead a new model of economics – based on a vision of human nature that recognizes altruism and generosity as fundamental and powerful driving forces – that serves the common good of all humanity while protecting the earth and its resources for coming generations.

“In capitalist theory, it is assumed that man is entirely driven by self-interest. That’s definitely not the description of a real human being... they want to help others,” he told The New York Times last year.

Born in Chittagong in 1940, Yunus studied at Dhaka University, then received a Fulbright to complete his PhD in economics at Vanderbilt University. He was the head of the economics department at Chittagong University when he first began microlending. He has written several books, including most recently A World of Three Zeros: The New Economics of Zero Poverty, Zero Unemployment, and Zero Net Carbon Emissions (Public Affairs, 2017).

Yunus has served on the International Advisory Group for the Fourth World Conference on Women, the Global Commission of Women's Health, the Advisory Council for Sustainable Economic Development, and the UN Expert Group on Women and Finance. He is currently the chancellor of Glasgow Caledonian University and a board member of the United Nations Foundation.

In addition to the Nobel Prize, Yunus has received dozens of honorary degrees, and he has been honored around the world for his efforts to eradicate poverty. He is the recipient of Bangladesh’s highest honor, the Independence Day Award (1987), the World Food Prize (1994), the King Hussein Humanitarian Award (2000), and the US Presidential Medal of Freedom (2009) and the Congressional Gold Medal (2013), among more than a hundred other awards. 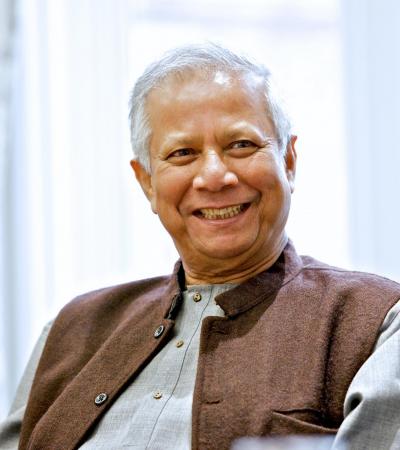 Global Citizenship for Human Development: A Conversation with Muhammad Yunus 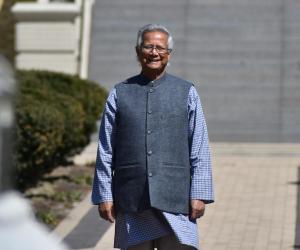 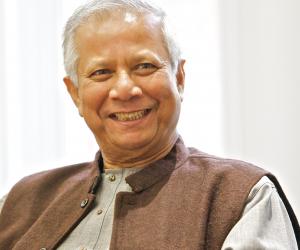 Nobel Peace Prize laureate and social business pioneer Muhammad Yunus will receive the Ford Family Notre Dame Award for International International Development and Solidarity at a ceremony on April 12 at the University of Notre Dame.