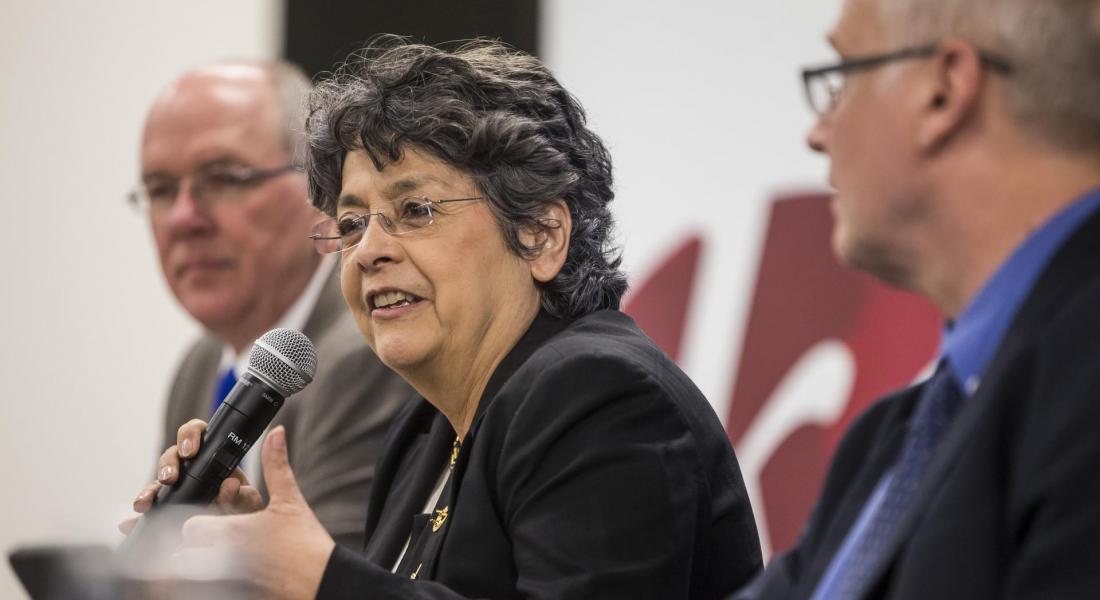 When Margarita López Maya’s husband needed surgery last year, the couple faced an unexpected roadblock: finding a healthy donor for the blood transfusion he would need during the procedure.

It wasn’t because of a lack of people willing to give. In the Venezuelan capital of Caracas, where food shortages have become endemic under President Nicolás Maduro, every potential donor had low levels of hemoglobin in his or her blood – a possible sign of malnourishment.

Even soldiers, who are usually well-fed and healthy, were found to have the same problem when they tried to give blood.

While Maya’s husband eventually received the transfusion he needed, their struggle to find something once so easily available highlights the deepening humanitarian catastrophe unfolding in the country.

“The crisis is affecting all the spaces of life,” said Maya, a retired professor at the Universidad Central de Venezuela who spoke as part of an April 25 policy discussion on Venezuela’s humanitarian crisis and its struggle for democracy.

The event, held at the Keough School of Global Affairs’ Washington, DC, office and attended by nearly 100 people, was sponsored by the Kellogg Institute for International Studies, the Washington Office on Latin America (WOLA), and the Inter-American Dialogue. A corresponding two-day panel on Venezuela was held April 26 and 27 at the University of Notre Dame.

At the Washington event, moderator Michael Coppedge, a Kellogg faculty fellow, noted the mounting crises within the South American nation: falling oil exports, food and water shortages, power blackouts, the reemergence of diseases once thought to be eradicated, and inflation of more than 1 million percent.

“Any one of these would be catastrophic for other countries around the world, but Venezuela suffers from all of them simultaneously,” he said.

Five panelists, including several from or based in Venezuela, described how citizens navigate everyday life in a country where transportation and urban infrastructure have crumbled and crime and violence have increased.

Businesses and public spaces are closed or half-empty, and the streets are vacant by 6:30 p.m. Residents barter for food. During blackouts, stores give customers food on credit until they can withdraw cash from ATMs. And instead of going to parties at night, people socialize over lunch.

“You go out when it’s necessary, but you retreat to your private life and try to do your best,” Maya said.

Maya said she and her husband now earn only about $10 a month. But their situation is better than others their age: they have enough savings to buy food.

But many rely on help from those who have already fled the country. Julia Yansura, an associate with the Inter-American Dialogue, said approximately one in four families in Venezuela receive money or parcels with medicine, clothing, and other necessities from relatives abroad.

Those remittances are worth $3.4 billion a year and make it possible for many, including the elderly, to remain in Venezuela.

“If you have a family member who has migrated, that is sort of an investment, a security policy for the whole family,” she said. Still, it is “a heartbreaking decision for people to stay or go.”

Meanwhile, as many starve, Maduro appears to be getting fatter. Photos of him eating at a pricey restaurant in Turkey last year stunned residents, said Verónica Zubillaga, an associate professor at the Universidad Simón Bolivar.

Venezuelans “despise and reject Maduro,” she said. She and other panelists described how, during power blackouts, it’s common for someone to yell “Maduro!” and be met with mocking laughter and an expletive in response.

“When you see thousands of people in the streets, they are brave people who are taking risks,” she said.

David Smilde of Tulane University is a senior fellow at WOLA and, like Maya, a former Kellogg visiting fellow. He said support for Maduro has dropped from 20 to 15 percent – a figure that, while low, is “pretty impressive if you think of how bad the conditions are in Venezuela” but indicates support for the broader Chavismo ideology.

According to Smilde, Maduro has adopted a wait-it-out strategy toward opposition leader and self-declared president Juan Guaidó, who has been recognized as Venezuela’s leader by more than 50 countries.

Maduro likely believes that arresting Guaidó will increase international pressure and popular opposition against the regime.

“I’m sure it’s something they talk about all the time, but…they think that time is on their side and if they continue on, the opposition will peter out,” Smilde said.

Maya said much of Maduro’s support– which she estimated at closer to 10 percent – is is rooted in fear. Many public sector employees worry about losing their jobs or holiday bonuses.

“The administration has a very sophisticated propaganda apparatus that makes it believe they know if you voted against Maduro,” she said. “There’s a lot of fear.”

Guaidó represents a fresh face in politics, and for many Venezuelans, hope. But Maduro retains the support of a key sector: the military. And convincing troops to abandon him could be difficult.

Yansura said a number of military officers have likely committed crimes and are nervous about the repercussions they could face under Guaidó. That puts the US-backed politician in a difficult position if he hopes to win over the military establishment.

“Do you really want to sit down at a negotiating table with people who have done despicable things?” she said.

Meanwhile, Venezuela’s future remains murky. Some in the US and elsewhere have floated the idea of a military intervention to depose Maduro, but several panelists said a negotiated agreement, while difficult to reach, remains country’s best option.

“Negotiations have proven heartbreaking and disappointing and far too prolonged, but I won’t say they have no chance,” Yansura said. “Frankly, the alternative to negotiation is also heartbreaking.”

Smilde said the failed attempts at dialogue and mediation in Venezuela have been frustrating, but “these things are iterative and have to build on past processes.” He pointed to other countries – Northern Ireland, Chile, South Africa, Poland – that have emerged from seemingly intractable problems without resorting to fighting.

Smilde said neither the country’s courts nor mass demonstrations will topple Maduro.

“A pressure collapse scenario is just not going to happen,” he said. “There’s going to have to be some kind of deal that will be cut.”

Maya warned that a military intervention would devastate the country without the promise of moving toward democracy. A way out of the crisis will likely involve a negotiation with the Venezuelan military, which might agree to replace Maduro with another leader.

“All scenarios pass through the military,” she said, but added: “I’m not sure there’s going to be a peaceful way out.”

Algerians Have Been Protesting For a Year. Here’s What You Need To Know.

Former Dissertation Year Fellow Tahir Kilavuz co-authors an article titled: "Algerians Have Been Protesting For a Year. Here’s What You Need To Know" for the Washington Post's Monkey Cage.