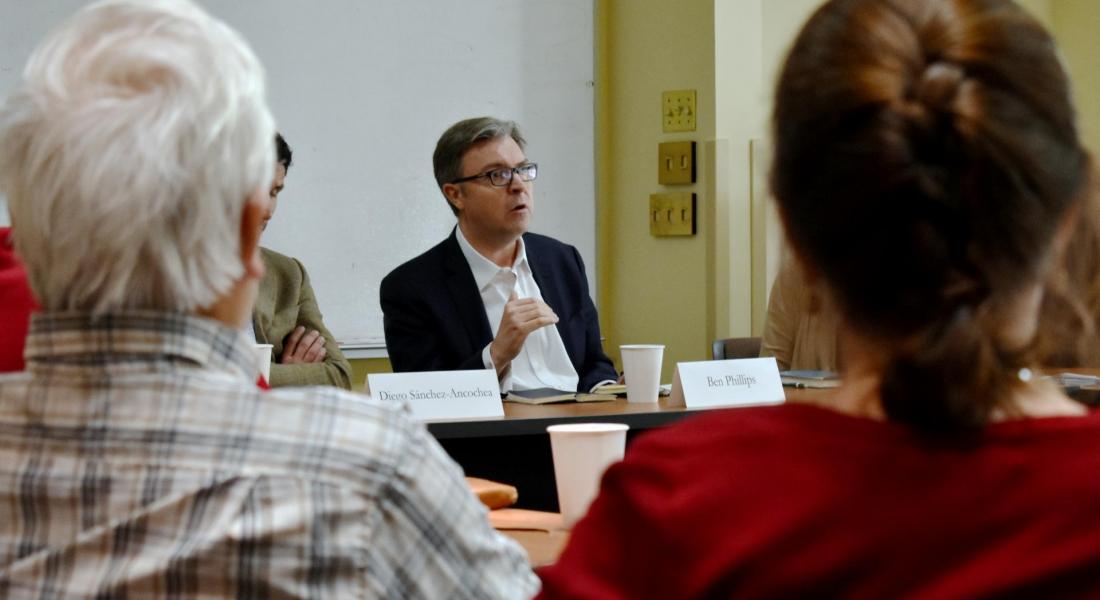 Calling the staggering disparities between the world’s richest and poorest “immoral," a group of scholars and practitioners argued this week at a conference co-sponsored by the Kellogg Institute for International Studies that rising income inequality can be curtailed.

But to do so, leaders must be pushed – by academics, by faith groups, and by activists – to act against their own interests and change a system that benefits only a tiny handful of elites.

“This is about power,” said Winnie Byanyima, executive director of Oxfam International. “This won’t be solved by tweaking a few policies here and there, but by building broad movements and saying, ‘This is what we want.’”

Byanyima was among nearly two dozen panelists who took part in “Democracy and Inequality in the Americas,” organized by a group of Kellogg scholars whose work focuses on inequality.

One of them, Faculty Fellow Ray Offenheiser, decried the inequality that has left the 26 richest people in the world with as much money as some 3 billion of its poorest.

“Along with climate change, confronting inequality is perhaps the major problem confronting us in the 21st century,” said Offenheiser, a former president of Oxfam America and a distinguished professor of the practice at the Keough School of Global Affairs. He is also director of the Notre Dame Initiative for Global Development, which co-sponsored the conference.

Questions surrounding inequality go to the heart of Kellogg’s core research themes of democracy and human development, and the Institute’s focus – inspired by Catholic social thought – on the equal worth of all people, according to Director Paolo Carozza.

“Inequality in society raises profoundly troubling questions when we concentrate on the centrality of human dignity,” he said.

The conference, held April 8 and 9, drew presenters from the University of Notre Dame and other schools, as well as think tanks, activist groups, and non-governmental organizations.

In addition to Offenheiser, the event was organized by three Kellogg visiting fellows: Victoria Paniagua, a political scientist who will be a Max Weber Fellow at the European University Institute in fall 2019; political economist Diego Sánchez-Ancochea, a professor at the University of Oxford; and Ben Phillips, the Hewlett Fellow for Public Policy and co-founder of the Fight Inequality Alliance.

Phillips said combating inequality and injustice is painstaking work: “We sometimes think that passion is enough, and it’s not.” He emphasized the importance of academic, religious, and secular groups learning from each other and from previous social movements.

Panelists highlighted the links between governance and inequality, addressing topics including redistributive policies and how to organize grassroots anti-poverty movements.

Luis Felipe López Calva, the United Nations Development Programme’s regional director of Latin America and the Caribbean, said inequality undermines the rule of law – the principle that the same set of rules should apply to everyone – and shows “the rules are designed to protect the powerful.”

While inequality has declined in Latin America since the mid-1990s, he said, the region “is not a middle-class society” but a vulnerable one.

“Many are not living in poverty but are vulnerable to a shock in the system,” he explained.

Byanyima noted that “behind these big numbers (on income disparity) are real people.” She described employees at a US chicken factory who had to wear diapers to work because they weren’t allowed to take restroom breaks and suffered repetitive strain injuries so severe they couldn’t hold their own babies.

Thea Lee, president of the Economic Policy Institute, said nearly all of the gains seen in the United States economy in the last four decades have gone to the top 1 percent or so.

Lee, former deputy chief of staff at the AFL-CIO, blamed rising inequality on a series of conscious policy choices, from attacks on unions to policies that prioritize combating inflation over reaching full employment.

Meanwhile, those in power have convinced the public to accept the status quo even as they are “working longer and harder and yet can’t make ends meet, and their kids are living in their basements with their college degrees.”

Liz Theoharis, director of the Kairos Center and coordinator of the Poverty Initiative, emphasized the importance of academic research in diagnosing the problems that contribute to poverty and inequality – and making sure activists are fighting the right solutions.

She said that to be successful, social movements that fight inequality must involve a large section of society, including the poor.

“Those movements have to be led by those most impacted by the problems we are trying to solve,” she added.

What gives you hope that inequality can be beaten?
"Awareness of inequality as a distortion that has to addressed." - Luis Felipe López-Calva, United Nations Development Programme Director for Latin America and the Caribbean

What gives you hope that inequality can be beaten?
"People are organizing to challenge power."  - Winnie Byanyima, Oxfam International Executive Director

What gives you hope that inequality can be beaten? "A broad-based coalition so that we don't have groups that can be played off against each other." - Thea Lee, Economic Policy Institute President

What gives you hope that inequality can be beaten?
"People in the streets" - Hector Castanon, Fight Inequality Alliance Latin America Convenor

What gives you hope that inequality can be beaten?
"That there is a movement growing that is led by those who are most impacted" - Rev. D.r Liz Theoharis, Poor People's Campaign National Co-Chair