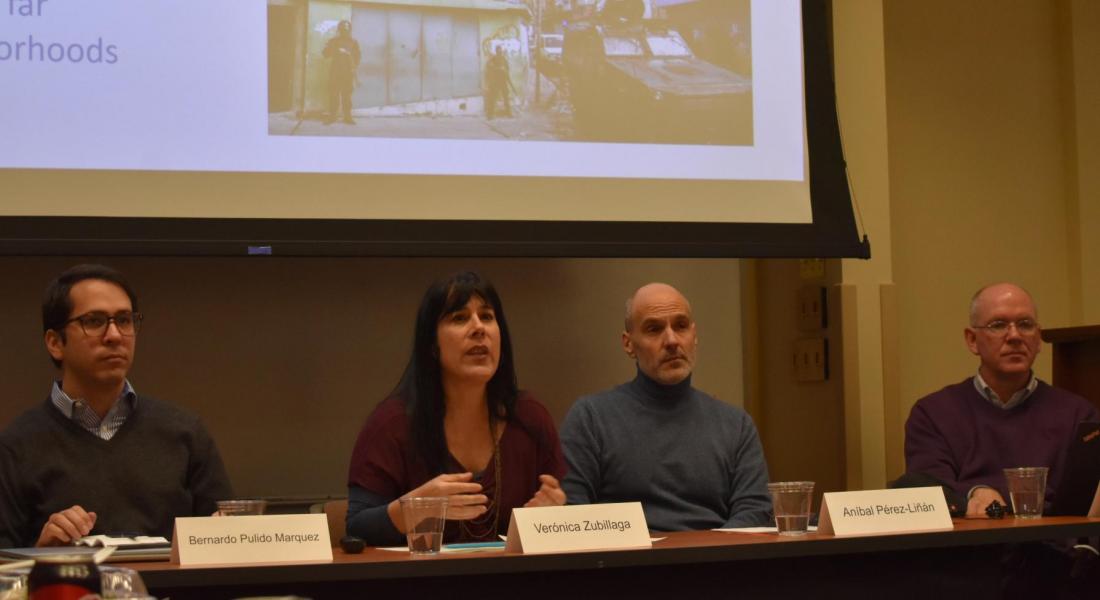 In Venezuela, food is increasingly scarce, millions have fled the country in recent years, and two men have claimed the presidency in the past few weeks.

But even now, despite mounting public protests against President Nicolás Maduro and the withdrawal of most international support for his government, Venezuela remains without a clear path out of its economic and humanitarian crisis.

That’s according to a panel of experts who spoke February 12 at the Kellogg Institute for International Studies about the future of the Latin American nation.

“We are now at this kind of juncture in Venezuela,” Faculty Fellow Aníbal Pérez-Liñán, a professor of political science and global affairs, told a packed room of faculty and students at the Hesburgh Center. “We are here to speculate about what will happen in the next few weeks, but the reality is that nobody knows.”

While Maduro’s hold on power seems solid for now, United States sanctions targeting Venezuela’s critical oil sector are poised to bring more economic heartache to a country already wracked by hyperinflation. Meanwhile, opposition leader Juan Guaidó declared himself president on January 23 and has been recognized as the country’s legitimate leader by the US and dozens of other countries.

Visiting Fellow and event moderator Claudio Orrego, the former governor of Santiago Metropolitan Region, called Venezuela’s situation “probably the most profound social, political, and economic crisis that the region has faced in decades.”

Pérez-Liñán predicted that Venezuela won’t transition to democracy as long as Maduro remains in power – or, conversely, unless Maduro’s Socialist Party backs such a move.

That’s in part because some 20 percent of the population still backs Maduro, suggesting there is support for the ideology of his predecessor, former president Hugo Chavez.

“Any attempt to suppress this segment of the population in the future will backfire. Any future of Venezuelan democracy will have to incorporate the Chavismo party to survive in the future,” Pérez-Liñán said.

PhD Fellow and doctor of juridical science candidate Bernardo Pulido Marquez, who is also Venezuelan, said Guaidó comes from a military family, which could help him make inroads with Maduro supporters: “Having that kind of background has permitted him to speak to those sectors of the population.”

The panelists addressed some of the difficulties the opposition faces in its attempt to gain control of the country, such as deciding whether – and how – to extend amnesty to military officials who now back Maduro. They also spoke of rising government-backed violence.

“The Venezuelan police forces have become one of the most lethal forces in the whole world,” said Visiting Fellow and Venezuela native Verónica Zubillaga, who added that the number of people killed in street protests is rising, particularly in poor neighborhoods.

Police have become increasingly aggressive in systemically raiding homes and stealing items like phones, tablets, and even food. Zubillaga quoted one resident who described police efforts to “clean,” or kill, people living in certain areas.

Faculty Fellow Michael Coppedge, a comparative political scientist and a principal investigator with the Varieties of Democracy project, said that in opposing Maduro, the US isn’t supporting the overthrow of a democratically elected government but rejecting a leader whose election is widely seen as a sham.

Venezuela’s dependence on the US as a key market for its oil could ultimately lead to Maduro’s downfall.

For the US, Coppedge said withdrawing its recognition of the current government “has big financial consequences, and it gives the US unprecedented leverage over what’s going to happen.

“This is the equivalent of stepping on the oxygen going to a deep sea diver. This really escalates things, and somebody has to come up for air pretty soon,” he said. “I think something major is going to happen pretty quickly.”