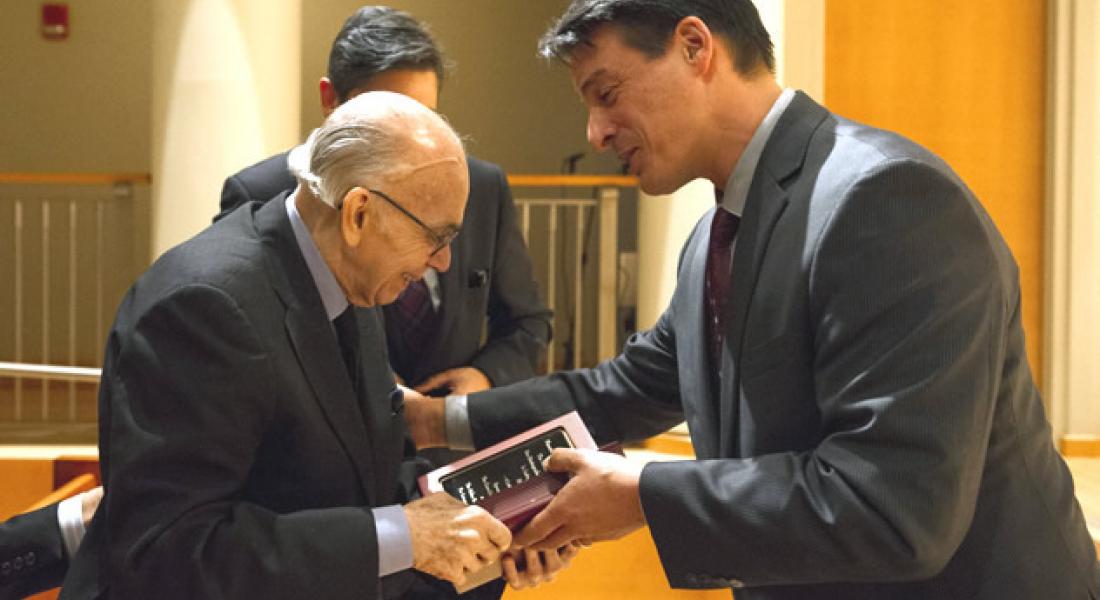 Kellogg Institute for International Studies Director Paolo Carozza, who made the presentation, honored Abreu for "his extraordinary life work"—the creation and nurturing of El Sistema, a transformative network of music education centers and youth orchestras that now reaches around the globe.

Trained as an economist, organist, and conductor, Abreu founded El Sistema as an antidote to the violence of his native Venezuela in 1975. The self-esteem and character his students develop through rigorous arts training helps them break out of the cycle of poverty, he believes.

"Music is an agent of social development in the highest sense, because it transmits the highest values—solidarity, harmony, mutual compassion. It has the ability to unite an entire community," Abreu has said on several occasions.

"I am proud of how our students displayed their best musicianship forMaestro Abreu, who is one of the most influential figures in music today," says Téllez, a fellow Venezuelan.

"Abreu believes that the discipline of orchestral practice can transform the lives of children at risk by creating a new family and a new sense of identity for them, and he has applied this notion to deliberately overcome the terrible economic and social hardships endured by children in Venezuela. His work has been extraordinary."

The countless children who attend El Sistema's music centers in Venezuela receive free instruments and lessons and no child is turned away. Some of Abreu's students have become international stars—Gustavo Dudamel, music director of the Los Angeles Philharmonic, is the most famous example—and El Sistema's success has been replicated in more than 25 countries around the world, including the US.

The award ceremony had been postponed several times after it was initially planned to take place in Venezuela. In the end, it was especially fitting that Maestro Abreu accepted the Prize on the Notre Dame campus as the event marked the 12th and final Notre Dame Prize presentation.

Since 2000, the Notre Dame Prize for Distinguished Public Service in Latin America has celebrated the significant role visionary public figures play in strengthening democracy and improving the well-being of citizens across Latin America and the Caribbean. In a long partnership between the Coca-Cola Foundation and the Kellogg Institute for International Studies, the University has honored a dozen Latin American leaders in a range of fields for their efforts to enhance the regions public welfare. Previous recipients include:

"Each in his or her own way, these distinguished figures exemplify—in their courageous and persistent efforts to make their countries, the region, and even the world a better place—the critical challenges of democracy and human development that lie at the heart of the Kellogg Institute's work," said Carozza.

The award carries a $15,000 cash prize, with a matching amount donated to a charitable organization recommended by the laureate. Upon the recommendation of Maestro Abreu, the matching prize was donated to El Sistema.