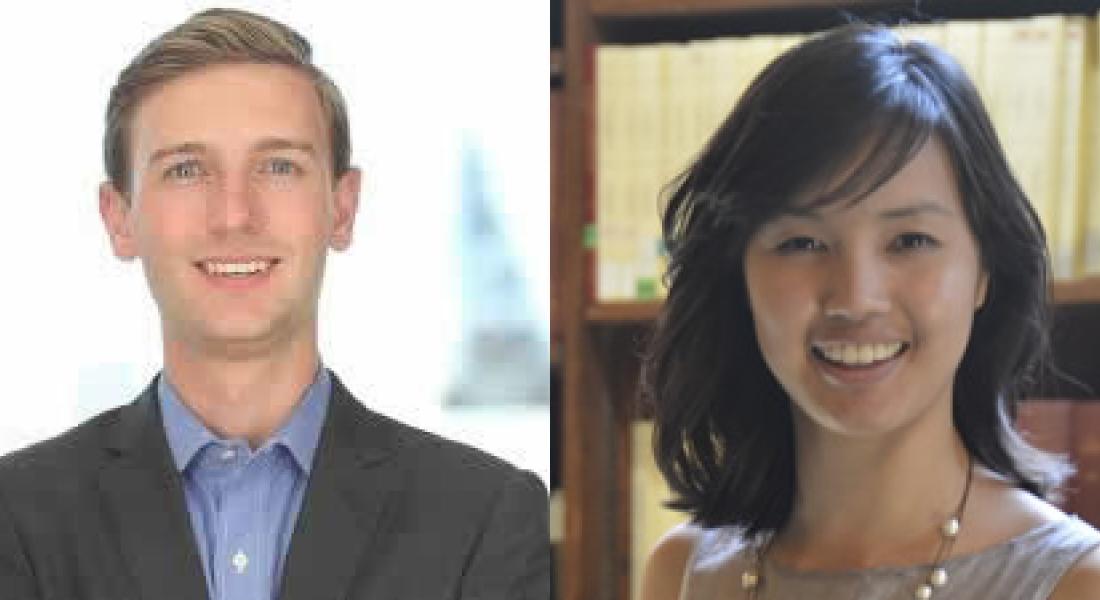 On a sunny afternoon in Washington DC a few years ago, Mitch Gainer ’12 was walking into the Eisenhower Executive Office Building when he was surprised to see Cherrica Li ’11 step out of the door.

Standing together on Pennsylvania Avenue, they were shocked to realize not only were they working across the street from each other, but on the same presidential trade initiative, the Trans-Pacific Partnership (TPP).

Gainer and Li both spent their time as undergraduates immersed in the Kellogg International Scholars Program (ISP), working closely with one another while serving as research assistants for Faculty Fellow Jeffrey Bergstrand.

As Kellogg International Scholars, they worked on updating Bergstrand’s Database on Economic Integration Agreements, which maps levels of economic integration among the world’s countries since the multilateral trading system was established by the 1947 General Agreement on Tariffs and Trade (GATT).

As they build their careers, their ISP work has taken them to positions at the White House and US Department of the Treasury as well as to graduate school and a business start up.

Upon graduating from Notre Dame with a degree in economics, Gainer stayed at the University for one more year, earning a master’s in political science. He then worked on the Obama Re-election Campaign, and after Election Day, went on to work at the Boston Consulting Group, taking a brief leave of absence to help run the Charlie Crist campaign for governor in Florida.

In 2015, Gainer joined the Office of the US Trade Representative at the White House and began work on the TPP.

Li’s path to working on the TPP was no less dynamic.

Graduating with a degree in economics and political science, she taught English on a Fulbright in Taiwan, then moved to Boston to pursue a master’s at the Fletcher School of Law and Diplomacy. She worked briefly as a research consultant for State Street Bank before joining the US Department of the Treasury in 2014.

Both Li and Gainer agree that their experiences with Bergstrand and the Kellogg ISP were critical at every step of their career.

“In management consulting, the work I did for Jeff helped me be a more effective consultant because of my experience handling data and managing team meetings with my fellow international scholars,” says Gainer.

“At the White House, the research on trade was extremely helpful when talking about the TPP to mayors, governors, businesses, and other interest groups or elected officials.”

For Li, the Kellogg ISP gave her a platform to explore her interest in China trade relations, and allowed her to delve into raw data to conduct original source research—all skills she continues to use to this day.

“Being able to say that you've mapped out the world's economic integration agreements makes for an amazing talking point with prospective employers.”

She also credits her Kellogg ISP research with giving her the basic language for understanding the global discourse on trade and helping her to land a job at a hedge fund tracking international commodity flows while she earned her master’s.

“Funnily enough, I landed the job because I was able to speak to Chile's copper trade with China, which I was familiar with because of my senior thesis on China’s free trade agreement strategy,” she says.

“My future boss was so excited he sketched out a map in the middle of the interview just to show me the exact shipping route these copper trades take.”

Looking toward the future

In 2015, Gainer left his government position to enroll in a three-year dual degree program offered by the University of Pennsylvania Wharton School MBA and the Harvard Kennedy School MPA.

“In the future, I hope to work at the intersection of government and business while working with world class teammates on projects that are meaningful and impactful,” says Gainer.

“I am working on starting my own government services, social impact company: CitySense Technologies. Three years ago I would have never guessed I would end up at the White House or in business school. I don't believe I have gotten better at predicting my future.”

Now at the US Department of the Treasury, Li works for the nation's top financial diplomats on issues involving U.S. trade policy and US–China bilateral economic relations.

“Right now, my work means promoting the economic well-being of others and fostering the conditions for global peace and prosperity,” says Li.

“I still pinch myself some days that I get to apply what I've learned, including from my time in ISP, to advancing US policies that promote global economic growth and stability.”