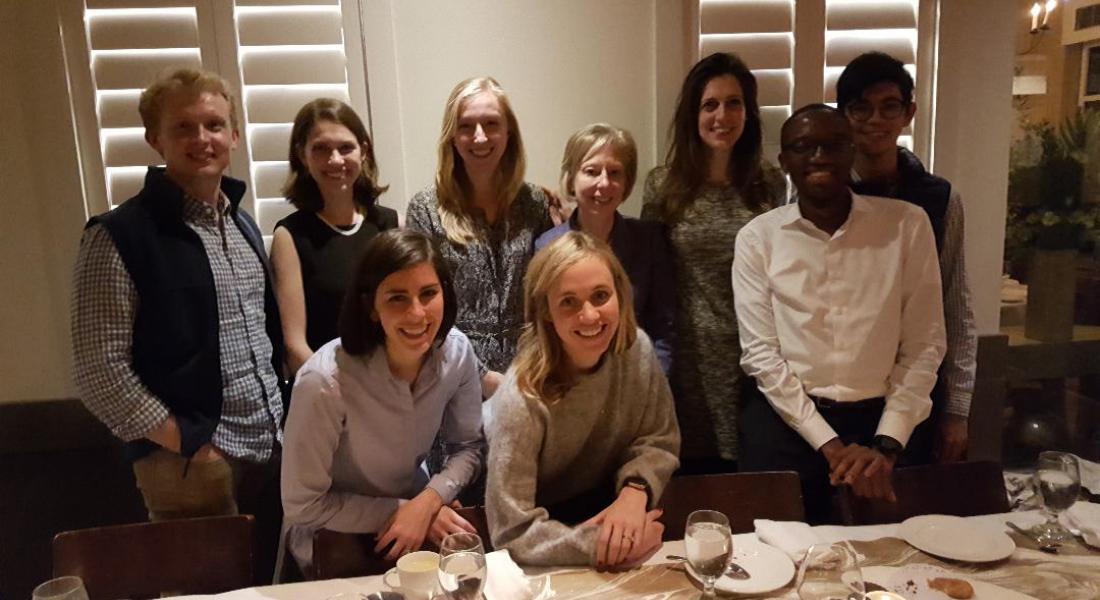 Graduates of the Kellogg International Scholars Program met October 16 in New York City in the first ISP gathering of its kind to discuss ways to better connect the program’s alumni with current students.

“ISP is such a rewarding program for undergrads,” Catherine (Reidy) Kress ’13 said. “We all gained immensely from our experiences in the program and want to find ways to pay it forward.”

Over dinner at Sarabeth’s Central Park South, the eight alumni – who now attend graduate school or work in fields such as commodities trading – also brainstormed ways to help ISP grads find each other.

Holly Rivers, the Institute’s associate director, said ISP provides a unique community for students with similar research and intellectual interests – one she wants to see continue and expand even after they leave the University of Notre Dame.

“ISP’s strengths go beyond the faculty mentorships,” she said. “The relationships students have with each other are valuable, and we’re trying to find more ways to make those connections happen.”

Brian Mukhaya ’17, an accountant at Deloitte, had been in touch with a few ISP alums in New York City but didn’t know so many lived in the area.

“New York, like most major cities, can be very overwhelming. It would be very helpful to tap into the existing ISP network,” he said. “It was really good to get everyone together and hear everyone’s experiences post-Notre Dame. ISP was a large part of my experience at school and I would love to retain a connection with that community.”

Nearly 150 students have graduated from ISP, the Kellogg Institute for International Studies’ signature program for undergraduates, since its inception in 2003. ISP pairs sophomores with professors to assist in their research, with the apprentice-like relationships often lasting for the duration of students’ time at Notre Dame.

Kellogg ISP was the first program of its kind at the university and has served as a model for other student-faculty partnership programs on campus. Seventy-one students are currently participating in the program.

A key goal of the new initiative is to help undergrads tap into the strength of the program’s alumni network.

Kress, an advisor to the chairman of the BlackRock Investment Institute, said alumni are eager to mentor and support current students and can introduce them to career options they may never have considered.

“When you’re in school, you have no idea the range of things you can do outside academia,” she said.

The former students recommended ways to help them stay in touch with each other and with the professors who mentored them: by hosting tailgates or open houses at the Institute during home football weekends, and by strengthening social media pages for alumni.

They also suggested creating local alumni chapters in cities with a strong ISP graduate presence, such as Washington D.C., to coordinate future meet-ups.

“Moving anywhere after graduation is intimidating if you don’t know anybody in the area,” said Evelyn Bauman ’16, a researcher at the Eurasia Group. She learned about the job from Kress, who previously worked at the company.

Connecting with other grads can serve as a source of inspiration, Bauman said.

“You’re getting ideas from other people in other career fields and thinking, ‘Oh, I would actually be interested in that too,’” she said.