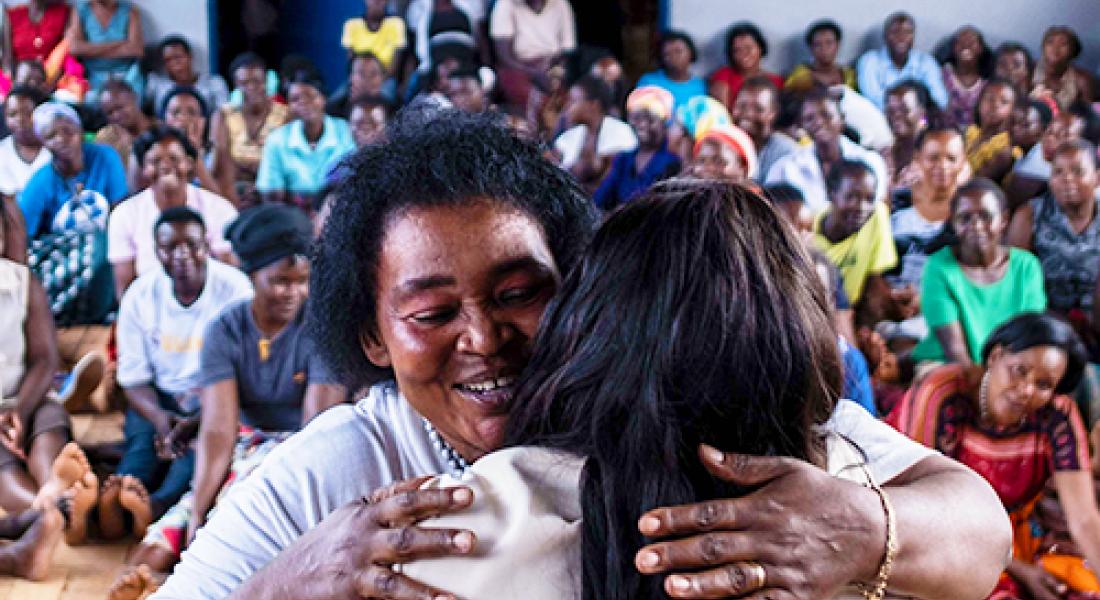 A Ugandan nurse who founded an organization for impoverished women and children with HIV/AIDS will receive the 2019 Ford Family Notre Dame Award for International Development and Solidarity this month at the University of Notre Dame.

Rose Busingye is president of Meeting Point International, a Kampala-based nongovernmental organization that provides medical care, schooling, and other services that help patients increase their self-sufficiency and develop social networks.

MPI’s mission emphasizes emotional as well as physical healing. In particular, Busingye focuses on helping patients recognize their inherent dignity and worth in a society where they are often shunned because of their medical diagnosis.

“Rose recognizes that she needs to treat the inside as well as the outside of the person,” said Rev. Robert Dowd, CSC, director of the Ford Program in Human Development Studies and Solidarity. “She’s not a heart surgeon, but she helps heal hearts.”

Busingye will receive the award from the Ford Program, part of the Kellogg Institute for International Studies, on Sept. 12 at the Hesburgh Center auditorium. The ceremony will be followed by an armchair discussion with Busingye on “The Value of a Life: AIDS, Outcasts, and the Search for Dignity in Uganda,” hosted by Faculty Fellow Clemens Sedmak, a professor of social ethics at the Keough School of Global Affairs.

Rose, he said, “makes it a point to see a person as someone with something to give to the world. She makes sure that everybody understands that these women are amazing people and so much more than patients suffering from a chronic condition.”

The Ford Family award is given annually in recognition of substantial contributions to human development through research, practice, public service, or philanthropy.

According to Dowd, Busingye embodies the Ford Program’s research and teaching focus on integral human development, a holistic model of human flourishing rooted in Catholic social thought that emphasizes the importance of being connected to others.

“Rose is doing the kind of work that promotes integral human development and those of us seeking to do the same have much to learn from her efforts,” he added. “She accompanies women in ways that free them up and helps them to make the most of their God-given potential.”

Busingye, who is also a midwife, started in MPI in 1993 after meeting HIV-positive women in the slums of Kampala who refused to take antiretroviral medications that could slow the progress of their disease. They believed their lives were meaningless; Busingye sought to convince them otherwise by telling the women they were loved and by creating a de facto family for them within MPI.

She explained on MPI’s website the philosophy behind her work: “The greatest need of a human being is the need of belonging....MPI creates simple environments where each person can find it easier to belong and experience love.”

Dowd noted that many of the women assisted by MPI have experienced emotional or physical abuse, including rape. Some are from northern Uganda and were brutalized by the Lord’s Resistance Army, a guerilla movement that terrorized the region for more than 20 years starting in the mid-1980s.

Many of the women are angry, resentful, and lonely. One of Busingye’s strategies for helping them deal with their emotions is by simply listening to them: “By listening to them, she helps them to recognize that they are valued and that they have value,” he said.

“In giving this award to her, we’re trying to raise the awareness of important work that often goes unrecognized,” Dowd said. “Some of the best work going on in the world is where it’s not being recognized, where there’s not a lot of PR for it, where it’s not being backed by millions of dollars, and we want to highlight that work.”

In addition to helping people reflect on the importance of listening, Dowd added that the Ford Program hopes giving the award to Busingye will spark new questions for future research within the Keough School and its constituent units.

The Ford Family award is named in honor of University Trustee Emeritus Doug Ford ’66 and his wife Kathy, whose generosity helped establish the Ford Program.

The award presentation will be held at 5 p.m. in the Hesburgh Center Auditorium. The event is open to the public and will be followed by a reception.