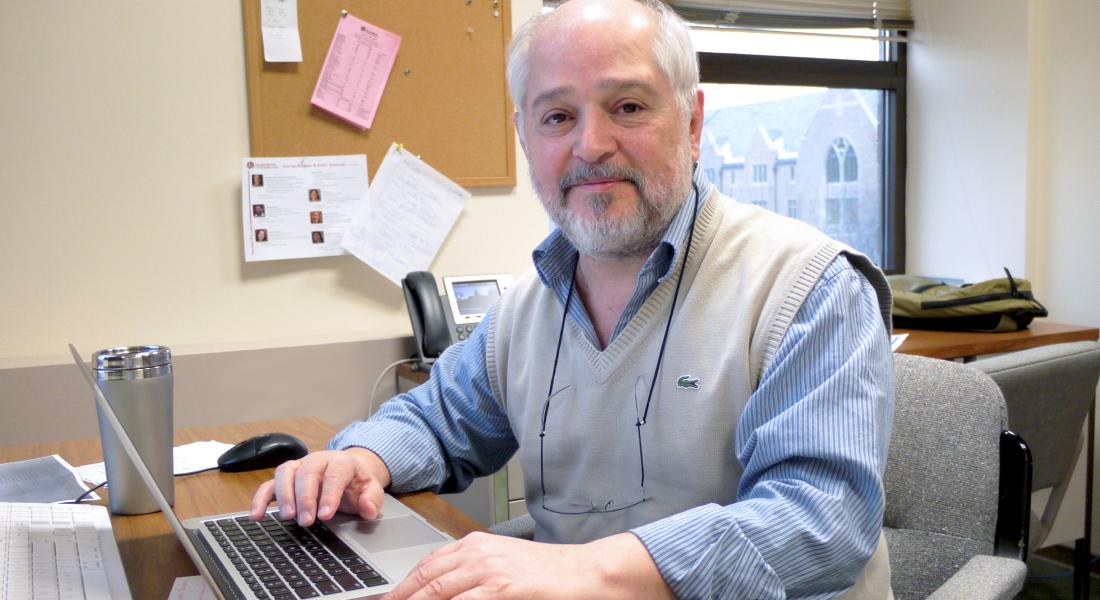 The Kellogg Institute’s long-standing relationship with Brazil’s scholarly community was deepened in 2014 with a five-year agreement with the Brazilian Fulbright Commission to establish a visiting fellowship for prominent senior researchers as part of the Visiting Fellows Program.

The second holder of the Brazilian Fulbright Distinguished Chair in Democracy and Human Development, Henrique Carlos de Oliveira de Castro has been in residence at Kellogg this fall. He has immersed himself in the life of the Institute and reveled in a semester that has provided him with the opportunity to think broadly and to ponder big questions.

“At Kellogg, I have had the academic's greatest luxury—time to think,” he says. “Along with that, I’ve benefited from an excellent research atmosphere and a very engaged group of scholars from different disciplines who have been generous with their expertise and insights."

At Universidade Federal do Rio Grande do Sul (UFRGS) in Porto Alegre, Brazil, Castro teaches political science and international relations and is part of a research team of four faculty members and about 20 graduate students. The Brazilian principal investigator for the World Values Survey since 2000, he previously taught at the Universidade de Brasilia.

Is Human Development a Condition for Democracy?

Among the big questions that Castro has had the time to focus on at Kellogg is the interplay between democracy and human development.

The genesis for his investigations has been Castro’s deep concern with the inequality that exists in the modern world.

“While Brazil has experienced incredible economic growth in the last 20 years, the inequality is pronounced,” he explains. “When a family making the equivalent of $2,000 annually is considered ‘middle class,’ it is easy for people to say: ‘Who cares about democracy? I want to support my family!’”

Castro’s investigations into relationship between democracy and human development are at a very preliminary stage—one in which he is asking many questions and “looking for clues.”

In an effort that involves both quantitative and qualitative data, a first task is to select the most rigorous and accurate methodological tools. One is the well-established World Values Survey—and another is the new Varieties of Democracy (V-Dem) project, which measures democracy systematically through time and space (and for which Kellogg is the institutional home in the United States).

“He aims to revise one of the most central claims in comparative politics: that economic development promotes democracy. He reminds us that only a holistic notion of human development should matter, and that it should matter for egalitarian democracy specifically.”

While such variables as per capita income, education, and life expectancy must also feed into Castro’s analysis, he is trying to tease out and incorporate some subjective measures as well.

“To properly measure human development, we must consider to what degree people feel that their lives are fair or whether they can improve their quality of life,” he says. “Those variables are often forgotten or ignored.”

His thinking in this area has led to a related and perhaps quixotic project: working with his team in Brazil to improve the UN’s Human Development Index (HDI). “There is real public value in building an index that could be used as a tool to deal with complex comparative research such as monitoring the Sustainable Development Goals,” he says.

Engagement with Kellogg Deep and Continuing

In his time at the Institute, Castro has been an active and generous member of the Kellogg intellectual community, engaging deeply with faculty and students in a variety of ways. In particular, he was able to forge a new collaboration with Visiting Fellow Amy Erica Smith, whom he had met briefly in Brazil.

Over the semester, he took part in a Brazil roundtable she organized, and together they began to plan an innovative, dual-country conference that, thanks to video conferencing tools, will include participants at both the Kellogg Institute and at UFRGS.

With a focus on public opinion research drawing on the World Values Survey and the AmericasBarometer of the Latin American Public Opinion Project (LAPOP), where Smith previously worked, the April conference will investigate challenges Brazil currently faces in providing effective governance and services for all citizens. (See call for papers here.)

“I am grateful that Kellogg has given me and Henrique a chance to get to know each other much better this semester,” says Smith. “We have many research interests in common, and he has influenced the way I think about Brazilian politics. I look forward to continuing to work together.”

The conference reflects Castro’s resolve to go beyond standard disciplinary limitations in his work and to affect the lives of average citizens.

“I am not interested in the relation between democracy and human development only for the sake of scientific research or for creating a predictive model,” he says. “My real intention goes beyond academia, and aims to be useful to society in general. Reality is bigger than any discipline.”