Nora McGreevy is a freelance writer and researcher based in Chicago, IL. McGreevy currently writes daily for Smithsonian magazine, with a focus on history, art and culture.

This profile was current as of 2019 when she was part of the on-campus Kellogg community.

Nora McGreevy has worked with Professor Edward Beatty for three years. In her sophomore and junior year, McGreevy assisted Professor Beatty in his research on the emergence of a Mexican middle class during the Porfiriato. In the summer before she left for study abroad in Santiago, Chile (fall of 2017), McGreevy spent a month working on a research project about the consuming public of Mexico City, gauging the size and scope of the Mexican middle class through the lens of newspaper advertisements in popular newspapers. After returning from Santiago, Chile, McGreevy developed her honors history senior thesis topic. In her interdisciplinary thesis, which combines historical and art historical elements, McGreevy will study the emergence of an experimental wave of free art schools in Mexico City in the 1920s-30s, the Escuelas de Pintura al Aire Libre. These small schools were a government-sponsored project for free art education that aimed to teach art to low-income students of indigenous descent. The thesis will focus on the global exchange of ideas and people that occurred within and surrounding these schools, framing the schools in the center of a global debate about art, artistic education and the education and production of young students.

McGreevy received a grant from the Glynn Family Honors Program to conduct research for her senior thesis in Mexico City and Washington, D.C, for three weeks at the beginning of summer 2019. She worked at the Archivo Historico de UNAM in Mexico City and the Smithsonian Archives of American Art in Washington, D.C. She then spent ten weeks working as a reporter for the South Bend Tribune, where she covered regional arts and entertainment news through Notre Dame’s Gallivan Journalism Program. In her free time, McGreevy is the Editor of Scene, the arts and culture section of The Observer, the daily student newspaper serving the University of Notre Dame, Holy Cross College, and Saint Mary’s College. She also leads gallery tours for Spanish classes through the Snite Museum Gallery Teachers Program.

Current Research
I am currently writing my senior History honors thesis about experimental art schools and post revolutionary politics in Mexico City in the 1920s-30s. 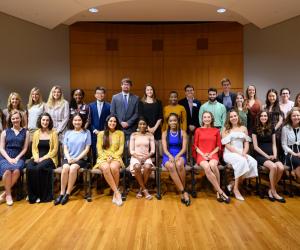 A number of graduating seniors affiliated with the Kellogg Institute for International Studies have received prestigious research grants or awards, while others are entering competitive graduate programs.