Katie Cessar currently serves as the National Coalitions Manager for the 1 st  Amendment Partnership (1AP). In her role, Cessar is responsible for building strategic relationships and strengthening partnerships with allies and community members to promote religious liberty. She also provides critical support as a high-level project manager to an executive oversight committee, to ensure clear communication with stakeholders and partners.

Cessar brings to 1AP significant professional experience working with the United States Congress. For nearly six years, she worked in the Office of Senator Pat Toomey (R-PA), overseeing a number of legislative issues including defense, foreign affairs and budget. During her time there, she also handled constituent relations, stakeholder outreach, and policy research for key initiatives of the Senator.

Prior to her joining 1AP, Cessar worked for the Embassy of Israel as a Legislative and Political Analyst. During her tenure there, she monitored and evaluated Congressional response to such high-profile issues as the relocation of the U.S. Embassy from Tel Aviv to Jerusalem, anti-Semitism, and funding of Israeli security and defense.

Cessar graduated from the University of Notre Dame with a B.A in Political Science and French. In her free time, she enjoys baking, seeing musicals at the Kennedy Center, and cheering on the Notre Dame Fightin’ Irish football team. 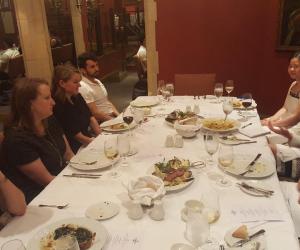 ‘There Are So Many Options’: ISP Alums Talk Career Paths, Networking in Washington

A group of former Kellogg International Scholars who work in Washington, DC, met recently to discuss ways to help undergraduates with an interest in government and policy launch careers in the capital.