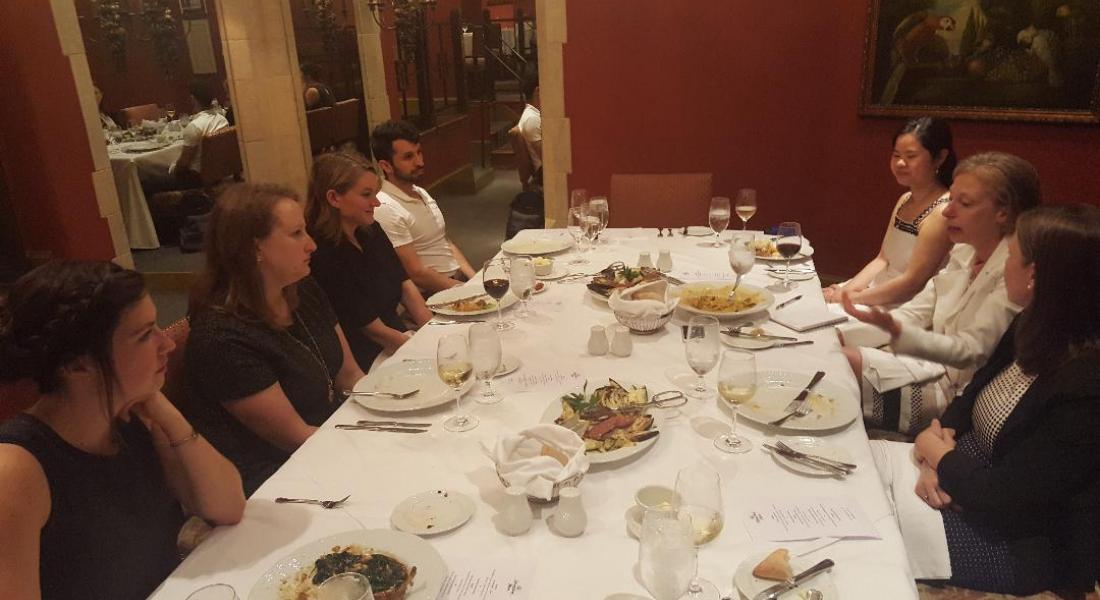 Job hunting is always tough. But it’s especially difficult in Washington, DC, where competition for political positions is fierce and pay for internships and early-career jobs is low or even nonexistent.

That’s according to a group of former Kellogg International Scholars–all of whom work in Washington – who met last month to discuss ways to help undergraduates with an interest in government and policy launch careers in the capital.

Their advice to those now in the International Scholars Program (ISP): Network. Think outside the box. And don’t be afraid to send cold emails to someone you don’t know.

“These students are very qualified and there are so many options,” said Stephanie Mulhern Ogorzalek ’11, a senior policy advisor in the US State Department’s Office of Global Women’s Issues.

The half-dozen alumni met over dinner at the downtown Henley Park Hotel, a short walk from a number of think tanks, embassies, and federal offices. They talked about the career paths available to ISP students and how to make connections in a city known to outsiders for its seemingly impenetrable job market.

Ogorzalek said many DC-bound undergrads think their post-graduation options are limited to law school, consulting, or – to make ends meet in one of the country’s most expensive cities –­ living with their parents. In talking with current students, she found that many “were just paralyzed that they were not going to get a job.”

“Having examples from alumni of things they can do can be very helpful,” she said.

The dinner was part of a new Kellogg Institute for International Studies initiative to expand the scope of its signature program for undergraduates by connecting former students with one another and with current students.

“We’re trying to find ways to make you accessible to the students and to make finding out what you do accessible to them,” Holly Rivers, the Institute’s associate director, told them. In recent months, those efforts have included hosting a Zoom meeting that gave ISP students the chance to ask alumni far from South Bend – including Ogorzalek – what they do at their jobs and how they got there.

Students asked her questions including: How do you find positions in DC? What does it even mean to work at the State Department? And, how important are language skills and overseas experience?

“You could tell that what I was telling them, they hadn’t really heard before,” Ogorzalek said.

Several at the May 30 dinner were surprised at the paths that had brought them to Washington.

“If you asked me in 2010 where I was going to be in nine years, I never would have guessed I’d be here,” said Matt Panhans ’10, an economist at the Federal Trade Commission.

Some described what are rites of passage for many young people trying to start their careers in DC: waitressing, babysitting, or bartending to make ends meet, and even couch surfing.

Their stories highlighted the unique – and critical – role of networking in Washington.

“Half the battle for working in nonprofits is getting that first job,” said Shannon Bugos ’16, who landed her current job in communications with the Truman National Security Project after a professor gave her a list of former Notre Dame students in the capital. She learned about the position after emailing each of them.

“You have to just talk to people. It’s the biggest thing,” she said. “I love talking to Notre Dame students, and I’m not afraid to get cold emails.”

Bugos noted that the 2020 presidential election gives ISP students an opportunity to get hands-on experience in campaigning and the chance to make crucial contacts, without moving to DC.

“You may be knocking on doors," the English and peace studies major said, "but it gives you contact with the people who could be setting up the next administration."

Lindsey Lim ’07, a financial sector specialist at the World Bank, emphasized the importance of spending time in Washington – even on your own dime – to meet people and learn the intricacies of job-hunting in the capital.

ISP pairs sophomores with a Kellogg faculty fellow to assist in his or her research, and the skills students learn through those partnerships can make them more marketable to future employers.

Katie Brandes Reilly ’05, an attorney at the Treasury Department, said many students don’t realize that their resumes go into a huge stack and remain unread unless they have a skill or experience that sets them apart – something ISP students typically have in abundance. For her, an internship in London gave her a talking point during interviews.

“There has to be something on your resume that gets you pulled out of the pile.  Everybody has that one unique thing,” she said.