This profile was current as of 2016, when she was part of the on-campus Kellogg community.

Evelyn Bauman, an international economics major, is a Kellogg International Scholar dedicated to fostering people-centered approaches to education and development around the world. She plans to pursue a master’s in public policy and to continue working to promote child development internationally.

Bauman’s interest in global affairs and a diverse set of experiences has given her a comprehensive understanding of development in different parts of the world. As an International Scholar, she worked with Faculty Fellow Catherine Bolten on research about education and children’s rights in post–civil war Sierra Leone.

Through an Experiencing the World Fellowship, Bauman taught French, English, and math in Saint Louis, Senegal, where she also conducted independent research on the efficacy of the community’s residential Islamic schools. Her senior thesis focused on the dual education system in Senegal and how Islamic schools impact student achievement.

In summer 2015, after a semester abroad in France, she interned on the Africa team at the National Endowment for Democracy in Washington, DC.

Bauman’s passion for education led her to immerse herself in the South Bend community, where she volunteered as a tutor at the Robinson Community Learning Center and as a mentor in Reading for Life, an innovative juvenile diversion program for first-time and low-status offenders.

As an International Development Fellow with AVSI in Port-au-Prince, Haiti, Bauman will work as a project assistant on new educational projects that focus on youth development. One aims to train teachers and another, in association with the Red Cross, concentrates on youth job creation to inhibit gang membership and violence.

The Association of Volunteers in International Service (AVSI) is an international nongovernmental organization founded in Italy in 1972. AVSI’s mission is to support human development in developing countries with special attention to education and the promotion of the dignity of every human person, according to Catholic social teaching.  AVSI currently operates in 38 countries of Africa, Latin America, Eastern Europe, the Middle East, and Asia, with over 130 long-term projects and relief operations directly benefiting around 4 million people in various sectors. AVSI personnel are directly involved in long-term field assignments together with hundreds of locally hired staff and supported by dozens of academics and senior practitioners.

For my senior thesis in International Economics, I will be continuing the research that I started during my ETW Fellowship in Senegal in the summer of 2013. I plan to study how household income and government funding affect education in Dakar, Senegal. I will be looking at the interactions between public, private, and religious schools and the local controversies that surround this topic.

During the summer after my freshman year, I received an "Experiencing the World Fellowship” from the Kellogg Institute to research residential Islamic schools in Saint Louis, Senegal. During my junior year, I also received an "Undergraduate Research Opportunity Program" (UROP) grant from the Institute for Scholarship in the Liberal Arts, as well as an “Intramural Research Grant” from the Kellogg Institute that supported my team’s participation in the Clinton Global Initiative’s Hult Prize 2015. This competition challenged teams of university students from around the globe to create social enterprises that increased and improved early childhood education in urban slums around the world. With support from the Kellogg Institute, ISLA, and the College of Arts and Letters, my team was able to participate in the regional competition in San Francisco in March 2015. 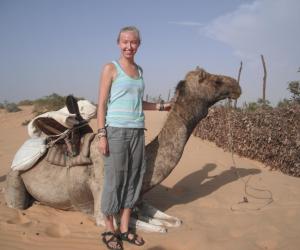 The Talibés and Islamic School System of Saint Louis, Sénégal