While at Notre Dame, Connor Hayes worked as a research assistant for Prof. Sean McGraw in the Department of Political Science through the Kellogg Institute's International Scholars Program; his work with Prof. McGraw focused on Irish electoral politics. His senior thesis, Outing the Party: Irish Political Party Engagement in the 2015 Same-Sex Marriage Referendum, argued that the referendum's success was in large part due to support from the predominant political parties at the time of the vote, and was awarded the Guillermo O’Donnell Prize for best senior thesis in the field of comparative politics. His thesis work built on previous research regarding the trial of Oscar Wilde, supported by the Nanovic Institute for European Studies, and regarding the history of the Irish queer & trans rights movements, supported by Keough-Naughton Institute for Irish Studies.

Since graduating, Hayes worked at a drop-in center for low-income individuals living with HIV through Jesuit Volunteer Corps NW, spent time on a congressional campaign in Western Pennsylvania, and is now in his third year at Stanford Law School.

Thesis Title: “Ireland's Equality Moment" - The Irish Marriage Referendum, and the Impact of Civil Society on the Democratic Political Sphere

My thesis research focuses on the May 2015 Irish same-sex marriage referendum, with a particular focus on the evolving ways that LGBT rights groups in Ireland have sought to impact the political system, and how this recent history functions within existing understandings of external groups influencing politics in democratic states. I spent the better part of a semester in Ireland working on the referendum campaign, and am using my thesis as a way to analyze everything I observed, and try to develop more broadly applicable lessons from the campaign. During my senior year I'll also be continuing past work with Fr. McGraw on how moral issues - especially abortion - are dealt with in Irish and European politics.

In terms of fellowships I've received, I have had two major opportunities to go to Ireland, both of which have significantly shaped the direction of my studies. During the spring break of my sophomore year, I was able to go to Ireland and conduct archive research in Dublin on the Oscar Wilde trials, thanks to a grant from the Nanovic Institute. I also had the opportunity during the summer after my sophomore year to conduct research in Dublin on the recent history of the Irish LGBT rights movement, thanks to the Irish Internship Programme run by O'Connell House and the Keough-Naughton Institute for Irish Studies, with supplementary grants from the Glynn Family Honors Program. 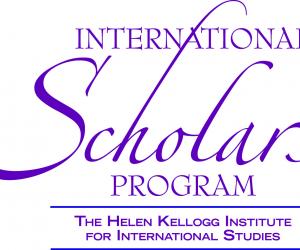 <p>Four Kellogg International Scholars have won major prizes from Notre Dame’s Department of Political Science for their outstanding theses in the fields of comparative politics and political theory.</p>