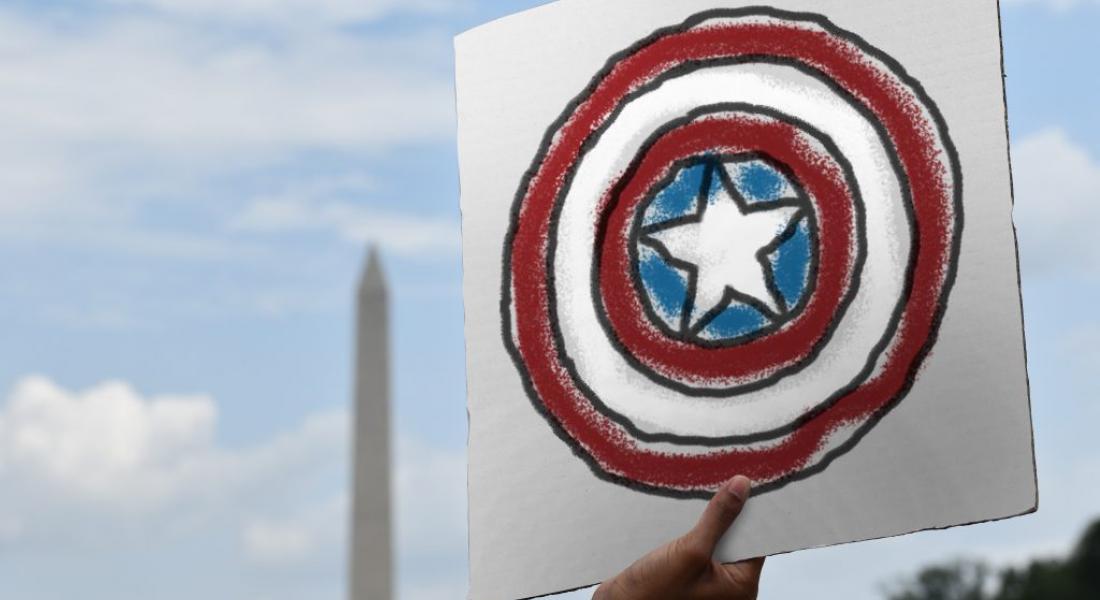 Can Captain America be Black? Marvel’s recent Disney Channel series, The Falcon and the Winter Soldier, tackles this question head-on. The story picks up from the blockbuster Endgame where Captain America, played by the White, blue-eyed Chris Evans, passes his shield to “the Falcon,” played by the Black actor Anthony Mackie. The Falcon hesitates in taking on the mantle of “the Cap.” He is riddled with doubt. He feels unworthy. His instincts tell him that he will not be accepted.

Literature and film, including science fiction, are mirrors to society. Star Wars, for example, in pitting a band of mystical warrior rebels against an evil empire, celebrates the triumph of freedom over totalitarianism. The third episode of the galactic saga—released in 2005, shortly after the US invaded and occupied Iraq—portrays the slow death of liberty for the sake of security to the “thunderous applause” of an interplanetary senate. In 2009, in an even less subtle critique, the film Avatar transports us to a future in which US corporations loot the resources of an alien planet while violently suppressing resistance from the Navi, primitive natives living on sacred land. Avatar remains to this day the highest grossing film of all time.

In 2016, Marvel’s Captain America: Civil War raises the question of exceptionalism: are superheroes above the law? In their attempt to save the planet from evildoers, do superheroes cause more harm than good? After all, they battle evil forces in the midst of heavily populated cities. Countless innocents are caught up in the fray. Should governments check and regulate superhero power for the greater good? It turns out that the various superhero characters are divided on the issue, with Captain America on one side and Iron Man on the other. Hence, “civil war.”

The Falcon and the Winter Soldier confronts racism, but it also engages global migration and security from threats posed by non-state actors. A band of terrorists operates in parts of Europe, Africa, and North America. Comprised of refugees and migrants seeking a safe place to live in dignity, their leader is a female of ambiguous ethnicity who speaks perfect English in a British accent, and her goal is to create one world with open borders. The world needs Captain America. But the new Cap is Black, suffering indignity of his own. The plot foregrounds a deeply American contradiction: racism and inequality at home; wars for freedom, peace, and human rights abroad.

Muhammad, Martin, Malcom
When he refused induction into the US Armed Forces during the Vietnam War, Muhammad Ali forcefully asked: why should Black Americans travel eight thousand miles to kill people who have done them no wrong? Why should they fight for the freedom of others while they have yet to realize their own freedoms? Why should they fight alongside the very people they are struggling against at home? Martin Luther King, Jr. likewise noted that there is “ . . .  a very obvious and almost facile connection between the war in Vietnam and the struggle I, and others, have been waging in America.”

In his 1967 speech “Beyond Vietnam,” King provided three arguments against the war. First, the money could be better spent at home. “Budgets are moral documents,” as scholar-activist David Cortright reminds us. Second, the poor bear an unfair burden in the war effort because they end up at the frontlines in disproportionately larger numbers. Third, the government effectively undercuts its advocacy for nonviolence in the struggle for civil rights at home by its militarism to advance freedoms abroad. In other words, America’s domestic realities make the war hypocritical. “You and I have never seen democracy,” thundered Malcolm X in his 1964 speech “The Ballot or the Bullet.” “All we’ve seen is hypocrisy.”

Malcolm, Martin, and Muhammad collectively diagnosed the problem, but each approached it in his own unique style. Malcolm channeled the founding fathers, advocating in favor of group identity and resistance: “give me liberty, or give me death.” Martin led with his moral imagination, proposing to build bridges across the divide: “I have a dream.” Muhammad inspired us with undeniable talent and irresistible charisma: “It’s hard to be humble when you’re as great as I am.” Together, they are a poetic embodiment of the three prisms through which we understand international relations: realism (power); liberalism (ideas); and constructivism (personality).  International relations theorist Stephen Walt writes that a combination of all three traits together move history: “our understanding would be impoverished were our thinking confined to only one of them.”


Captain America aims to capture this synthesis. His Black incarnation is charismatic, tough, and idealistic. When push comes to shove and he ultimately decides to pick up the shield, he does so with empathy for those who are driven to terrorism. He is capable of seeing beyond what is merely apparent. They are victims of circumstance, an outcome of the shortsighted policies of a global elite. After saving powerful world leaders from the terrorists, “The Cap” lectures them: “You have to stop calling them terrorists . . . These labels: terrorists, refugees, thugs. They’re often used to get around the question ‘why?’”

Confronting American imperialism
“Whether the United States is able to shape the greater Middle East,” argues Andrew Bacevich, “will matter less than whether it can reshape itself.” Twenty years after 9/11, the conversation has changed. We are now ready to confront the possibility that we are not merely innocent victims of senseless evil done to us. We are reaping the consequences of a world that we have made. In his primer on global literacy, Richard Haass observes, “The United States has been the world’s principal architect as well as its general contractor.” The US imperial project requires a global empire of bases, says Bacevich, to bring other nations “into compliance with American purposes.” This story of American adventurism abroad has been eloquently chronicled by, among others, David Vine in Base Nation, Chalmers Johnson in his three-volume trilogy, and most recently by Daniel Immerwahr in How to Hide an Empire.

Johan Galtung, the founder of the contemporary academic field of “peace studies,” narrates a similar story in The Fall of the US Empire, predicting that a series of contradictions in the multiple limbs of the imperial project—economic, military, political, cultural, and social—will result in steep decline. Together, these authors echo a prophecy of James Baldwin: “Until this moment there is scarcely any hope for the American dream, because the people who are denied participation in it, by their very presence, will wreck it. And if that happens it is a very grave moment for the West.” Is the prophecy coming true? Can we change course? Can one president or a few courageous politicians make a difference, or are the tides of history too strong?

“Looking back,” muses Barack Obama in his latest memoir, “I sometimes ponder the age-old question of how much difference the particular characteristics of individual leaders make in the sweep of history—whether those of us who rise to power are mere conduits for the deep, relentless currents of the times or whether we’re at least partly the authors of what’s to come.” They are likely a little bit of both. When Captain America goes global, he shapes history as an individual with super powers in faraway lands, but he also encounters his limits in the deep currents of political power closer to home. Advancing integral human development—the dignity and flourishing of every human being—requires integral thinking that is able to see connections between injustices everywhere. From that perspective, Captain America’s latest incarnation is an IHD warrior.

The historian and futurist Yuval Noah Harari says that cultures experience vitality and creativity because of their internal contradictions. Film is one artistic medium through which society attempts to square the circle, to cohere the incoherent. Whereas analysts and critics tend toward pessimism—indeed, some thrive on doomsday prophecies—blockbusters, responding to market forces, tend toward optimism. They need to make people feel good. In Avatar, the alien natives are saved by a former Marine who joins their ranks and masters their traditions—a White savior. In The Falcon and the Winter Soldier, Captain America wins, and he can be Black. We are assured that the system is self-correcting. But how will the contradictions of a freedom-loving empire be resolved in the real world? That script will not be sci-fi fantasy.