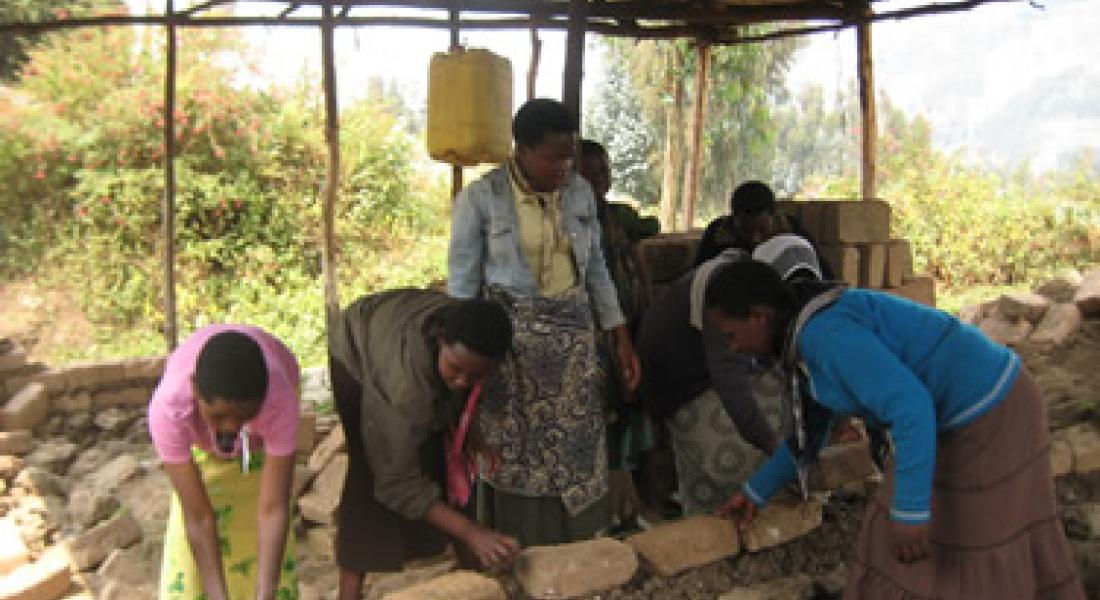 My project started off somewhat slowly as I was trading 3 weeks of labor with the YWCA of Rwanda for connections with possible interviewees. Although those initial weeks, officially the ethnography portion of my project (if 3 weeks can count as ethnography), did provide me with invaluable insights into Rwandan society and politics. I was able to adjust my interview questions accordingly, pick up a little Kinyarwanda and some social customs, and begin entering various social networks.

In addition, my quasi-internship with the YWCA of Rwanda allowed me to go on field visits to a number of their field offices and a number of their grassroots projects. As any Rwandan will tell you, Kigali is not Rwanda. The chance to see the rural areas outside of the capital, which is the majority of the country, was a much-needed reality check. I'm fairly capable when it comes to debating international development and poverty, tossing around statistics and jargon and sounding decidedly, if falsely, authoritative, but coming face to face with legitimate, abject poverty was a new experience, putting it mildly.

It is one thing to read about "the poverty trap", or whatever the latest buzz phrase happens to be, and it is another thing entirely to have a man quite literally beg you for a job in three languages in front of an entire village because you are white and look like a well-connected aid worker. There is studying development and there is looking genocide survivors and children as young as 11 in charge of families, Youth Caregivers in the lexicon, in the eye. Some look at you almost dreamily, as if your presence in the village means there might be a light at the end of the tunnel. Others could not care less about another "mizungu" (white person/colonizer). And still others simply eye you with suspicion, uncertain of your motives and actual ability to impact them. This aspect of my time here has been deeply beneficial, some of the most meaningful. It reminds me of why I'm even in the Ford Program in the first place.

I've been interviewing a range of civil society and private sector actors thus far. I'm hoping to begin government interviews tomorrow morning actually. I fear that I will run out of time just when the best of the interviews are going to start. If I had another month I would have incredible government access, particularly for a wayward undergrad. My network is beginning to expand remarkably quickly among low to mid-level elites in Kigali. The host family, who by the way have essentially adopted me in the best, most welcoming way possible, was a crucial jumping off point.

I will say, however, that the most important aspects of my time here have been a bit less academic in nature. In addition to my experiences with rural poverty and the intensely personal interactions I had with a number of impoverished Rwandans, I have been exposed to bits and pieces of the psyche of a post-genocide country. My host family father has talked at length about the genocide and life after it. He was a corporal in the RPF invasion force from 1990 through 1994. He came to his home village during the genocide only to find 8 of his 12 family members dead, his youngest brother hanging from a tree. He asked me if I could even imagine having 8 members of my family being killed, only to respond for me by saying how could I, for I only have 5 people in my entire family. He has taught me more than perhaps all of my interviews ever could.

I went to the Kigali Genocide Memorial and it, its victor's narrative aside, was remarkable in its own right. What made my experience a bit more real than almost anyone else's was that I actually saw coffins being added to a mass grave that holds just under 260,000 people. You could quite literally see, from where I stood looking down into a tomb stacked with coffins, genocidaires and survivors bumping shoulders in the streets of Kigali. The man who smashed your baby's head into a wall waves as he walks his kids to school while you mind your shop, wishing you had just one child left.

The ethnic identities may have been buried, but the grave is unsurprisingly shallow. They are discussed at the dinner table in hushed tones, always present but never in public. Many genocide survivors openly discuss the events of 1994, sprinkling in graphic stories of murder into the idle conversation after a few drinks after work. A friend described to the table one night how his younger brother had his throat slit with a machete as the others listened intently. Within 30 seconds, the uproarious laughter had returned and they were drunkenly calling a friend on a peacekeeping mission in Darfur. I was clearly the only one who thought the entire evening was surreal. It was as if I'd been dropped down the post-genocide rabbit hole.

It has not been easy to come to terms with some of my experiences here, the minority of which I've shared here, but they have all been deeply formative. I have only just barely begun to understand the genocide beyond its facts and figures. I am, now more than ever, aware of my life of privilege. If the point of this aptly named fellowship was to "Experience the World" then regardless of what I report back to academia, your money has been well spent.