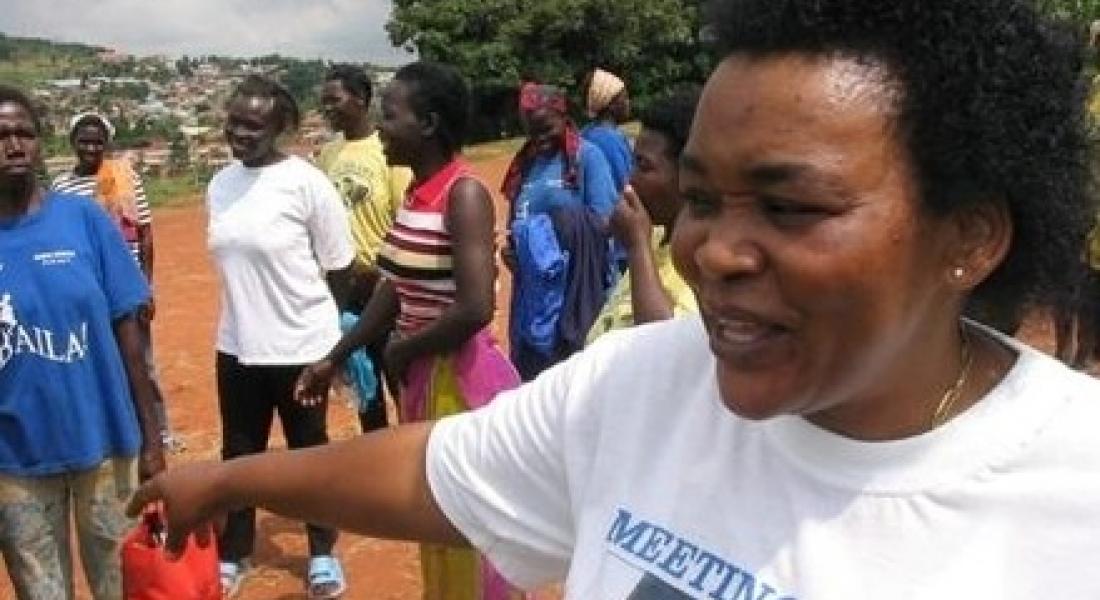 Several dozen undergraduates gathered earlier this week for a unique “conversation” with Rose Busingye, the founder of Meeting Point International in Kampala, Uganda. Busingye works with thousands of adults and children infected with and affected by HIV/AIDS. Emily Mediate ’15, who has been one of the organizers of the undergraduate Human Dignity and Human Development series, reports.

“The greatest need of a human being is the need of belonging.”

Rose Busingye sits quietly as she shares these words with the audience. We are all captured by her spirit—by the sincerity in both her words and composure. Listening in on the conversation with Rose is a precious opportunity to hear human dignity come to life.

For Rose, a Ugandan nurse who spent a few days recently with the Kellogg Institute community, meeting her patients’ physical needs alone is insufficient for holistic healing. Yet Rose does not offer a model for patient-centered treatment or advocate specifically for palliative care or propose a curriculum for multi-dimensional counseling.

Rather, her mission of care is centered on a singular idea: human beings have infinite value. How, I thought, can she live out this idea, which is so difficult to sustain in day-to-day life?

The answer is that it is a discovery and a journey. Rose operates under this framework and focuses every individual interaction towards this belief.

“Our joy is born out of an awareness that we are loved, and this dignity leads to an experience of joy that is a process of walking with one another.”

While the idea may seem simple, it is far from easy as a solution for patient care. The process of walking with each other and educating each other to understand one another’s value is difficult and takes time.

“I have been working at it since 1992,” Rose laughs. “As we journeyed, though, we all began to look at ourselves in another way, slowly by slowly.”

A journey of self-discovery and dignity

This is Rose’s life work.

She founded Meeting Point International in 2003 after ten years of home visits to patients. Now, the organization serves 5,000 men, women, and children, 2,300 of whom are sick. Meeting Point International also runs a welcoming house, the home of more than 50 abandoned children. Together, all of the members are dedicated to fulfilling the idea that if every person could realize their value and be looked at with value, things would change.

Rose talks more about how this self-realization of worth happens by describing the process as falling in love. Slowly, she says, she has seen herself and others begin to acknowledge their worth by continually discovering themselves and acting as though they valued themselves: cleaning themselves, taking necessary medications, and caring for others.

Much of this journeying at Meeting Point International occurs in small groups. Patients are divided into different groups according to which drugs they take and how often they take them.

The groups offer companionship for those with long-term illnesses such as tuberculosis or HIV/AIDS and give individual members the courage to persevere. Through the experiences of dancing, singing, and walking in nature, group activities offer a beauty that “bounces back” so that the members can understand their own worth.

Above all, everything at Meeting Point International happens organically.

Rose is the first to admit that the members are independent, often proposing activities that she doesn’t initially support. After Hurricane Katrina, for example, the women raised $2,000 to support those affected by the disaster in the US. Rose’s first response had been to pray for the victims, but the women urged Rose to do more.

“When you met us you didn’t just pray, you showed us love,” they said. “We want to show these people that they are loved and that the heart of a human being is international.”

The women later told Rose they wanted to build a school in their community. While Rose said if she were to build something, it would have been a hospital, she was moved by parents telling her they wanted their children to be educated to learn their worth, just as they had been educated through their membership in Meeting Point International. The Luigi Giussani School is now thriving.

At the end of our time with Rose, she stands up and smiles, communicating more gratitude than she could have in words.

If I had to articulate what human dignity looked like—in practice—I would point immediately to this conversation and to this woman.