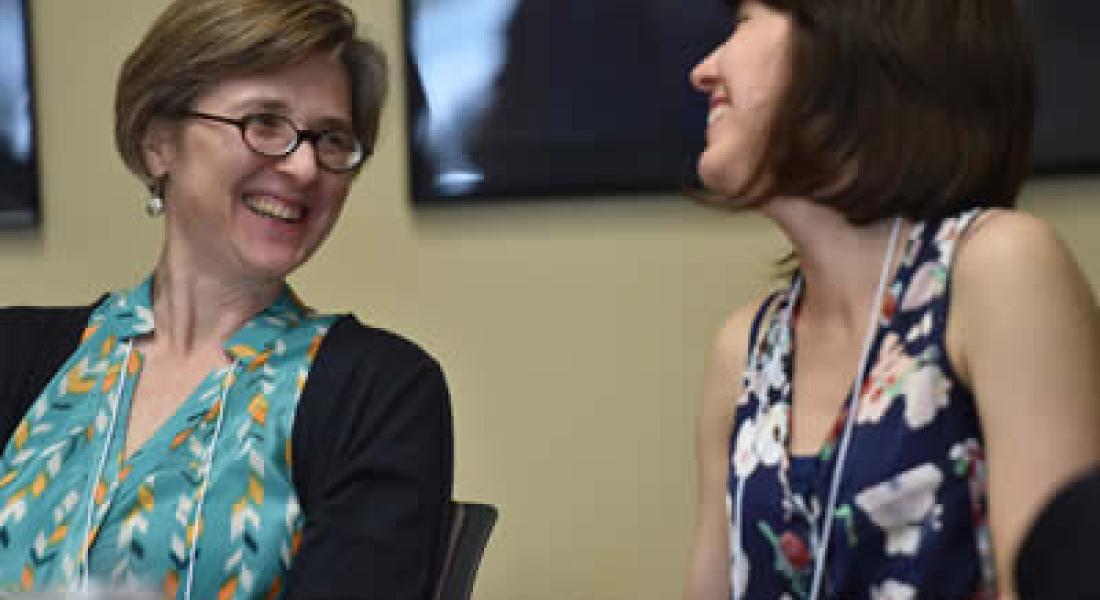 Kellogg Faculty Fellow Ann Mische (PhD, New School for Social Research), a scholar of social movements in Brazil and around the world, has an intense interest in how citizens in a democracy debate their futures and engage in collective efforts to bring about social and political change.

Mische arrived at Notre Dame in 2013 from Rutgers and holds appointments in both sociology and peace studies. In her work, she investigates processes and styles of communication and decision making across civil society networks and their implications for democracy, development, and social justice.

The laboratory for Mische’s research is Brazil.

“With its vibrant networks of religious, labor, professional, and partisan activism,” Mische says, “Brazil has been a particularly fertile place for grassroots organizing.”

Mische first visited Brazil in 1987, just out of college, on a fellowship from the Institute of Current World Affairs. It was an exciting and inspiring time. The Workers’ Party was in ascendancy, Lula’s popularity propelled him into his first run for the presidency, and, as she was taking his class on the Pedagogy of the Oppressed, Paulo Freire was named São Paulo’s secretary of education.

Assigned to write a monthly newsletter on Brazilian politics, Mische had the unique opportunity to immerse herself in popular movements with goals ranging from improving education in the urban periphery to halting deforestation in the Amazon. She not only reported on these movements but actively accompanied several: a Catholic youth pastoral group in a poor neighborhood on the outskirts of São Paulo, student organizations in under-resourced public high schools, and a program for children run by a local labor union.

Mische’s observations on Brazil’s emerging social movements during this time became the impetus for her decision to study sociology at the graduate level. At the New School, with Charles Tilly as her advisor, she focused her attention on youth politics and the intersection of civic and partisan networks in Brazil.

This research culminated in the award-winning Partisan Publics: Communication and Contention across Brazilian Youth Activist Networks (Princeton University Press, 2008), in which Mische examines the role of activist youths in Brazil's emerging democracy and the unique implications of their styles of political communication and leadership for democratic politics in Brazil and beyond.

Examining a wave of anti-partisan protests

First, in ongoing research with collaborator Angela Alonso at the University of São Paulo and the Centro Brasileiro de Análise e Planejamento (CEBRAP), Mische is exploring the origins, development, and implications of Brazil’s June 2013 anti-regime protests.

Beginning with a call for free transportation in São Paulo, the protests grew, in a matter of days, to encompass a myriad of causes—from an end to police violence to education reforms to lower taxes. By late June, in the midst of Brazil’s hosting of the FIFA Confederations Cup, millions of people had taken to the streets in over 100 cities in what Mische characterizes as a “cycle of mobilization” rather than a unified social movement.

“Não temos partido. Nós somos Brasil!” (“We don’t have a party. We are Brazil!”), a popular slogan, summed up the anti-partisan sentiments of many protestors.

There are many good reasons, Mische suggests, for Brazilians to be frustrated with their political parties. They include corruption, cronyism, and widespread incredulity over the price tag of many government projects and policies—including the expenses of hosting the 2013 Confederations Cup, the 2014 World Cup, and the 2016 Olympics.

Additionally, the success of some Workers’ Party initiatives in bringing people out of poverty has created an aspirational but precarious and dissatisfied new urban class.

“These Brazilians continue to feel the strain of an unstable infrastructure and ragged public services as well as general insecurity and mounting urban violence,” she says. “They want more effective administration of transportation, health care, and education.”

The June 2013 protests share a thread of anti-partisanship with other mobilizations around the globe, including among others Occupy Wall Street, the Indignados (15M) Movement in Spain, the Five Star Movement in Italy, and Istanbul’s Taksim Gezi Park demonstrations, Mische notes. Together, they raise broad questions about the limits of citizens’ anti-partisan sentiments and the relationship between social movements, political parties, and institutional politics generally.

While understanding the popular frustration with parties and partisanship, Mische is wary of the possible negative repercussions of the strong rejection of political parties for democratic governance.

“Political parties can—at their best—serve as bridging mechanisms by which social grievances and aspirations are carried into the structures of government,” she says.

“Improvements in social services, urban infrastructure, and state accountability—the cornerstone demand of the 2013 protests—depend on electing people to govern who are sympathetic with these demands and then those people establishing governments that function effectively. Anti-partisanship may work against implementation of the very reforms demanded by the protestors.”

Exploring the impact of activists’ constructions of the future

In a second project, Mische is examining how activists’ constructions of the future influence their actions and interactions in the political arena.

“The capacity to project into the future is an essential component of our agency as human beings,” she explains. “Do we feel that we can affect that future, or are we resigned to a fate determined by others? While our constructions of the future are in our imaginations, those constructions have a real impact on what we do and draw us forward in unique ways.”

In contrast to work done by cognitive psychologists, Mische’s focus is on how conceptions of the future affect the political process and social transformation.

As a pilot project, she is analyzing future-oriented discourse in the often-fierce debates over proposals for a “green economy” in the documents of the Rio de Janeiro United Nations Conference on Sustainable Development (Rio+20) and the accompanying “People’s Summit” in June 2012.

Her analysis of writings on “the future we want” occurs at the level of narrative and grammar in the texts of collective actors intervening in public debates about the future of the planet. She gives attention to whether they focus on the short, mid-, or long term, as well as whether they engage the future in a predictive or imperative mode.

“For example, what do the frequencies and clusterings of future-oriented verb-tense markers—will, must, could, should—tell us about power relations and political influence?” she asks. “Do marginalized or powerless groups use more imperative verb forms, as a means of challenging power? Is the predictive verb form a signal of relative privilege and insider status?”

Mische’s preliminary findings—which appeared in “Measuring Futures in Action: Projective Grammars in the Rio+20 Debates,” Theory and Society 43, 3–4 (2014)—are that modes of projectivity are useful in analyzing political decisions, relations, and institutions. She is currently working with a team of Notre Dame doctoral students to extend the analysis to a larger corpus of Rio+20 texts.

Her goal is to extend the analysis to a variety of sociological questions:  How do distinct modes or genres of projective discourse develop? How are various projective genres used in mobilizing citizens, forming coalitions, and building institutions? And what results do activists obtain from tapping into different modes of projectivity?

The resiliency of democracy in Brazil

“Recently, protest waves have taken a notable right-wing turn,” Mische notes, “with calls not only for President Dilma Rousseff’s impeachment, but also, among a small but vocal minority, for military intervention or a return to authoritarian rule. The recent economic downturn has given the government less maneuverability in responding to these social pressures and demands.

“Still, Brazil's democratic institutions, civil society networks, and social movements are feisty and resilient. I suspect that they will see the country through the current crisis as they have many times in the past decades.”