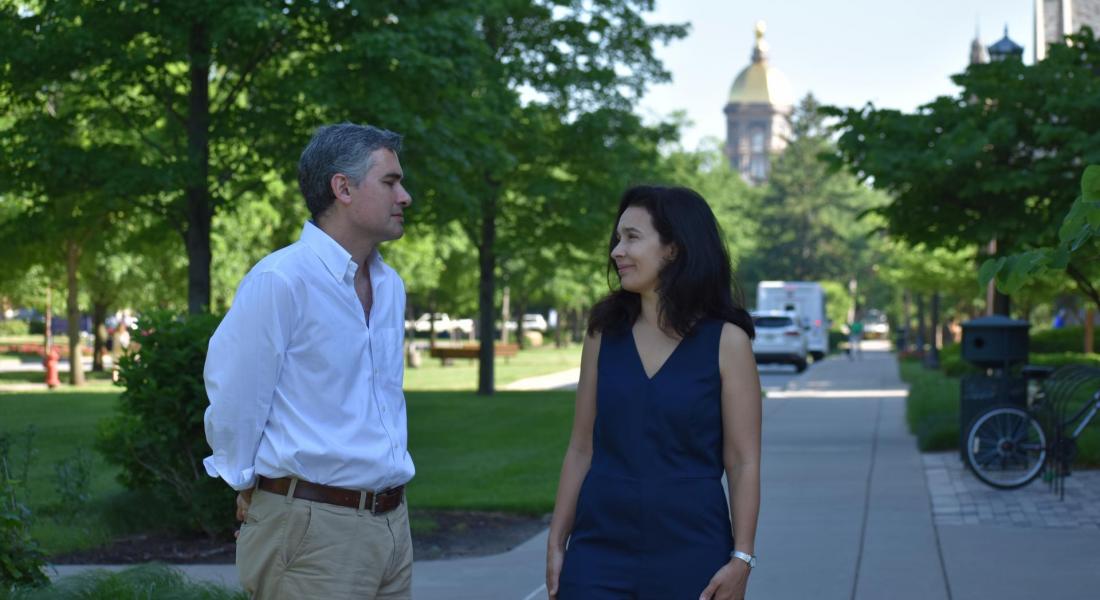 For families facing hunger in rural Mozambique, cellphones can be a lifeline.

That’s what Kellogg Visiting Fellows and Portuguese economists Catia Batista and Pedro Vicente found in their research on the use of mobile money, a service that acts as a sort of virtual wallet, allowing users to store and send cash on their cellphones.

The feature is popular in developing countries and replaces the need for bank accounts. And it’s particularly useful for urban migrant workers who may have cash to send back home to relatives facing a crisis, but no fast or reliable way to get it there.

In a three-year study on mobile money, they followed 2,000 households in 100 villages and determined that it acted as insurance against shocks – illness, deaths, and natural disasters like flooding – that left people unable to afford food.

The reason: family members in faraway cities could send them money almost instantaneously with the push of a few buttons on their cell phones.

“This is one instance we see the migrant remittances helping people overcome these hardship episodes,” Batista said.

Batista and Vicente, who are married, are both associate professors of economics at the Universidade Nova de Lisboa and cofounders of the NOVAFRICA research center in Lisbon. While some of their research intersects, both are respected scholars in their own right.

They’ve spent the past academic year at the Kellogg Institute, working on a mix of joint and separate NOVAFRICA research projects that focus on development in sub-Saharan Africa, particularly in Portuguese-speaking countries that have often been overlooked by researchers and aid groups.

Their aim: to provide reliable information for policymakers and donors about development strategies that work.

“We’re trying to give them solid evidence on which to justify spending money so they can try to bring these benefits to hopefully millions of people, not just the thousands we work with” in field experiments, Batista explained.

One of Vicente’s key projects at Kellogg has been studying how to counteract the “resource curse” in Mozambique, a young democracy where a major gas deposit was discovered in recent years.

The curse predicts that countries with natural resources develop slowly – possibly, according to Vicente, because of corruption, low political accountability among leaders, and weak institutions.

But in Mozambique, which has few independent media sources, getting information about the management of natural resources to the public could alter that pattern.

He noted that being at Kellogg has given the couple the opportunity to receive feedback on their work from scholars across a spectrum of disciplines – something that’s relatively rare for economists.

He’s also studying the impact a new IT platform, consisting of tablets connected by a server, is having on classroom interaction in 42 Catholic primary schools in Angola.

“The typical way of giving classes in this setting is the teacher talking, and that’s it,” he said. “We believe there can be different dynamics in the classroom with the tablets, getting students to talk more and creating more interaction between them.”

Meanwhile, Batista’s research focuses on international migration, including illegal migration from West Africa to Europe, which often involves a treacherous trip across the Mediterranean Sea.

“The sea, in this context, is not really the worst part of the journey,” she said.

More migrants die while crossing the desert to Libya than on the ocean leg of the journey, while others are enslaved by smugglers before they ever attempt the sea crossing.

Much of her work focuses the decision-making process for migrants. In one experiment, she worked with potential migrants to see if they had accurate information on the risks they would face in transit.

“It means they really think it is worthwhile to do this,” she said.

But many had unrealistically high expectations about getting asylum or being able to work legally in Europe. She’s now planning a field experiment in which subjects are provided with better information about the dangerous route to Europe and less risky alternatives for regional migration.

That project, like much of the couple’s work, could have real-world implications for many in Africa.

“This is the motivation that has kept us going for these many years,” Batista shared. “It’s not just the paper that hopefully we’ll get published in the end.”