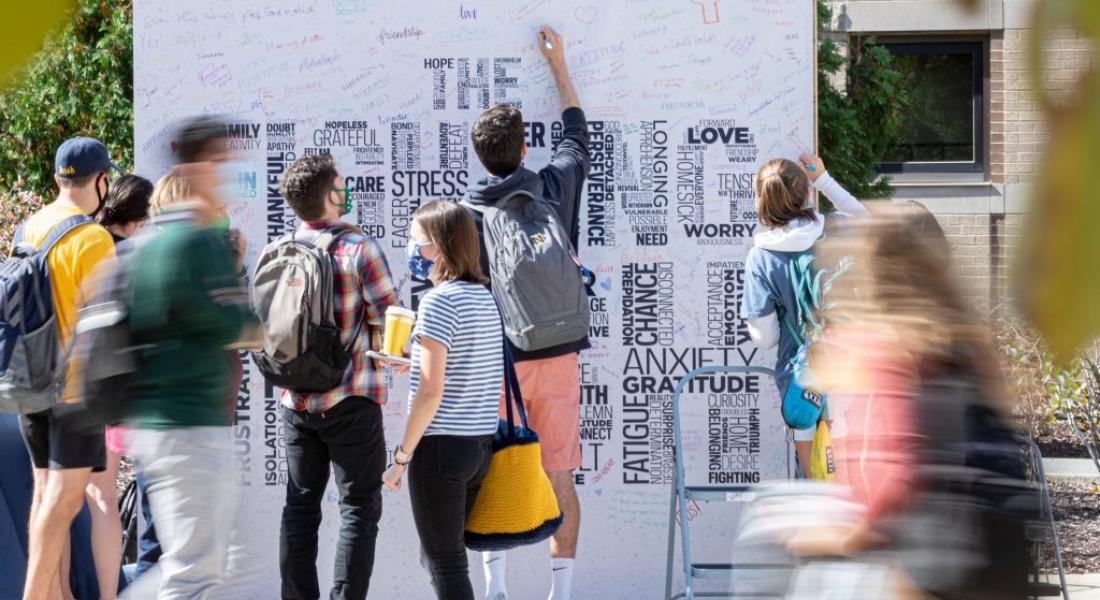 In my years conducting fieldwork on and with families in north India, interlocutors often ask me if parents in the United States really kick their children out of the house when they turn eighteen. Such questions often occur alongside other shocked questions, like whether parents really leave their babies all alone overnight in a room by themselves, and whether it’s true that we refuse to care for our aging parents, warehousing them in institutions instead. In addressing all three of these questions, I often find myself trying to explain a foundational belief in Euro-American life: maturing into adulthood requires gaining emotional and financial independence from our families, and we mark such growing independence through space—different rooms, different houses, time spent away from home at college.

Yet there is a seeming paradox reflected in American sensibilities. On the one hand, aging adults often fight to remain at home. As they grow old, people invest enormous resources in being cared for at home, rather than in institutions. On the other hand, as they leave adolescence and approach adulthood young Americans invest enormous resources in being cared for in institutions rather than at home. In both cases, however, the goal is the ongoing performance of independent personhood—reflecting the sense that fully adult persons do not and should not depend on others. Living independently from family is a powerful symbol of maturing and aging with dignity, a key element of recognizable adulthood for many communities in the United States.

I began thinking about these conversations from a new perspective as a heated debate unfolded about whether to bring students back to college campuses for residential learning this fall. This debate has focused on difficult questions about the economics of higher education, the epidemiology of COVID-19, the behavior of students, and the value of face-to-face learning. But another issue is rarely openly discussed: the pandemic threatens pathways to socially recognized adulthood, particularly in the segments of American society that send their children to four-year residential universities. Such residential universities only educate a small proportion of college students in the United States, but they are frequently depicted in the media as the paradigmatic college experience.

The pandemic, in other words, threatens our cultural script for developmentally appropriate personhood. Human development, of course, is a feature not only of societies but of individuals as well, unfolding across what social scientists refer to as the “life course,” a socially and historically variable model of stages of development from infancy into old age. Cultural anthropologists have long observed that Euro-American models of the life course are far from universal—indeed, such models are not even universal within the United States. Seemingly obvious ideas about, for example, when a child is old enough to responsibly care for other children, or what makes a person “elderly,” vary enormously across cultures.

Unlike folk models of human development in the US, which frame development primarily as the unspooling of natural psychological processes within the individual, many societies around the world see full adult personhood as a relational achievement, a product of growing and changing relationships with others. In such contexts, independence is often seen as a failure to cultivate the relations necessary to achieve full personhood. For the people I know well in India, children often live with their parents until marriage, and sons may live with their parents and adult brothers for their entire lives; even when kin live separately, their lives are often financially intertwined.

What is adulthood?
Competent adulthood in Jaipur, as in many other places around the world, is marked by the ability to sustain complex interdependent relations with others, not the ability to stand separately from those relationships. In my research on understandings of household conflict and violence in north India, women who faced family conflict rarely desired to live independently. Rather than seeing such spatial independence as a mark of freedom, many saw it as a profound loss of the interdependent relations that made them capable adults. As a result, they sought support that helped them transform, rather than exit, those relations. For similar reasons, people pitied my geographically dispersed family. When I told one friend that my brother- and sister-in-law lived halfway across the country because they were doctors at a prestigious medical institute, he shook his head sadly and asked, “How will you grow to love each other?”

Such comparisons help us understand dynamics of intergenerational support, social transformation, and even political economy in other societies. But they also throw into relief the rigid, and, from a global perspective, unusual, emphasis placed on material and spatial independence as a mark of successfully achieving adulthood in the United States. Such comparisons, in turn, can help us better understand the panic that accompanied adapting college life to the pandemic, as the performances of independence required to sustain this model of adulthood were acutely threatened by the demands of social distancing and a shrinking economy.

College and independence
For upper middle-class families, residential college is a powerful proving ground for adult independence. At the same time, everyone involved recognizes that the independence of residential college comes with training wheels. In spite of their spatial independence, students are frequently still dependent on their parents financially, for money, for housing, and for administrative support like filing taxes and accessing health care. The assumption of such on-going dependence was dramatically demonstrated when students went “home” last spring, revealing profound inequalities in the support students could actually access. Throughout their four years at college, students are in fact embedded in complex interdependent relationships with their families, residential life staff, fellow students, and the university.

Enrolling at college does not transform eighteen-year-olds from “dependent” to “independent.” The difference is how independence is performed. That performance depends profoundly on spatial independence, a life lived with peers rather than family. College serves, in short, as a liminal time in which upper middle-class adolescents are able to safely experiment with independent adulthood. The enormous sacrifices many families make to provide their children with this experience underscores the fact that many see such a period as crucial to achieving adulthood. Interviewing middle-class American families about their attitudes toward college and debt, anthropologist Caitlin Zaloom found that families saw the costs of college as a “moral obligation” that good parents fulfill, even though college acceptance and graduation is then reframed as the individual achievement of the student.

From this perspective, the enormous investment of students, institutions, and families in getting kids to college, no matter the cost, makes sense. The path to adulthood literally weaves through cramped dorm rooms and bathrooms shared with peers rather than parents. Such performative independence is central to practicing the skills that make successful adults by current social and economic standards. Indeed, scrappy individualism seems necessary, more than ever, to navigate an economy where more and more jobs are contingent, freelance gigs.

Not everyone is equally able to fully meet the demands of this model of independence. Because we persist in seeing full adult personhood as an individual achievement, when people fail to meet its stringent terms they often experience their challenges as individual failures. Indeed, policies and practices that regulate the relationship between spatial independence and personhood across the life course in the United States often obscure the complex interdependent relationships that sustain such seemingly independent lives. Anthropologist Elana Buch has demonstrated that the “independence” of aging at home is made possible through the labor of home health aides, nearly always women of color, whose moral commitment to upholding independent personhood for their clients requires them to work under precarious and poorly paid conditions. Yet the interdependent relations between health aides and the aging people for whom they care are erased by employer policies and by ideologies about independent personhood.

In similar ways, the interdependent relations of undergraduates at elite residential campuses are obscured. Yet such spatial independence is sustained by the labor of others—those who cook, clean, and otherwise care, whose labor is often absent in debates about the value of face to face education, just as the labor of home health aides is erased by the independent living their efforts produce. At the end of the day, adulthood is as relational in the United States as it is in Jaipur. The difference is the emphasis our society places on erasing those relations.

Independence and human dignity
A life-course approach to how the pandemic is changing college life allows us to appreciate why families and students are deeply invested in continuing a “normal” college experience. Such an approach also allows us to reflect on the fault lines in American desires for independent, autonomous personhood by bringing into view the multiple modalities of risk at stake in producing independent persons. Whether or not we agree with the specific decisions that institutions made to support students this fall, we can still reflect on the larger set of values that our model of the life course reflects. How might we better recognize and honor the relations that sustain our seeming independence? Following the provocations of integral human development, can we imagine new ways to imagine independence and cultivate adulthood that fully honor the dignity and humanity of those whose labor sustains us?

Scholars from a range of backgrounds address these questions, demonstrating that such questions quickly take us from “how best can we support young adults during the pandemic” to existential dilemmas about what it means to be a human who depends on humans and non-humans alike. In a pre-pandemic interview with the New Yorker, Judith Butler offered one guide to this process. After describing individualist models of personhood as “lethal,” she suggested:

Acknowledging dependency as a condition of who any of us happens to be is difficult enough. But the larger task is to affirm social and ecological interdependence, which is regularly misrecognized as well. If we were to rethink ourselves as social creatures who are fundamentally dependent upon one another—and there’s no shame, no humiliation, no “feminization” in that—I think that we would treat each other differently, because our very conception of self would not be defined by individual self-interest.

The COVID-19 pandemic challenges our very models of what it means to become an adult person in the United States. Anthropological research that compares models of the life course across diverse societies can help us confront how our own models of personhood might create challenges in addressing the pandemic—and offer new ways to recognize the difficult work we all do to become adults, fully human, in relation with others.

Dignity is a relational achievement. As the pandemic reshapes American life in ways large and small, it underscores the extent to which our model of individual personhood fails to account for such relationality and narrows our ability to imagine more sustaining futures.

Kellogg Faculty Fellow Julia Kowalski is assistant professor of global affairs and a concurrent faculty member in Notre Dame’s Gender Studies Program. A cultural anthropologist by training, she completed her PhD in the Department of Comparative Human Development at the University of Chicago. She has been conducting fieldwork in North India since 2007, focusing on issues of gender, kinship, women’s rights, personhood, gendered violence, and everyday institutional practices.