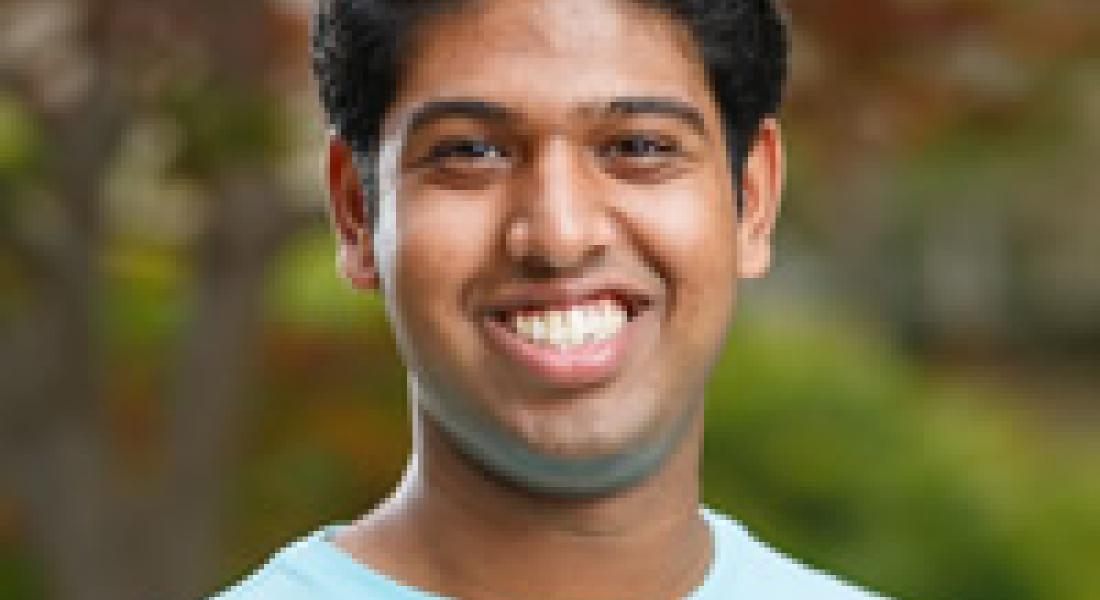 Throughout the Kellogg community, faculty and students are engaged in understanding the causes of poverty around the world—and proposing and analyzing solutions.

International Scholar Sreeraahul Kancherla ’17 exemplifies this engagement. Recently announced as a winner of the elite National Science Foundation (NSF) Graduate Research Fellowship, Kancherla is an honors economics and honors mathematics double major who is deeply invested in working towards economic solutions to poverty.

As part of the Kellogg International Scholars Program (ISP), he is the student leader—the “Big Dog”—on the research team of Faculty Fellow Jeffrey Bergstrand, who categorizes and studies free trade agreements and their effects through his NSF-Kellogg Institute Data Base on Economic Integration Agreements. Simultaneously, in Notre Dame’s Wilson-Sheehan Lab for Economic Opportunities (LEO), Kancherla has immersed himself in projects dealing with healthcare, early childhood education, community college persistence, the health impacts of affordable senior housing, and job mentoring.

“My passion is the role of public policy in devising strategies to alleviate poverty,” Kancherla says.

“My research at both Kellogg and LEO are important to me because they reflect different approaches to achieving economic gains for underprivileged populations. The Economic Integration Agreements dataset is used to help identify the tremendous macroeconomic growth benefits to trade liberalization—one of the most effective long-term economic development strategies available. And my work with LEO has displayed the tremendous potential and efficacy of targeted microeconomic solutions to poverty issues—another approach to the problem and one that is also incredibly important.”

“A passion for research”

“I grew up talking about issues of economic and human development,” says Kancherla. “As the child of parents who emigrated to the United States from India, the disparity in the allocation of goods and services throughout the world was at the forefront of many family discussions.”

Kancherla gravitated to Kellogg soon after his arrival on campus. Selected for the Kellogg ISP, he was partnered with Bergstrand and his research group, which has the exacting task of expanding, refining, and updating the Economic Integration Agreements database—one that lists and categorizes all economic integration agreements since 1950 across nearly all country pairs. Widely recognized as the world’s foremost compilation of levels of trade integration and liberalization, the database is relied upon by economists at the World Bank and throughout academia.

Kancherla’s principal responsibility in the data set is Europe—particularly recent expansions of the European Union in 1995, 2004, and 2007. During summer 2015, he stayed on campus and worked full time for Bergstrand. During those months, Bergstrand says, Kancherla discovered and corrected significant errors in the dataset and introduced sophisticated tools to the analysis. These contributions were important preparation for a critical “close-out” of the data that September.

Kancherla participated in the work of the research group even during his junior year, when he studied mathematics at the University of Oxford’s Oriel College—and earned “firsts” across all 13 of his courses.

“I’m pretty emotionally invested in the database,” he says. “We students consider it our data set, too!”

With Kancherla’s skills, dedication, and enthusiasm, in March 2016 Bergstrand named him the research group’s senior leader, with the task of organizing, leading, and mentoring the group’s other student members.

“Sree has a passion for research and a very good eye for it,” says Bergstrand. “He’s highly motivated and entrepreneurial in his desire and ability to figure out analytical problems, has strong economic insights, and approaches issues logically. He's also very good at motivating during the table discussions of the team of research assistants. I often look to him to run the weekly meetings. I've had some great Big Dogs, and Sree is certainly one of the best.”

As Kancherla completed his senior thesis on the varying effects of unemployment insurance this spring break, he and his faculty mentors were thrilled to learn that he had been awarded a highly competitive three-year fellowship through the National Science Foundation’s Graduate Research Fellowship Program (GRFP). Kancherla is one of only 29 winners nationwide in economics, with other awardees in science, technology, engineering, mathematics, and the social sciences.

He will take the fellowship and its stipend to the University of California, Berkeley—just one of the top-tier doctoral programs in economics to which he was accepted. While the award will provide a $34,000 annual stipend for three years within a five-year fellowship period, just as significant is the recognition the GRFP provides. Past GRFP awardees include such Nobel Prize winners as physicist and former US Secretary of Energy Steven Chu, economist and former Federal Reserve Chairman Ben Bernanke, and Google founder Sergey Brin.

Kellogg International Scholars Program the “jumpstart” to an array of opportunities

In the weeks before graduation, Kancherla was able to reflect on his time at Notre Dame—and credits the Kellogg International Scholars Program as the key to his many undergraduate opportunities, experiences, and achievements.

“The Kellogg ISP has been the jumpstart of my entire time at Notre Dame,” he says. “I can honestly say that I wouldn’t be where I am without it. The Kellogg ISP has extended my understanding of development and my ever-expanding worldview. I truly believe that I was chosen for a year at Oxford and a research position at LEO largely because I had a proven record in research with Professor Bergstrand. The ISP research has certainly been a differentiator.”

As one might expect from a student research leader, Kancherla also prizes the way that he has been a part of an outstanding and collegial International Scholars cohort—one in which students learn from each other.

“Even beyond some very welcome external recognition, ISP has given me the gift of engagement with fellow scholars and access to a multitude of research presentations, speakers, panels, and dinners,” he says. “I have learned so much from my fellow International Scholars and their strategies and experiments. As I continue my focus on poverty and public policy, I’m eager to take it all forward with me to graduate school and my career in economics.”