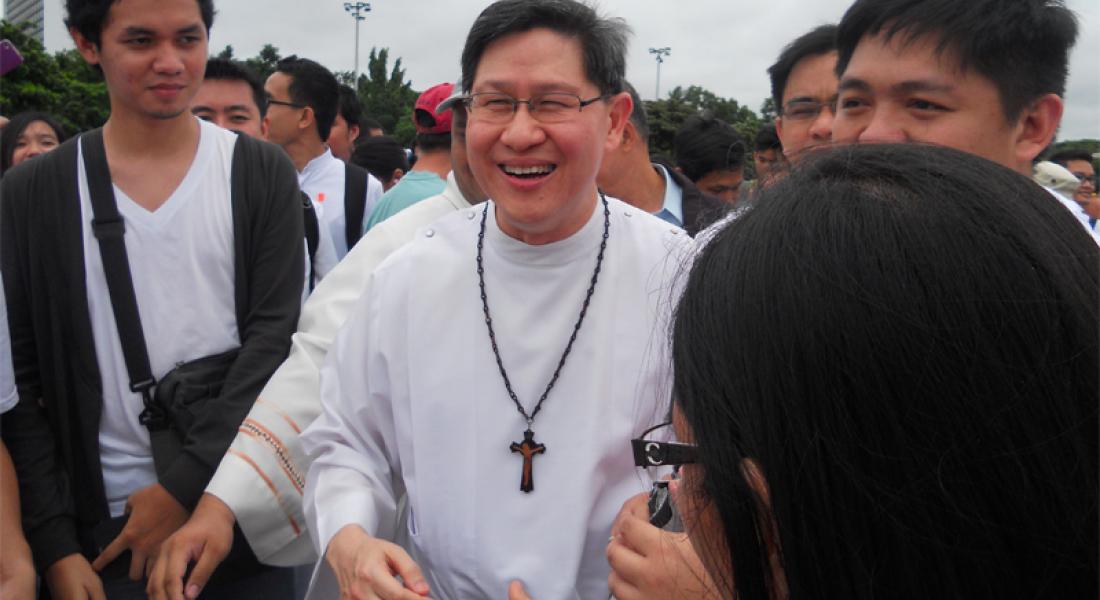 Cardinal Luis Antonio Gokim Tagle, a dynamic, persistent, and humble advocate for the poor and marginalized in his native Philippines and around the world, will receive the Ford Family Notre Dame Award for International Development and Solidarity at a campus ceremony at 8 p.m. on Friday, March 24 in the McKenna Hall Auditorium.

Following the award presentation, the Cardinal will deliver an address on integral human development. Both the ceremony and the lecture are free and open to the public.

The 32nd Archbishop of Manila, Cardinal Tagle serves as the president of Caritas International, a confederation of more than 160 Catholic relief organizations that work to end poverty, promote justice, and restore the dignity of the most vulnerable, regardless of race or religion.

“Cardinal Tagle is cut of the same cloth as Pope Francis, who named him president of Caritas,” says Rev. Robert Dowd, CSC, director of the Ford Family Program in Human Development Studies and Solidarity, which presents the award.

“He has been a tireless champion of the poor, as much by example as by word. He opens his home to the homeless and eats with them in his house. He spends time listening to the most marginalized, working to ensure that their experiences and concerns inform his ministry and the Church's efforts to promote justice and peace.”

Known for his friendly demeanor and approachable nature, the Cardinal prefers to be called by his nickname, “Chito,” instead of his full title. Media savvy, he has a large social media following, particularly on Facebook, allowing him to spread his message of hope and forgiveness to people across the globe.

Tagle has spoken out strongly about issues impacting the poor and vulnerable in the Philippines and around the world. He has stood firmly against the death penalty and political corruption and worked vigorously toward a Catholic response to issues such as the international refugee crisis and climate change.

While at Notre Dame, the Cardinal is participating in the 2017 Catholic Social Tradition Conference, “Soul of Development,” which celebrates the 50th anniversary of Pope Paul VI’s Populorum Progressio. The basis for many Church policies on integral human development, it will be the focus of Cardinal Tagle’s address: “Living Out the Legacy of Populorum Progressio Today and Tomorrow.”

Cardinal Tagle will also open the annual Romero Days commemoration, a project of Latin American North American Church Concerns (LANACC), by celebrating Mass in the Basilica of the Sacred Heart at 5:15 pm on Friday, March 24, 37 years to the day after Archbishop Óscar Romero was assassinated in El Salvador.

Past recipients of the award include Amina Mohammed, now the Deputy Secretary-General of the United Nations; L’Arche; social entrepreneur Jacqueline Novogratz, CEO and Founder of Acumen; development economist and Nobel laureate Amartya Sen; Partners In Health, whose cofounders Paul Farmer and Ophelia Dahl accepted the award on its behalf; and Patti and Ray Chambers, the United Nations Secretary General’s Special Envoy for Malaria.

The Ford Family Program in Human Development Studies and Solidarity is a program of the Kellogg Institute for International Studies. Part of the University of Notre Dame’s new Keough School of Global Affairs, the Kellogg Institute is an interdisciplinary community of scholars and students from across the University and around the world that promotes research, provides educational opportunities, and builds linkages related to democracy and human development, two topics critical to our world.