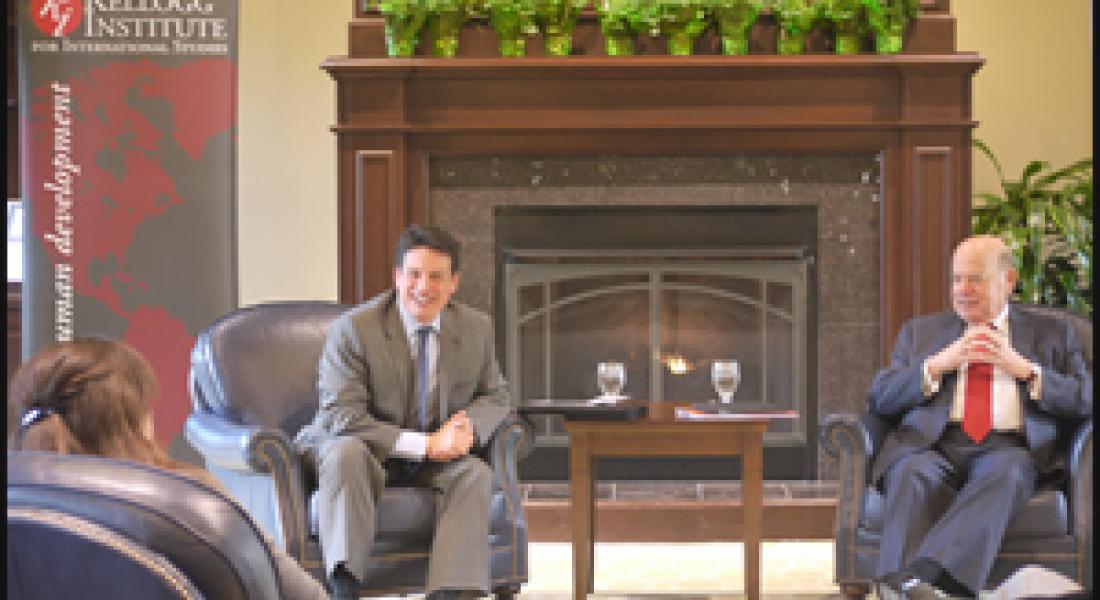 This afternoon, the Kellogg Institute for International Studies welcomed José Miguel Insulza, outgoing secretary general of the Organization of American States (OAS), to an open discussion at the University of Notre Dame. The informal conversation, “The Past and Future of Inter-American Relations: Reflections from a Decade of Leadership of the OAS,” was facilitated by Paolo Carozza, Kellogg Institute director.

“This was a great opportunity to hear a unique voice on issues of importance to the Kellogg Institute,” said Carozza, who served as a commissioner and president of the Inter-American Commission on Human Rights during Insulza’s tenure. “Objectively, very few people have the extraordinary depth of political experience Insulza has had. He has been a close witness to every major event surrounding democratization or development in Latin America since the founding of the Kellogg Institute [in 1982].”

Asked about the successes and highlights of his secretariat, which comes to a close next month, Insulza reflected on the some of the major events that punctuated his tenure, noting the challenges faced and strides gained in each. Among others, he spoke with particular pride and detail about the steps the OAS implemented to reintegrate Cuba into the organization after its 39-year suspension. Much of the dialog with the audience during a Q&A period focused on the current crisis in Venezuela.

Looking ahead to the future of the OAS, Insulza said that many challenges ahead lie in the diversity that exists among OAS members and the multitude of interests vying for attention. He advised that the OAS would do well to avoid potential pitfalls of focusing on issues of development to the exclusion of others. Citing the primary role of the OAS in the promotion of democracy, he expressed hope that a focus on political issues would take center stage, particularly those surrounding democracy, human rights, trade, crime, and immigration.