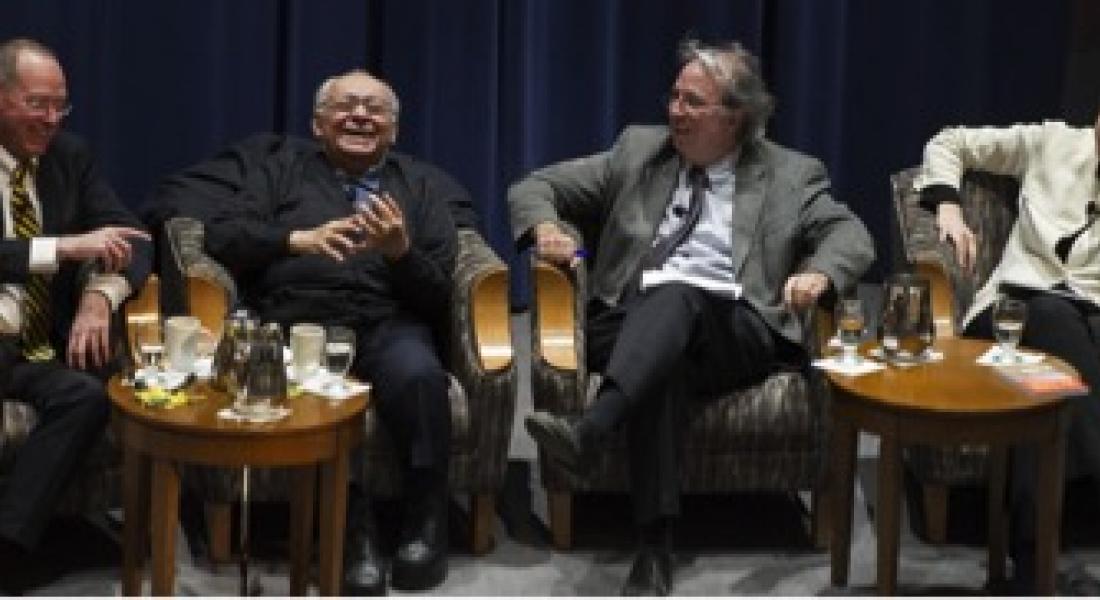 In the Company of the Poor (Orbis Press, 2013) explores the two men’s common option for the poor through a selection of their writings. Edited by Michael Griffin and Jennie Weiss Block, the book used as a springboard public and private conversations hosted by the Kellogg Institute.

“I’m excited about this book because it was an opportunity to write with an intellectual hero who became a friend,” said Farmer. One chapter recounts the beginning of that friendship in a joint trip to the slums of Peru, but even earlier, as a very young man, Farmer had read Gutiérrez’s work.

“The very architecture and fiber of our earnest and ambitious efforts” to work with the poor in Haiti—efforts that would develop into the global health nonprofit Partners In Health (PIH)—were based on principles drawn from liberation theology, Farmer said.

The message is simple but critically important, Gutiérrez said in his remarks. “We need to take time to communicate and walk with the people.”

Kellogg Institute Executive Director Steve Reifenberg quoted Archbishop Desmond Tutu’s advance praise for the work: “ ‘The book is erudite, fresh, and even, at turns, witty; it draws in a lovely way on a deep friendship between physician and theologian.’”

According to Reifenberg, who wrote the volume’s afterword, “what is wonderful about this book is that the authors look squarely in the face of institutional evil—and in both cases chart a course forward.”

The Kellogg book launch drew hundreds of members of the Notre Dame community while hundreds more people, including students at dozens of colleges and universities across the country, watched via live stream.

"I felt pure inspiration in hearing Dr. Farmer and Fr. Gutiérrez speak about their book.  Their model of accompaniment and the preferential option for the poor should be incorporated into all of our lives,” said Eck Institute of Global Health MS student Christiane Cardoza ’10.  “What I took away from the talk is that we are not meant to help the poor, but rather, walk alongside them on a path towards development.”

A fortuitous encounter on the Notre Dame campus was the genesis for In the Company of the Poor.

When Dr. Paul Farmer accepted the Notre Award for International Development and Solidarity on behalf of Partners In Health in spring 2011, he had the opportunity to reconnect with his long-time hero. In the fall, Farmer returned for a public dialogue with Gutiérrez arranged by the Kellogg Institute, “Re-imagining Accompaniment: Global Health and Liberation Theology.” That discussion, which continued in the days that followed, forms the core of the new work.

The book launch is not the end of Farmer and Gutiérrez’s collaboration. While Farmer was on campus, both took part in a Kellogg workshop for scholars and practitioners of international development to discuss Farmer’s concept of “accompaniment” as the guiding principle for engagement with the poor around the world.  A future book, tentatively titled “From Aid to Accompaniment,” is planned.