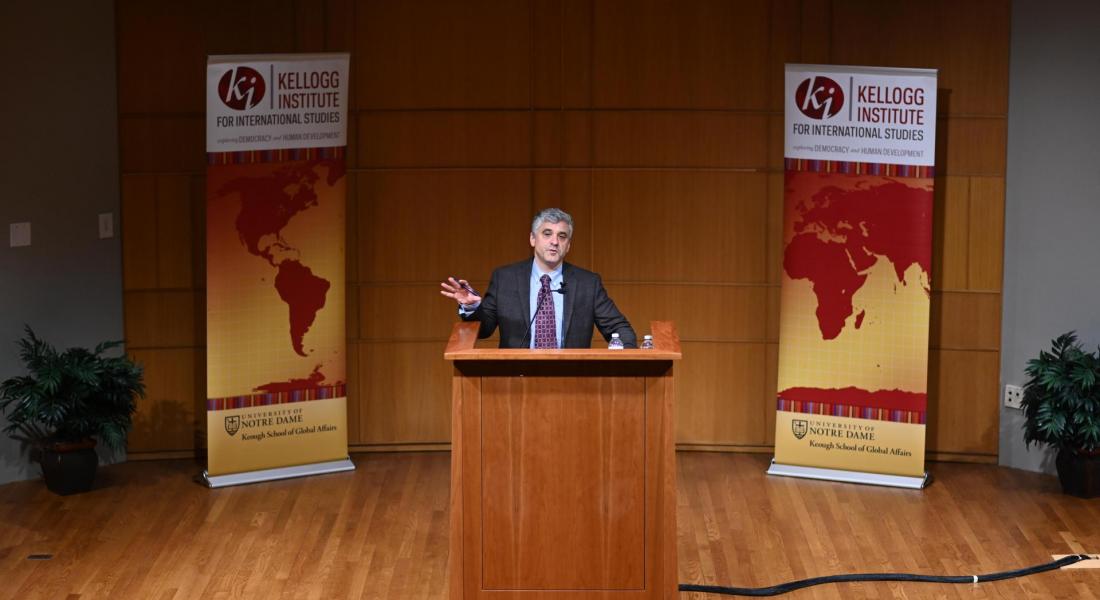 A Harvard professor cautioned Democrats last week against expanding the number of seats on the United States Supreme Court – a strategy some presidential candidates have floated as a way to counteract the perceived politicization of the court by Republicans.

“Strong institutions...are really freaking hard to build,” said Steven Levitsky, co-author of the 2018 New York Times bestseller How Democracies Die and a former visiting fellow at the Kellogg Institute for International Studies. “Don’t (mess) with that.”

Levitsky spoke March 21 at Kellogg on the state of American democracy under President Donald Trump.

His assessment: The nation’s courts and other institutions are holding strong against Trump’s authoritarian tendencies, and civil society is providing plenty of pushback. But the underlying problems of political polarization and norm erosion that led to his election in 2016 haven’t gone away.

“Donald Trump is a symptom of that polarization,” said Levitsky, a professor of government at Harvard. “He didn’t cause it and his departure from the presidency will not end it.”

Meanwhile, bipartisan hatred within the US is at its highest level since Reconstruction, effectively preventing the two major parties from working together.

In How Democracies Die, Levitsky and co-author Daniel Ziblatt argue that democracies fail not because of revolutions or military coups, but due to the slow weakening of critical institutions like the court system and the gradual erosion of political norms.

Levitsky told the standing room-only crowd at the Hesburgh Center Auditorium that there is “at least some room for concern” that same process is happening under Trump. He repeatedly described the president as a “demagogue.”

While the US Constitution has effectively checked ambitious and powerful presidents in the past, he explained, “constitutions by themselves are never enough to protect democracy. Even the best-designed constitution on Earth does not function automatically.”

Instead, mutual toleration – being able to disagree with political rivals without treating them as enemies – has helped lawmakers from opposing sides work together.

So has the practice of institutional forbearance, under which a president refrains from exploiting rarely-used levers of power for partisan gain – the pardon, for example, or by circumventing Congress to make policies through executive order or the declaration of a national emergency.

“Politicians can exploit the letter of the Constitution in ways that eviscerate its spirit,” he said.

Levitsky said the US is undergoing a transition that no democracy has previously undergone, where members of the dominant majority – in this case, white Christians – lose their dominant status.

While he’s confident the US will make the transition successfully, for now it is in the “middle of an immense political earthquake” characterized by intense polarization.

He traced the conditions that led to Trump’s rise, including a move away from letting party officials select presidential candidates in “smoke-filled backrooms” at national conventions. That convention system ended in 1972 and wasn’t very transparent or democratic, but it allowed officials to weed out unfit candidates – including authoritarians.

“Had the old convention system been in place in 2016, Donald Trump wouldn’t have gotten anywhere near the White House,” he said.

Because the US is becoming more racially and culturally diverse, Levitsky said the Republican Party will be forced to become more inclusive if it wants to survive. But for now, Republicans are engaging in what he described as “constitutional hardball,” or using their power in ways that test the limits of legality.

The most stunning act of constitutional hardball came when Republicans refused to hold confirmation hearings in 2016 for Merrick Garland, then-President Barack Obama’s nominee for a vacant Supreme Court seat.

“Merrick Garland is about to become the rule rather than the exception,” he said.

If a Democrat is elected president in 2020, he or she will likely face unfavorable rulings from the majority-conservative Supreme Court. A number of progressive candidates, including South Bend Mayor Pete Buttigieg, have voiced support for adding more justices to the court as a way to eliminate partisanship.

But court packing, Levitsky argued, would lead to long-term damage to democracy. Instead, Democrats should refrain from playing constitutional hardball themselves, even if it means they get less accomplished while in power.

“Once the process of escalating constitutional hardball begins, it becomes very difficult to reverse,” he explained. 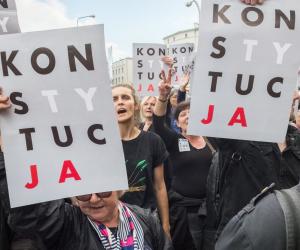 How independent international courts can challenge the dismantling of democracy