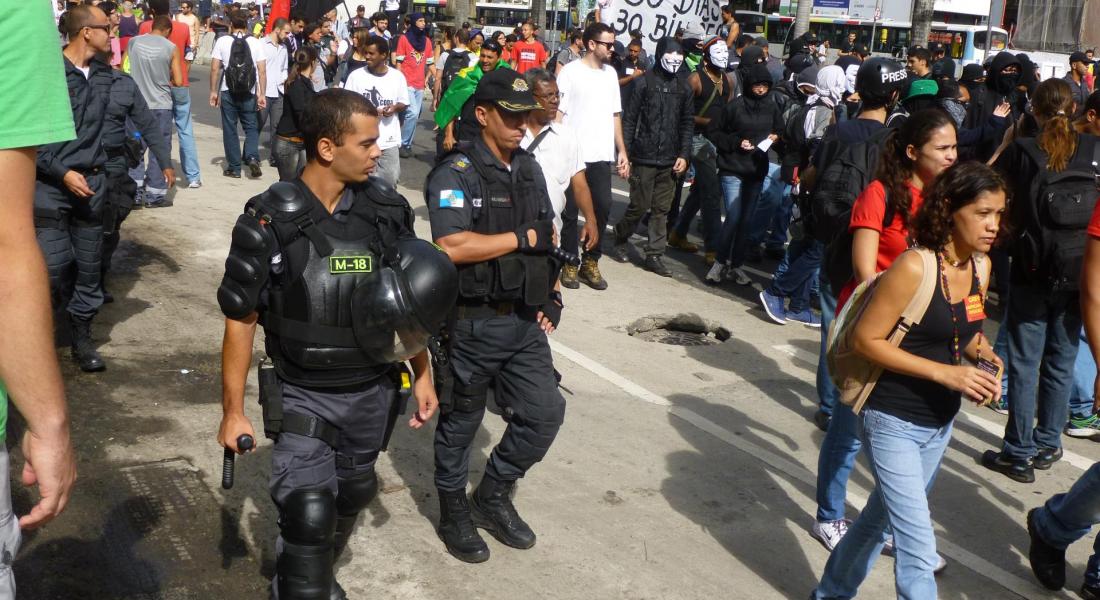 “Rio’s favela pacification program represents an attempt by the state to regain control of slums controlled by armed drug traffickers affiliated with organized criminal factions,” she explains. She is studying whether the mediation of local community leaders or organizations can facilitate the transition to state control. Tensions are heightened in the lead up to Brazil’s hosting of the World Cup, which begins June 12.

Living in Babilônia, one of two neighboring favelas where she is conducting ethnographic research, Israel found herself last week in the middle of the community’s encounter with the local UPP (Unidade de Polícia Pacificadora or Pacifying Police Unit).

Everything seemed normal and calm early Saturday morning (May 31) in the pacified favelas of Chapéu Mangueira and Babilônia, which overlook the beach in Leme at the end of Copacabana. Shortly after I got home from breakfast at the bakery in Chapéu Mangueira, a friend there messaged me on Facebook to let me know that a resident, Felipe da Silva, had just been shot by a UPP Pacifying Police officer. As we talked, the loud speaker blared from the Residents’ Association in Chapéu Mangueira, announcing a protest.

When I approached where residents were gathering at the top of the hill in between Chapéu and Babilônia, I noticed the “reinforced policing” – dozens of police cars and police with large guns lining the street. Roughly 80 residents of all ages, including children, stood around until a community leader called everyone to begin the march down the hill.

Residents set off down the steep hill out of the favelas and continued through the streets of Leme, chanting slogans to the beat of drums and instruments played by children.

They flashed their signs to residents of Leme’s high-rise apartments and motioned for others to join them. Most onlookers just filmed on their smartphones from their windows.

Then the march reached Av. Princesa Isabel, one of few roads connecting traffic between downtown and the wealthy, tourist-friendly South Zone. Participants took to the street to block traffic. Police told demonstrators that they did not have the right to block traffic since they had not received the necessary clearance in advance. A man cried out, “Don’t let the police tell you what to do! The protest is ours!”

Demonstrators formed a large circle and sat as instructed by a community leader. They continued with chants and the popular song “Rap da Felicidade,” which voices the discrimination and violence favela residents face—and the pride they feel in being a part of their community.

Residents proceeded to march around Princesa Isabel, blocking traffic, flashing their signs to the stopped cars and the media. Police formed lines to slowly move in on the edges of the crowd, pushing to clear way for traffic. The climate was tense.

As demonstrators circled back on the other side of Princesa Isabel, police released large amounts of pepper spray on one end of the crowd. Everyone began running, and I joined them as the chemical cloud spread in my direction.

One woman lay on the ground in agony, as others gathered around to support her and others affected by the spray. A young woman who had joined the protest passed out Maalox to rub on their faces and eyes to neutralize the burning.

The context for this week’s protest

This is not the first protest of favela residents against the violence of Pacifying Police. Last July, Rocinha residents took to the streets when resident Amarildo “disappeared” after being taken into custody at the local UPP. Investigations later revealed that he had been tortured and killed by Pacifying Police officers and the local UPP Commander was involved. Residents of Pavaõ-Pavãozinho similarly protested following the death of DG, a dancer involved in a local production. Police initially said he had fallen, but others said he was mistaken for a traficanteand killed by police. The incident is still under investigation.

The situation in Chapéu and Babilônia is radically different than it was two years ago. When I conducted interviews with residents and community leaders here in 2012, the vast majority of those I spoke with felt that pacification was an improvement over the prior situation, in which an outside drug faction had violently taken control of the hill. They expressed concerns about offensive and disrespectful police behavior, such as searching innocent minors while yelling and swearing at them. However, they said this behavior was worse during the first six months and most police had calmed down, with the exception of new officers who had yet to adjust to the community.

The local UPP Commander at the time was a charismatic individual who had made efforts to reach out to local organizations, churches, and community leaders. The Residents’ Association in Babilônia reported that the UPP actually consulted them and the Commander would listen to complaints leaders relayed from residents about officer behavior. Residents expressed a cautious hope that things were getting better, though many had doubts about what would happen after 2016 (when Rio hosts the Olympics). Compared to other pacified communities, Chapéu and Babilônia seemed to be successful cases.

What changed during these past two years? Pacification was an attempt to reconstruct the image and culture of police, a move from siege-style operations to proximity policing. It faced the challenge of building trust against a history of police violence and corruption, especially in the favelas.

Amarildo’s “disappearance” and the subsequent international “Where is Amarildo?” campaign on the heels of last year’s June protests marked a major shift in popular media and protest discourse regarding pacification. Other victims of police violence began to be referred to as “another Amarildo.” Amarildo became a symbol of continued police corruption and state repression in the favelas, a symbol powerful enough to shake trust that had been built at the local level.

Not all residents agree with those crying, “Out with the UPP!” (In fact, it is currently a highly politicized issue with elections approaching in October.) Others think the program in itself is a good idea but that it is seriously flawed in its implementation. They want quality security, just like they want quality schools and quality healthcare.