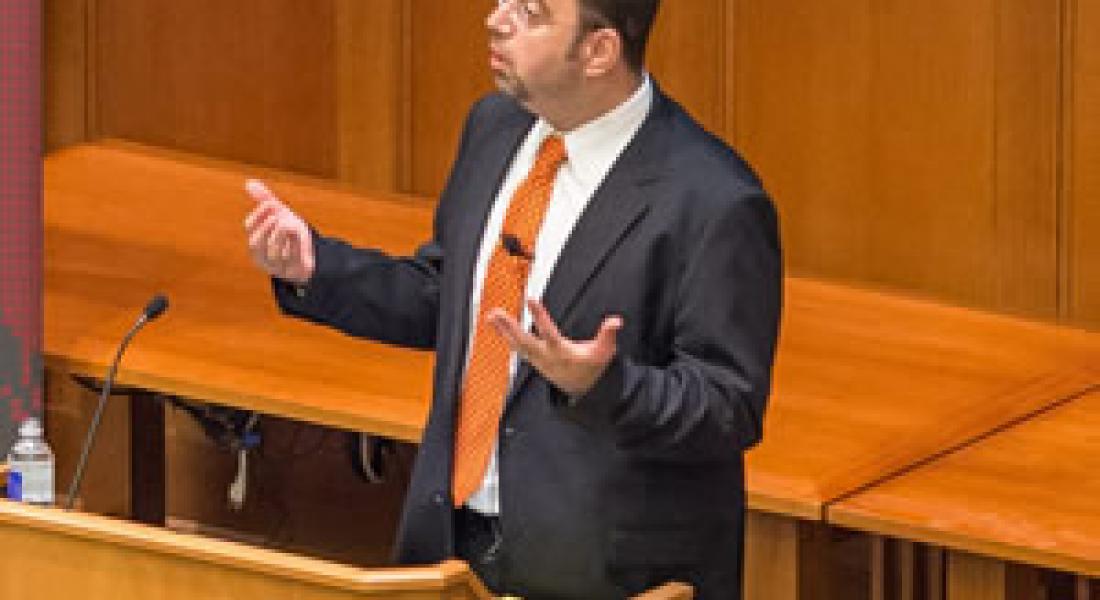 “We live in a hugely connected, globalized, unified world—but despite that there are real differences in prosperity,” he said. “Income is only one facet of a broader set of differences around the world. If you look at quality of life and the security and services provided by the state there are huge gaps.”

“The state not functioning well is a critical factor.”

In a wide-ranging address that drew on anthropological and historical case studies from Nigeria, ancient Greece, and Tudor England, Acemoğlu called for “capable state building” that brings with it the capacity to control violence, tax its citizens, deliver public goods and services, and build a competent government bureaucracy.

The most “dynamic development path” occurs when pluralism—which he defined as the distribution of political power in a society where society is able to resist the state—grows along with state control, he explained.

“It was vintage Daron. An important, grand, and unmanageable topic for most but one that he handles with the greatest of ease,” said Faculty Fellow William Evans, the Keough-Hesburgh Professor of Economics and chair of the Department of Economics. “It is wonderful to see his mind at work.”

“Acemoğlu reminded us about the importance of state capacity for economic development,” he said. “But he added an important twist: developing sustainable state capacity is not a top-down but a bottom-up process in which civil society has played a key role. His triangulation of civil society, state capacity, and democracy reminded us of Guillermo O’Donnell’s ambitious intellectual agenda during his last years at Kellogg.”

The Elizabeth and James Killian Professor of Economics at MIT and one of the most cited economists in the world, Acemoğlu is known beyond academia for his best-selling book with political scientist James Robinson: Why Nations Fail: Origins of Power, Prosperity, and Poverty (2012). In 2005, he received the prestigious John Bates Clark Medal, awarded for significant achievement by an American economist under 40.

The annual lecture, funded in part this year by the Johnson Family Endowment for Excellence, rotates between host institutions. It is designed to carry forward the enduring legacy of O’Donnell’s scholarship by focusing attention on work furthering its core themes, the twin aspirations of political participation and human welfare.

Speakers for the series, which was hosted in its initial two years by the Kellogg Institute, are chosen from among distinguished scholars, public intellectuals, and policy makers who have made major contributions to understanding or promoting democracy and human development around the world.