MacKenzie (Kenzie) Isaac is a Class of 2020 graduate who majored in Sociology, with minors in Latino Studies and Data Science. During her tenure with the International Scholars Program, Isaac worked with Professor Karen Richman to draw parallels between climate change, migration patterns, and community-level outcomes across the (Afro-) Caribbean Diaspora. Isaac and Richman's most recent projects employed both demographic and life course theories to examine the impacts of natural calamities, urbanization, and globalization on fertility rates in Haiti. One of the presentations resulting from their inquiries focused on the myth of Haitian depopulation, calling into question the use of fertility rates as a sound human development metric for countries with both high farming populations and high emigration rates among highly educated citizens ("brain drains"). Isaac and Richman presented this research at the 2019 Latin American Studies Association Conference in Boston, MA. They extended this project to consider the influence of man-made and natural disasters - such as logging, trash dumping, earthquakes, and floods - on Haiti's population dynamics. They mapped the timelines of these disasters against Haiti's political regimes to provide an in-depth analysis on the dual effects of climate and politics on Haiti's population. This research was presented at the 2019 Haitian Studies Association Conference in Gainesville, FL.

During her final year at Notre Dame, Isaac completed an Honors Sociology thesis on intergenerational perspectives towards the practice of skin bleaching among young Caribbean Americans and their families. Her thesis concluded by proposing a culturally responsive, community-informed health education model for Diaspora communities to implement as they raise awareness of the social, emotional, and public health harms of skin bleaching. Since graduating, Isaac has become Director of Volunteer Engagement for Omena, a youth-run, global nonprofit aiming to eliminate emotional abuse through educating youth on social and emotional intelligence, body safety, and healthy relationship building. Isaac also leads the Committee on Health Equity for Health Advocacy Summit, a youth-run chronic and rare illness advocacy organization based in the United States.

The profile below was current as of 2020 when she was part of the on-campus Kellogg community.

Broadly, Professor Karen Richman and MacKenzie Isaac are interested in studying the out-migration and return migration patterns of Afro Latinos, particularly those on the island of Hispaniola (the shared geographical space of Haiti and the Dominican Republic). Professor Richman and Isaac research how culture and identity are reproduced beyond the island, and how both economic and health behaviors are shaped by movements from one physical and cultural landscape to another. Isaac’s current project is on the misinformed portrayal of an overpopulation crisis in Haiti, how this portrayal is rooted in longstanding bias against developing countries of the African Diaspora, and why Haiti’s reality of decreasing fertility is a concern not only for those on the island, but for common host nations to Haitian migrants, such as the United States and Canada. This research debunking the myth of Haitian overpopulation and critiquing the family planning programs imposed to stifle Haitian fertility will be presented at this fall’s Haitian Studies Association, and this spring’s Latin American Studies Association.

2022 - Rhodes Scholar; provides full financial support for a degree or degrees at the University of Oxford 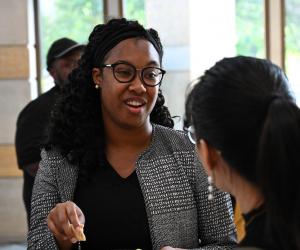 International Scholar Studies Culture of Skin Bleaching in the Caribbean 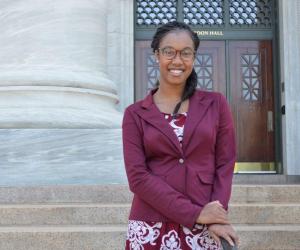 Kellogg International Scholar MacKenzie Isaac ’20 knew she wanted to improve her Spanish skills at Notre Dame. But to be truly fluent, she needed to learn more than the language.