This summer, I had the unique opportunity to intern for Child Family Health International (CFHI) in Córdoba, Argentina. My primary objectives in the program included shadowing physicians in various hospitals, as well as taking Spanish language and Argentinian culture classes. Through my observation in different clinical sites, I was able to gain a deeper understanding of the healthcare system in Argentina, including the government policies that influence day-to-day hospital operations. The Spanish language and culture classes expanded my linguistic and cultural competency, allowing me to create a more balanced picture of Argentina and the citizens that reside in this beautiful country.

For the first four weeks of my program, I interned at Hospital Rawson. This public hospital is known as the premiere infectious disease hospital in Córdoba. They also provide federal and public health awareness campaigns on sexual and reproductive health, vector-borne disease prevention, and maternal and child health. While observing in one of the inpatient pavilions, I was able to observe cases of infected abscesses, pulmonary clots, pancreatic cancer, cellulitis, and more. Following rounds in the morning, the doctors would go around the table sharing the current evaluation of their patients and asking for guidance from their colleagues. It was very beneficial to be exposed to high-level medical discussions on multiple patients and hear the doctors’ thought processes in creating treatment plans. Although, at times, it was difficult to keep up with the medical terminology the physicians were using, as I am not a medical student. Argentinian Spanish is already difficult to understand in and of itself, so it was frustrating to sometimes feel lost during their conversations. In order to improve my understanding, I took it upon myself to write down all of the terms I was hearing, foreign and familiar, and research them when I came home. This effort made a noticeable difference as the weeks went on, and I began recognizing pathologies I had seen previously in new patients. In addition, I had the opportunity to observe gynecology surgeries, and to observe a mastectomy, a reconstruction, and a hysterectomy. Interning at Hospital Rawson was an incredible first exposure to Argentina’s public healthcare system, and the clinical knowledge I gained was invaluable.

During the last four weeks of my program, I worked at Hospital Córdoba. This facility is the largest tertiary public hospital in Córdoba and is the main referral hospital for complicated cases. The hospital also houses a burn unit and serves as the main transplant center in the region. I had the opportunity to rotate through multiple specialties, including inpatient services, dermatology, the Emergency Room, and general surgery. In contrast to my time in Hospital Rawson, this time I worked with residents instead of independent physicians. In internal medicine, I observed a wide variety of pathologies including patients with: a collapsed lung, cardiac arrest, nutritional malfunction, pneumonia, and more. The emergency room presented a starkly different environment than internal medicine. Cultural beliefs in Argentina sometimes lead to waiting for the illness to progress for a long time before seeking professional medical help. Due to this, a majority of the patients that come into the emergency room are in grave condition. The clinical cases I had the chance to see include diabetic acidosis, hernias, gastroenteritis, and more. While interning in emergency surgeries, I was able to observe an appendectomy and a hysterectomy. In contrast to the US, emergency medicine doctors in Argentina are trained to perform emergency surgeries if needed.

The Argentinean government strives to offer medical access to all of its inhabitants, regardless of income or citizenship. In Argentina the healthcare system is organized in three main sectors. The public sector provides free clinical care for hospital inpatients and outpatients. In the public sector, the staff is often overworked, underpaid, and resources are limited. At times, doctors did not have the correct type of durable gloves and would instead wear two pairs of thin gloves. In addition, they often lacked modern technology such as a machine to perform an EKG or a CT scan. The lack of resources can also be seen in the fact that medical records are all on paper in the public sector. This practice differs in the United States, where the vast majority of patient histories are electronic. This proves to be useful when a patient changes hospitals, and the doctor can easily transfer all relevant medical information. The Ministry of Health is in charge of the state-run healthcare system and is responsible for regulating, evaluating and collecting statistics. The public sector covers about fifty percent of the population, which includes individuals who do not have insurance due to unemployment or “black market” employment. The second sector includes “social plans” or insurance of approximately three hundred different types. The social plans are administered by trade unions, and employers and employees each pay a fixed fee. The social plan covers the cost of medical care and medicines in varying proportions; the patient pays differences between the fixed fee and the actual cost of treatment. These plans cover around forty-five percent of the population.  The third sector includes the private sector. In this sector, patients meet the total cost of their medical care.

While countless discussions can be had, and should be had, about the differences between the healthcare systems of Argentina and the United States, the most important thing to remember is the love that the doctors have for their patients. They continue to work in underfunded environments not for the prestige, but because they see the value of helping to improve the lives of their fellow citizens. They consider it their duty to work as hard as they can to provide the best possible treatment, all the while treating their patient with the utmost respect.

Along with clinical observation, my program included Spanish language and Argentine culture classes. These classes were a valuable supplement to the information I learned while interning at the different hospitals. They also provided important historical and cultural context for many of the policies that are implemented in Argentina’s healthcare system. For the second month of my internship, CFHI decided to bring in a guest professor for the advanced Spanish class I was taking. Our multifaceted discussions regarded topics such as the new abortion and organ donation bills, HIV/AIDS treatment, and structure of graduate school programs.

While the clinical opportunities of the program were invaluable, the personal relationships I developed with both locals and fellow interns made the experience unforgettable. In order to meet more people from the host culture, I enjoyed attending weekly meetings called “English and Mate” and “Spanish and Cerveza”. The location of these meetings changed every week, and the main purpose was to serve as a bridge of learning between locals and foreigners. During English and Mate, the whole hour is spent conversing in English while sharing the classic Argentinian cultural drink, a strongly flavored tea called mate. For the subsequent hour, the roles switch, and we were able to discuss in Spanish. I loved getting to know more about the local culture, meet fascinating people of all ages, as well as continue to advance my Spanish speaking skills. I left with the impression that Argentines are warm, friendly and passionate people, especially where soccer is concerned. They are very open-minded and show a high level of acceptance towards people of all cultures. The welcoming attitude expressed by everyone I met, from doctors to locals, was incredibly helpful in making me feel comfortable and content during my stay in Córdoba.

I am eternally grateful to the Kellogg Institute for International Studies for this transformative experience. Through my internship with Child Family Health International, I was able to grow as a both a student and a citizen of the world. The Hospital Medicine program afforded me the unique opportunity to observe physicians in a wide range of clinical environments, as well as broaden my linguistic and cultural fluency. On the fifth floor of Hospital Córdoba, there is a colorful quote inscribed on the fourth-floor wall. It proclaims, “No Perder La Humanidad”, or do not lose your humanity. I will always carry this powerful message with me as I move forward in my journey to become a medical professional. 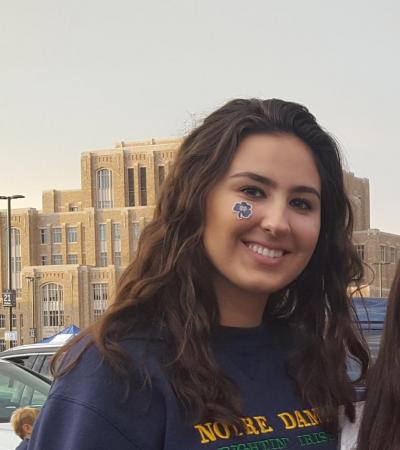