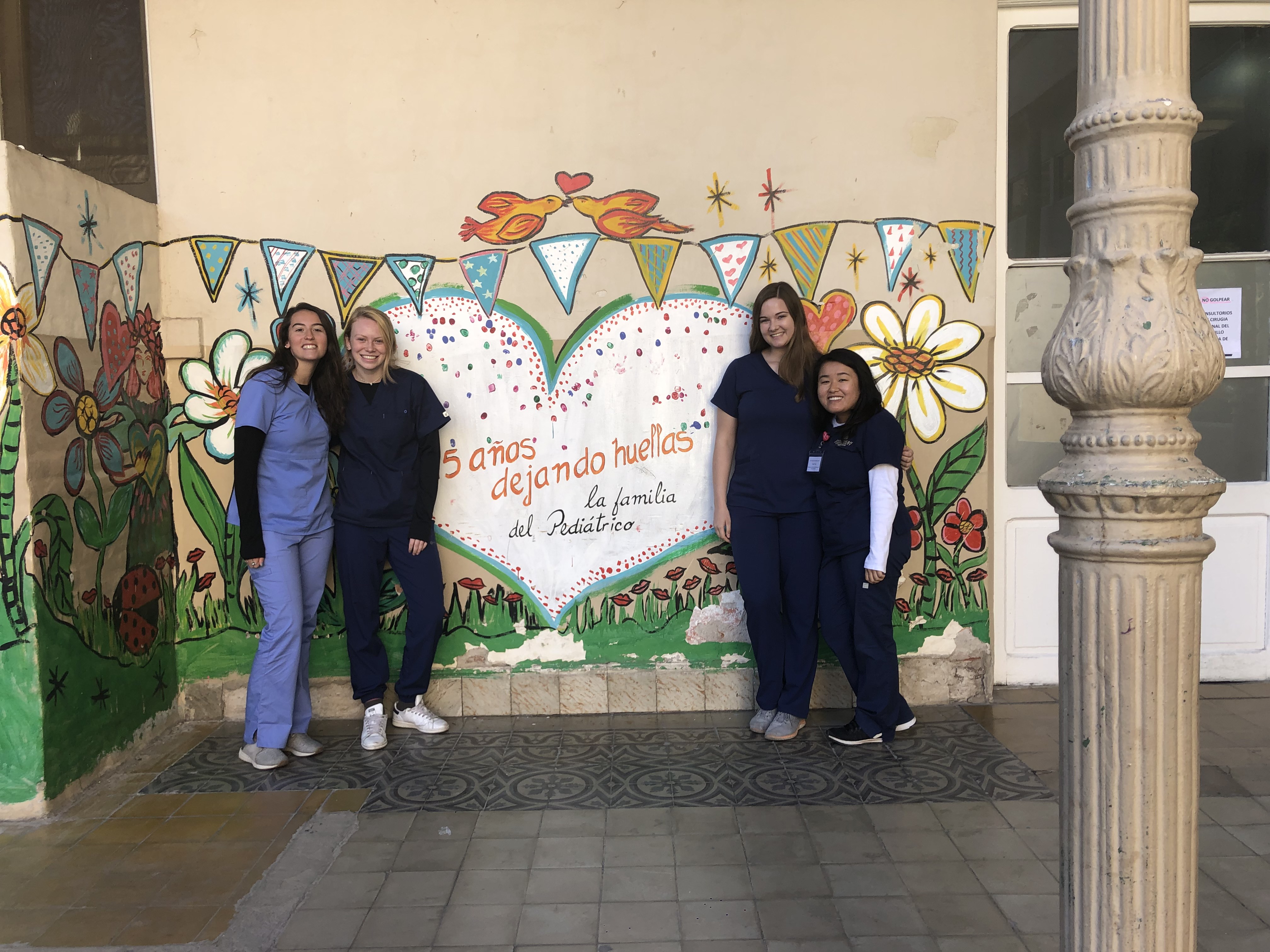 Through the Kellogg Institute’s Summer Entrepreneurial Internship this summer, I partnered with Child Family Health International (CFHI) as a clinical intern in their “Primary Care and Social Medicine” program. When I first heard about the program, I was enticed by their focus on teaching interns through public hospital observation, cultural exploration, and Spanish language classes. As a premedical student, I was especially interested in learning more about the medical profession and exploring different medical rotations, but I was equally interested in expanding my linguistic competency in Spanish. When I learned that I had received funding from the Kellogg Institute to participate in this experience, I was beyond excited; even though I was pushed out of my comfort zone in almost every way during my time in Argentina, I loved and grew from every part of my experience.

During the first five weeks of my internship in Argentina, I worked at Hospital Pediátrico, a public pediatric hospital located centrally in Córdoba. Along with medical care for children, the hospital also provided informational sessions for patients on topics such as caring for their child’s asthma, which I was able to attend. My role in the hospital was to observe physicians in order to better understand the healthcare system in Argentina. Child Family Health International encourages program participants to “let the world change them” instead of performing medical tasks that they lack the training for. At first, I found it difficult to only watch the interactions since I felt like a hindrance to the medical staff; however, this ethical respect for patients made my experience even more insightful since I discovered that just as much can be learned through simply listening and watching. During my time shadowing the doctors, I was able to rotate between different medical specialties, including pulmonology, ophthalmology, surgery, and kinesiology. Additionally, I was able to observe a laparoscopic nephrectomy and a tonsillectomy. In each area, I was not only able to learn more about what each specialty entailed, but I was also able to better understand how the public healthcare system works and how doctors interact with their patients (and the families of those patients) in Argentina. Since this was the first hospital that I worked in, I initially found it difficult to adjust to the medical vocabulary in Spanish at first as well as the pace of speaking. Even though I struggled with comprehension in some situations, the doctors took time to explain what they were doing every time I asked a question. Overall, this hospital experience was a great start to my internship in Córdoba since it allowed me to explore multiple specialties of medicine within pediatrics while providing me with a well-rounded view of public healthcare. 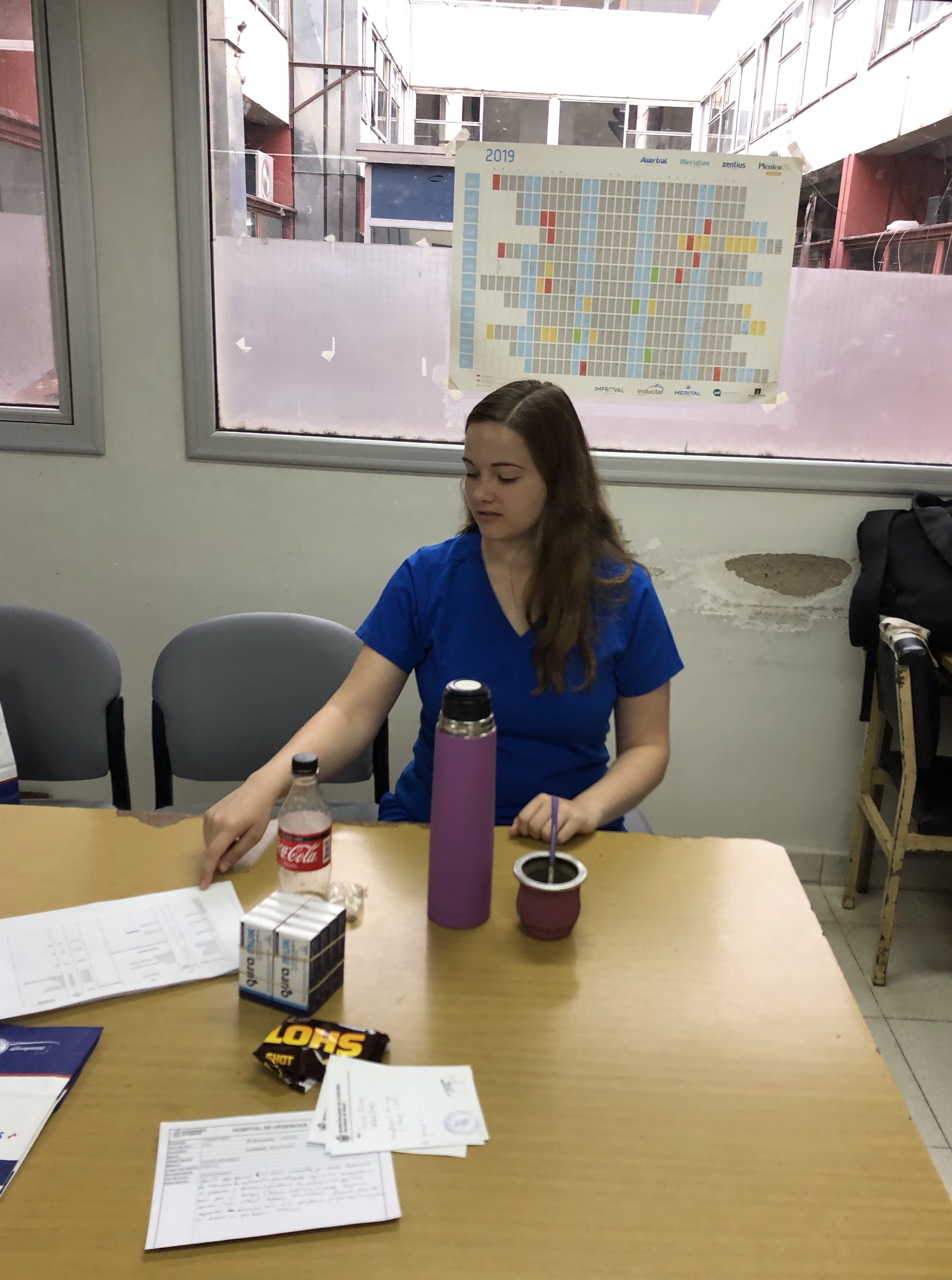 For the final three weeks of my program, I shadowed at Hospital de Urgencias in the guardia (the emergency room). Even in a more high paced setting, I witnessed strong relationships built between the doctors and their patients. Each doctor took their time getting to know the patient, which usually helped them to determine the best treatment for each patient. Furthermore, there were many more residents at Hospital de Urgencias than at Hospital Pediátrico. It was interesting for me to watch how the residents were trained and regarded in the hospital, since many of them were performing their first EKG reading or stitches. The doctors in this hospital also spent time getting to know me as well; each day, they would share mate (a common hot tea drink) and snacks such as pastries while explaining patient pathologies and more about Argentina’s healthcare system with me. The variety of patient cases that I observed included dog bites, stab wounds, infections, broken bones, heart palpitations, and cuts. I found my time at Hospital de Urgencias to be just as insightful and engaging as my time at Hospital Pediátrico, and I am glad that I was able to experience both entirely different healthcare environments.

Aside from my time in the hospital, I also attended cultural classes every other evening that complemented the information that I learned in the hospital. At times we would take our conversations outside of the classroom and tour museums such as the Memorial Museum in memory of the desaparecidos (disappeared ones) during Argentina’s military dictatorship. Our discussions in the classroom ranged from healthcare debates over abortion and assisted suicide to conversations regarding what we noticed in the hospital and wanted to learn more about. Differences between medical care in Argentina and the United States on topics such as patient privacy and sanitation were explained in a cultural context in these classes. Since my professor was a medical doctor in Argentina, he was an invaluable resource for my understanding of the public healthcare system in Argentina. For example, he taught us in depth about the difference between the private and public sectors of the healthcare system. Although Argentina’s healthcare system emphasizes that healthcare is a right by making healthcare accessible to all people that need it, there are still imbalances in the resources provided to some patients. The public hospitals (where I interned) are only accessible to patients without health insurance (obra social) while those with health insurance are referred to private clinics with more supplies and technology for their medical care. I was able to observe in the hospitals, however, that the public hospitals were still able to provide quality time and exceptional care to their patients even without resources such as abundant supplies of gloves or new technology.

Along with cultural classes, I also took Spanish classes two times each week. These classes really complimented my immersion experience and allowed me to practice grammar and speaking as well as Spanish vocabulary that was useful in the hospital. I was also able to learn more about Argentinian Spanish which I discovered was very different from the Spanish we had learned in school. These classes definitely helped me to feel more comfortable with the new vocabulary I was hearing and the different dialect so that I could feel more like a part of the community.

While time spent in the hospital and classes were extremely useful for my understanding of the medical system in Argentina, I learned an equal amount from the personal relationships that I was able to form. Child Family Health International paired me with a host family that included a mother and her nine year old daughter. I really enjoyed being a part of a family setting, since I was able to spend time playing games and interacting with my host sister while having completely different interactions with my host. Through this relationship, I was able to try authentic Argentinian food each night and learn more about typical life in Argentina while feeling like part of a family. During my time in Córdoba, I also joined a local gym and met new friends there as well, making me feel even more like a part of the community. Another important event where I was able to foster new relationships while practicing my Spanish was called “English and Mate”. During this event almost every Thursday night, I would spend time talking to other local students that wanted to practice their English or Spanish in a comfortable setting. Typically, I would speak in Spanish and the person I spoke with would respond in English; I felt as if I improved dramatically in my confidence in Spanish speaking in this setting since it was so inviting. I found that Argentinians overall are very open to discussion and building close relationships with people that they meet which encouraged me to form these integral relationships during my experience.

Over the eight weeks that I was lucky enough to spend in Córdoba with Child Family Health International, I learned so much about medical care and Argentina’s healthcare system all while building impactful relationships and improving my ability to converse in Spanish. After completing this internship, I feel as if I am a better global health citizen with more resources to advocate for a larger demographic of patients in the United States and abroad. Furthermore, the knowledge that I have gained will continue to guide me as I pursue a career in the medical profession, especially in the way I will be able to communicate with patients. 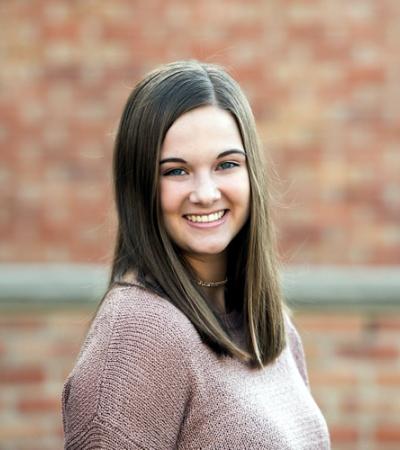