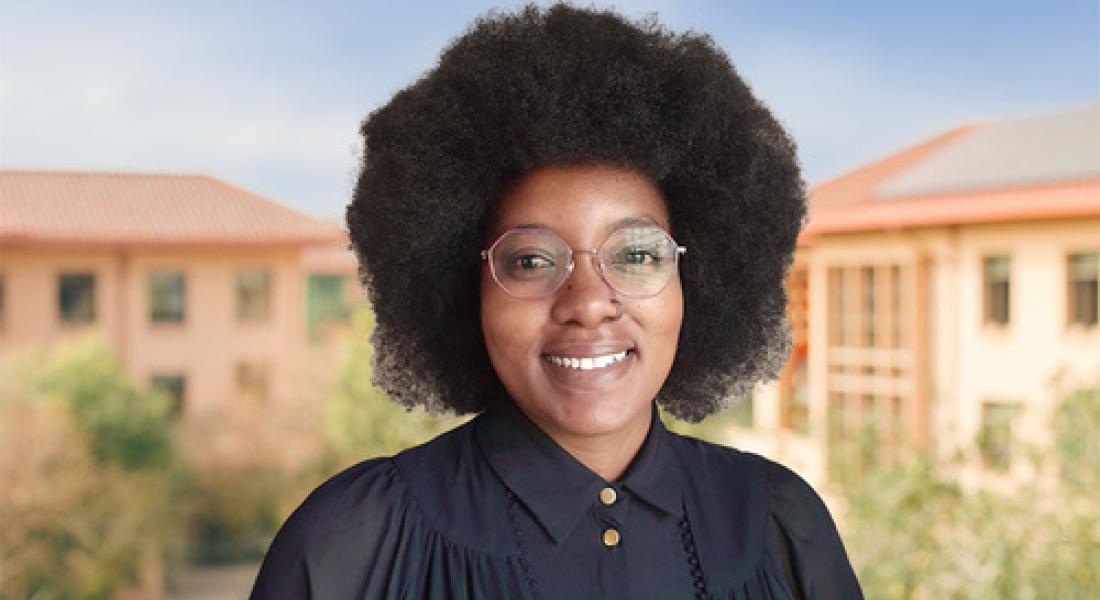 First awarded in 2018, the Knight-Hennessy Scholars Program covers tuition and other expenses for graduate or professional study, up to three years, at Stanford University.

A native of Zimbabwe, Mukumbi graduated from Notre Dame in 2016 with a degree in English/Africana studies. As a senior, she won the Hammon-Wheatley Creative Arts Award, the Richard Sullivan Prize for Short Fiction and the Notre Dame Leadership Award. She was executive producer of the monologue show “Show Some Skin,” which gives voice to unspoken stories about identity and difference at Notre Dame.

Mukumbi worked with Kellogg Faculty Fellow Paul Ocobock, associate professor of history, as her ISP advisor, exploring the rhetoric around questions of decolonizing higher education institutions, with a focus on three South African institutions. The research project included an examination of responses to calls for change, with special emphasis on the ‘Rhodes Must Fall’ movement at the University of Cape Town to the ‘Open Stellenbosch’ movement at Stellenbosch University.

In the fall of 2014, she received a grant from the Kellogg Institute to travel to the 57th Annual Meeting of the African Studies Association on Rethinking Violence, Reconstruction and Reconciliation. This in part inspired her senior thesis, titled "Violence and Transgression in Colonial Zimbabwe: A Comparative Analysis of Tsitsi Dangarembga’s Nervous Conditions and Yvonne Vera’s Butterfly Burning."

As a Hesburgh-Yusko Scholar, Mukumbi conducted research exploring art as a response to silence in the aftermath of tragedy in New York, Nairobi, Kenya and Makhanda, South Africa.

In recent years, she has taught at the African Leadership Academy in Johannesburg, South Africa; LEAF Academy in Bratislava, Slovakia; and USAP Community School in Ruwa, Zimbabwe.

As a Knight-Hennessy Scholar, Mukumbi will pursue a doctorate in curriculum studies and teacher education at the Stanford Graduate School of Education. She is interested in interventions in the English classroom that can inspire students to be lifelong readers – particularly, the role that young adult fiction can play in improving the quality of literacy for multilingual students.

In the long term, she hopes to open an art high school in her home region of Matabeleland, Zimbabwe.

“I believe the Knight-Hennessy Scholars Program is a unique opportunity to grow as a well-rounded student and an invitation to dream of better classrooms in a community of peers who are committed to building a better world,” Mukumbi said.

She thanked a number of individuals, including “my family and friends who encourage me to dream” and “the Africana studies department at Notre Dame, which exposed me to the type of community-based research that I aspire to carry out. I am also grateful to Professor Joe Buttigieg, who modeled an unflinching love for literature, as well as Professors Stuart Greene, Maria McKenna and Paul Ocobock, who have supported me in my journey as a writer and teacher.”

She continued, “My thinking has been shaped by friends and colleagues such as Chris Bradford, Taeyin ChoGlueck, L’ubica Lutz, Jaromír Sedlár, Dave Tait and Rebecca Zeigler Mano, who have served as inspiring soundboards in expanding my thinking about schools and community.”

Ocobock, for his part, described Mukumbi as a “born leader” in the classroom, “extraordinarily self-aware, ever mindful of her positionality and genuinely sensitive to the experiences of her peers.”

“Having lived in Zimbabwe and South Africa, Gerie volunteered her own experiences to make profound points about inequality, western imperialism and racism, among other topics,” said Ocobock. “Her formidable presence fundamentally changed the class, her fellow classmates and me for the better.”

Like previous Knight-Hennessy Scholars, Mukumbi worked closely with the Flatley Center for Undergraduate Scholarly Engagement (CUSE) to apply for the award. CUSE promotes the intellectual development of Notre Dame undergraduates through scholarly engagement, research, creative endeavors and the pursuit of fellowships.

”We were so happy to hear that Geraldine had been selected for the Knight-Hennessy Scholars Program,” said Jeffrey Thibert, the Paul and Maureen Stefanick Director of CUSE. “She truly represents the best of this University, both in terms of character and in terms of a commitment to using her talents and energies to improve the lives of others. It has truly been an honor to work with Geraldine. She is an extraordinary individual who has already done much to contribute to making this a better world but still believes she has much to do.”

For more on this and other scholarship opportunities, visit cuse.nd.edu.