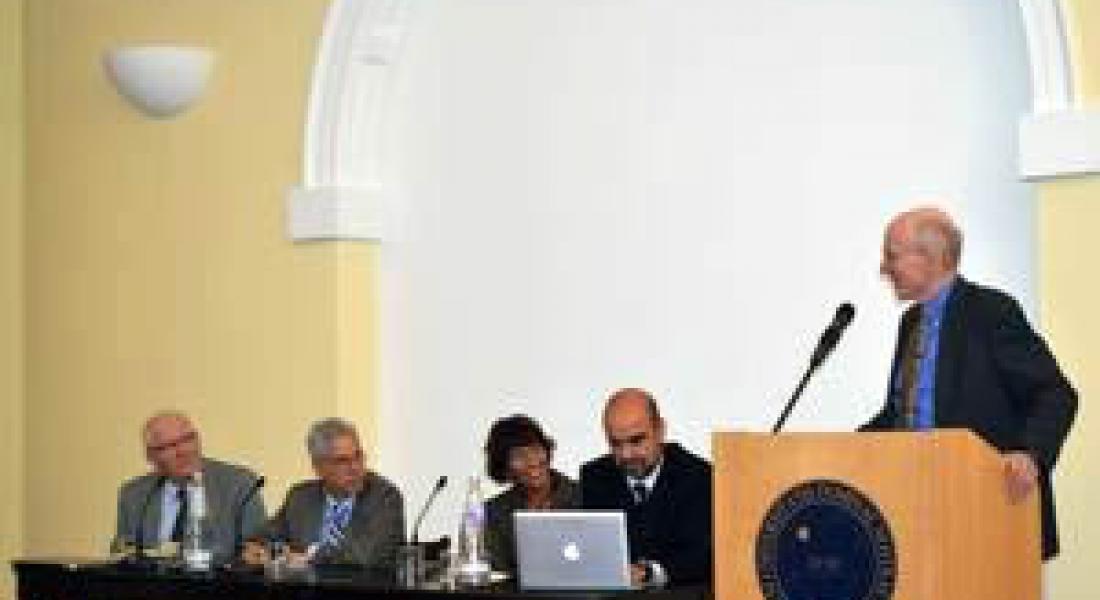 In the run-up to the October 2014 Brazilian general election, the ambassador of Brazil to the United Kingdom and academic experts from Notre Dame, the University of Oxford, and the Fundação Getúlio Vargas (FGV)'s Brazilian School of Business and Public Administration analyzed the economic, social, and electoral conditions over the coming months and beyond.

In introducing the panel—"The Brazilian Outlook 2014: Elections, Economy and Mega-Events"—Faculty Fellow Scott Mainwaring noted that it would be difficult to assemble a group of speakers with more talent and expertise on Brazil.

Organized by Mainwaring and Timothy Power, a Notre Dame PhD and former Kellogg visiting fellow who now leads the University of Oxford Brazilian Studies Programme, the event took place at the University of Notre Dames London Global Gateway on January 30.

Ambassador Robert Jaguaribe argued that in the last two decades, Brazil has developed from what his father, the well-known social scientist Hélio Jaguaribe, described as an "alluvial state" into a stable democratic country with a strong economy and social inclusion. Brazil is the only large emerging country that does not confront challenging national integration issues, he said.

Carlos Pereira of the Fundação Getúlio Vargas analyzed the coalition management strategy of Brazilian President Dilma Rousseff.  He questioned her political strategy of awarding the lion's share of cabinet posts to her own Worker's Party (PT), and he highlighted the government's waning legislative support among its alliance partners over the past year. He expects a competitive presidential election this year.

They also discussed the relationship between presidential approval ratings and electoral prospects. Given Rousseff's current approval ratings, they project that she is likely to win between 46% and 48% of the first round vote in October.

The final speaker was Power, who focused on the context of Brazil's 2014 elections.  The protests that rocked Brazil in 2013 did not fundamentally change Brazils political and electoral situation, he said.

Noting the advantages of incumbency in Brazilian executive elections, he agreed with Campello and Zucco that the scenario for Rousseff is generally positive. He argued further that, absent any missteps in policing and crowd control, the World Cup is unlikely to have much effect on the electoral outcome.

The event was well attended by academics from many UK universities, representatives from Brazilian organizations in London, members of the University of Oxford, staff and faculty from the London Global Gateway, and others interested in Brazil.