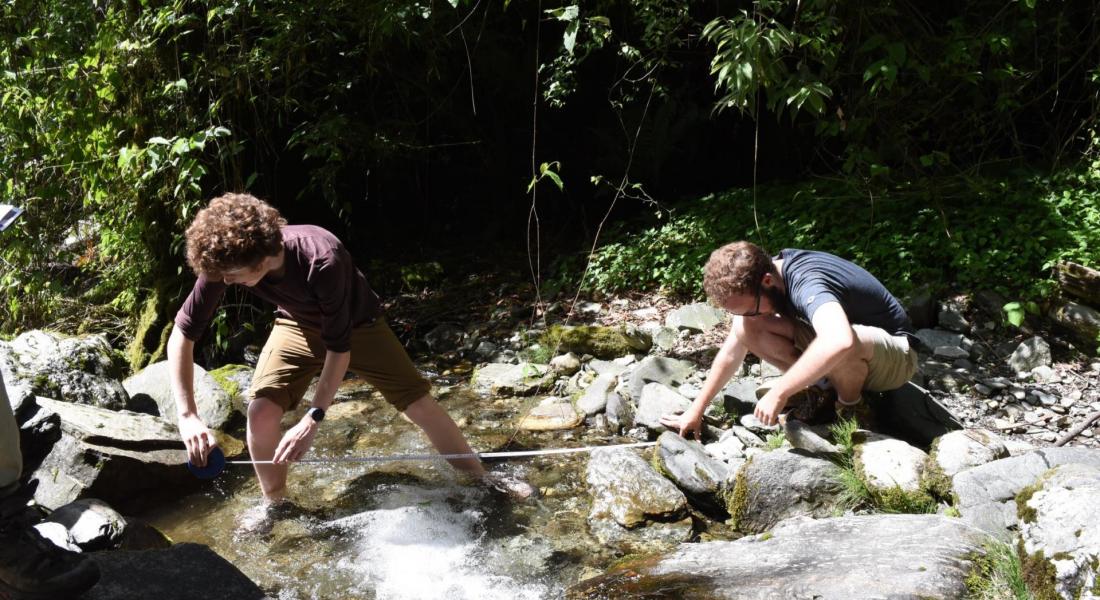 My work is performed in conjunction with the Annapurna Conservation Area Project (ACAP), the local governmental authority that oversees the entire Annapurna protected region. In fact, the owner of our lodging is a director of ACAP. Since arriving, this work has focused on a few main study areas.

The first of these is baseline monitoring of environmental indicators such as water quality.  We collect this data by trekking to select streams and rivers and analyzing water metrics and presence of macro-invertebrate indicator species. This data is subsequently transferred to ACAP.

The second main study area, which accounts for the bulk of my work, is directly monitoring vulnerable organism populations through surveys in the lush rainforests surrounding Ghandruk. These surveys, which separately look for bird and butterfly populations on predefined routes, routinely identify dozens of indigenous species found only in this region of the Himalayas. Over time, I have become very adept at identifying common species with just a glimpse through binoculars. One interesting aspect of these surveys accompanied the construction of a new ‘road’ through a previously lightly traveled path. It was immediately clear that the road had significantly decreased the number and variety of species seen along the route. This revelation left me with conflicted feelings; it was clear that the road also brought some basic infrastructure to a community that was previously a day away from any transportation not on foot. These sorts of contrasts, between heritage and modernity, poverty and environment, are common.

These surveys are the backbone of our daily schedule— we usually are able to perform a morning and afternoon survey, dependent on weather. The abundance of nationalities that are volunteering here allows for interesting conversation during surveys and free time. The fact that most volunteers speak English has aided my adjustment to Nepal— not being forced to speak another language every day allows me to focus on other aspects of the experience. For example, I often join the cook, Bishal, to help him cook our meals. This time highlights our common interests, hip-hop music, and chess, across language barriers.