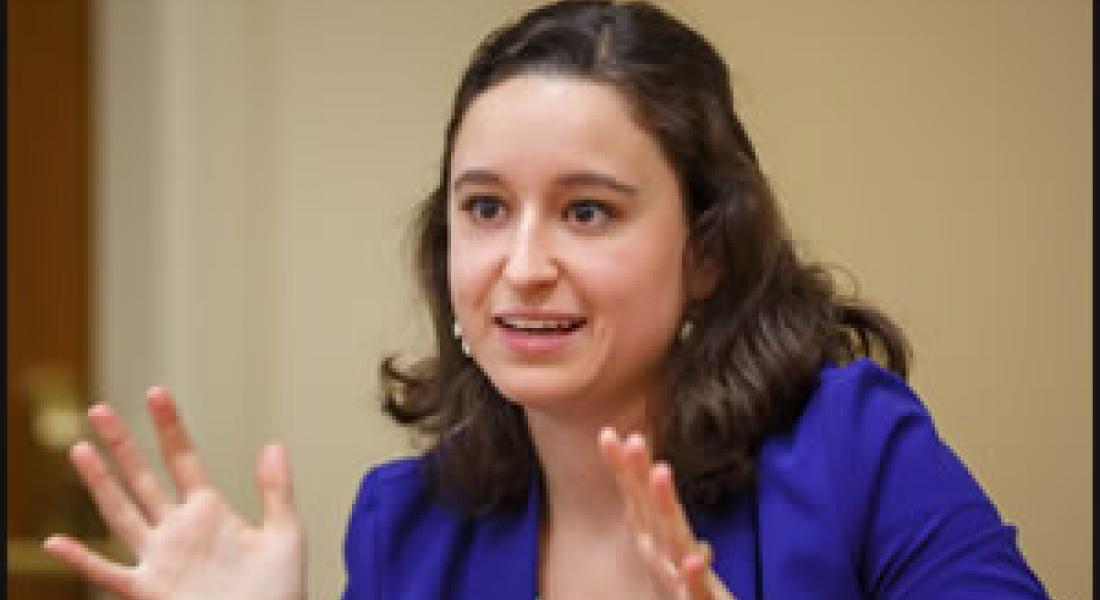 As a student of modern Africa, International Scholar Emily Mediate ’15 knows all too well about HIV/AIDS and its ravages—almost 1 in every 20 adults in Sub-Saharan Africa now carries the virus, a staggering 71% of the nearly 78 million persons infected worldwide.

But Mediate, an Africana studies and pre-health double major, has a unique take on the subject of global HIV/AIDS treatment.  She believes that health professionals have been entirely too focused on material goods—anti-retroviral medicines, condoms, and prevention pamphlets.  These objects, she says, now dominate the international HIV/AIDS agenda.

Mediate asks:  “What gets lost in this view? With what alternative lens might we view the HIV/AIDS epidemic?”

We need to pull the focus back to the individual, she says—and she believes that doing so offers the key to both more effective prevention and treatment.

Mediate has immersed herself in research as an undergraduate—much of it related to HIV/AIDS.

Like all new International Scholars, Mediate teamed up with a faculty mentor—in her case, Faculty Fellow Terence McDonnell. For his research and analysis of trends in 2200 HIV/AIDS prevention posters from over 80 countries, she first coded the posters’ imagery, then delved into literature reviews, and finally, senior year, used the computer program STATA to help perform a sophisticated analysis of trends in the posters’ communication strategies.

“What we are learning is that the prevalence of certain images—whether condoms, red ribbons, or skeletons—can tell us a great deal about the culture of a particular country and what prevention strategies are thought to be most effective,” Mediate relates. “Red ribbons may suggest an emphasis on awareness, whereas skeletal imagery is a clue that prevention efforts might be aimed at tapping into a particular cultural fear of dying.”

McDonnell values both Mediate’s research skills and her intellectual curiosity.

“Emily asked challenging questions about how best to categorize the data and independently noticed trends within it,” he says.  “Her insights have yielded fruitful research agendas that made the project better.”

The research for Mediate’s senior thesis takes on a different subject:  how the role of foreign aid for healthcare has affected—indeed, corrupted—HIV/AIDS interventions in Uganda.  Awarded a Kellogg/Kroc Undergraduate Research Grant, Mediate traveled there last summer to conduct interviews with physicians, patients, civil organizations, and health officials, as well as to analyze massive amounts of archival data.

In her thesis, “Disabling Donor Demands: The Coercion of the International HIV/AIDS Agenda,” she argues that international funding for HIV/AIDS has constrained local efforts by driving local organizations to undertake one-size-fits-all approaches—nearly all of which are biased toward material solutions.

She advocates a different path.

“A person’s gender, age, marital status, economic status, and education are all vitally important when assessing the optimal response to HIV/AIDS,” Mediate explains.  “This is a disease for which there is no one strategy.  Handing out boxes of condoms is not going to work if those boxes go to a woman who then must overcome the hurdle of convincing her husband to use them.

“The key to effective prevention and treatment is for health professionals to consider the unique parameters of each person’s life and tailor the intervention to them.”

Mediate’s research in Uganda was the basis of a prize-winning presentation this January at Harvard University’s National Collegiate Research Conference.  In the spring, she will present on her thesis topic a second time—as the only undergraduate presenter—at the University of Texas at Austin’s Africa Conference.

International Scholars learn research skills, reap the rewards of faculty mentoring—and have access to some exceptional opportunities through the Kellogg Institute. In fall 2014, Mediate won one of two highly contested spots to attend the Institute’s conference on human dignity and human development in Rome.

In her application, she wrote that she felt “compelled” to attend the conference.

It was a topic that captivated both faculty and students.

The standing-room-only crowd divided into interdisciplinary groups—business and economics, community development, conflict and policy, and global health—to discuss the theme of human dignity in their research and work. The 150-plus participants then gathered together to share ideas and continue the conversation.

“The program allowed everyone present to step back and see the connection to upholding human dignity in their own particular disciplinary context,” Mediate says. “Making that connection explicit was a revelation to many.”

Now a few months before graduation, Mediate is making hard decisions on her next step.  Accepted to an Oxford University master’s in social policy program, she is also exploring options in the international development and policy fields.

Whatever path she chooses will surely involve a close look at exploring the optimum ways to allocate funding for specific health interventions—and urging the adoption of those that keep a focus on the individual.

Emily was awarded both the Pamela Harriman Fellowship and the B. A. Rudolph Foundation Public Service Scholarship to support her summer internship at the State Department’s Bureau of African Affairs.

She also won a one-year Kellogg Institute International Development Fellowship. In the fall, she will begin working in Kampala, Uganda with the Association of Volunteers in International Service (AVSI).