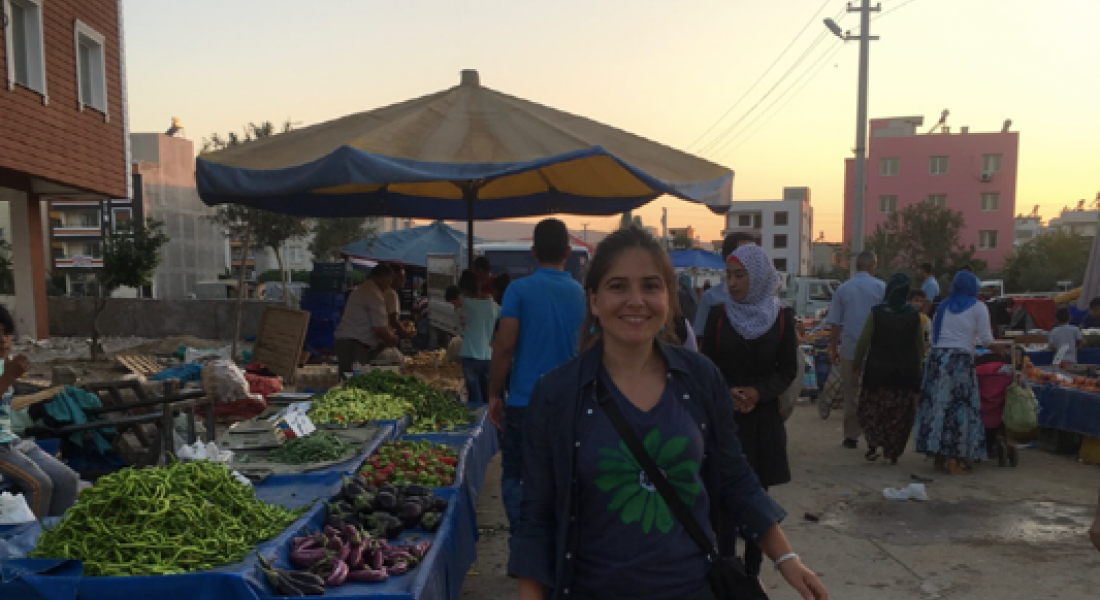 In July and August 2017, I had the opportunity to begin preliminary fieldwork in Izmir, Turkey over the span of three weeks. My research centers on how immigrant populations maintain their native languages as minorities and construct their identities. I study this question in Zazaki-speaking communities, also referred to as Zazas or the Zaza people. Zazaki is an Iranian language mainly spoken by 4-6 million people in Turkey and some of its speakers have migrated to Europe. My main goals for this research trip were to map out the landscape and establish connections with participants.

Although I had been to Turkey several times in the past with my family, I was not very familiar with Izmir. Upon my arrival at the airport in Izmir, I picked up my rental car. Shortly, I realized that driving a car for the first time in Turkey proved to be very challenging and at times even dangerous with pedestrians randomly crossing over the street and the constant honking of speeding drivers in a hurry to their destination. Apart from more aggressive driving habits in Izmir (located in western Turkey on the Aegean Sea), this is a wonderful city with a rich and diverse history. It has a population of over four million people and continues to grow each year.

I spent the majority of my time in the outskirts of Izmir, where the population is less dense, and there’s a higher chance of Zazaki being spoken in public. In these areas of western Turkey, the infrastructure is not as developed and the majority of people seem to be of lower socio-economic background. The outskirts of Izmir are especially an interesting field site for my dissertation research due to its large attraction to people of Zazaki and Kurdish backgrounds from southeastern Turkey. Interviews with a couple dozen people revealed that most moved to this city in the 1980s and 1990s for economic reasons (i.e. job opportunities (work in factories, construction, and seasonal work in general). In this photo, we can see that many of the apartment buildings are only a couple decades old and new ones are continuously being built.

My informants explained to me that their move to Izmir was usually due to their social connections (e.g. they knew a relative or friend who had moved here). In some cases, the men had come to Izmir for a couple years as seasonal workers before the entire family moved permanently.

For instance, over the summer, many of the unemployed women with modest backgrounds in formal education, as well as teenage girls who are off from school, go tomato picking. Although people from the southeastern Turkish cities have largely also migrated to Istanbul, I was told that living conditions are much more expensive there, which is why people seem to prefer Izmir for its relatively lower living costs, particularly when it comes to rental prices. In Izmir, besides talking to people face to face, I also walked through the streets and was able to observe people in their daily lives, such as market visits. In other cases, families who invited me in their homes, I was able to capture methods of food production, such as the making of tomato paste (restricted to summer months). In July and August, in many of the outskirts one could smell the different stages of the tomato paste preparation; such as letting the tomatoes sit, then after the juicing allowing them to dry on the roof tops/balconies.

Some people who arrived in the outskirts of Izmir seem for the most part to possess their own apartments, which they’ve often times built themselves. As people’s economic situation improves, some of them look to move outside of the more poor and undeveloped areas. Thus, it was not rare to read signs of “Bu ev satiliktir (this house is for sale)” as we can see in this photo below. Some of these houses labeled for sale had Syrian refugees housing in usually because of their low rent cost.

This is a privately owned small shop mainly selling women’s and children’s clothes. The owner was a Zazaki speaking woman who was running this business for three years now. The little girl of Zazaki background had her mom just purchased this outfit for her from this store. (parents’ consent was granted for the use of this photo) Besides visiting a handful of people in their homes, I was also able to visit religious sites. While Turkey is primarily known as a Muslim country, yet there are two different sects practiced which strongly differ from each other – the Alevites and Sunni Muslim. Alevism is a sect of Shia-Islam and there are about 20-25 million Alevites in Turkey, although the majority of Turkey’s citizens practice Sunni-Islam. Compared to Sunni Islam adherers, Alevites enjoy relatively few rights to express their religion. Despite their large numbers, Alevite religious houses do not receive any government funds compared to the mosque which is an institute that serves Sunni Muslims.

This initial visit to Turkey provided me with the opportunity to map the landscape, connect to dozens of people, particularly to identify key informants, garnering a great of data in voice recordings, photos, and observations. Above all, I was able to recognize some preliminary patterns in regard to community and identity construction among minority migrant populations. For instance, although the Alevi Zazaki and Sunni Zazaki speaker share similar migration story and the same language that differs from Turkish, yet little community building seems to take place between the two groups. However, more research needs to be done in regard to which cultural factors such as language and religion influence migration settlement and community and identity development in which ways.

In this new academic year, I will be analyzing my field data and presenting them at conferences. I will attend the American Anthropological Association annual meeting at Washington, D.C. this fall to chair my roundtable on “Migration, Media, and the Politics of Representation” and present a research poster on my fieldwork findings in Turkey and Germany this past summer. I also submitted an abstract to present at the Yale Kurdish Conference in April 2018 where I look forward to networking and analyzing my research with Kurdish Studies experts from all over the world.

Thanks to the generous support from the Kellogg Institute, I feel more prepared and confident to use my field work data to prepare for my upcoming comprehensive exams and plan future fieldwork visits to Turkey.