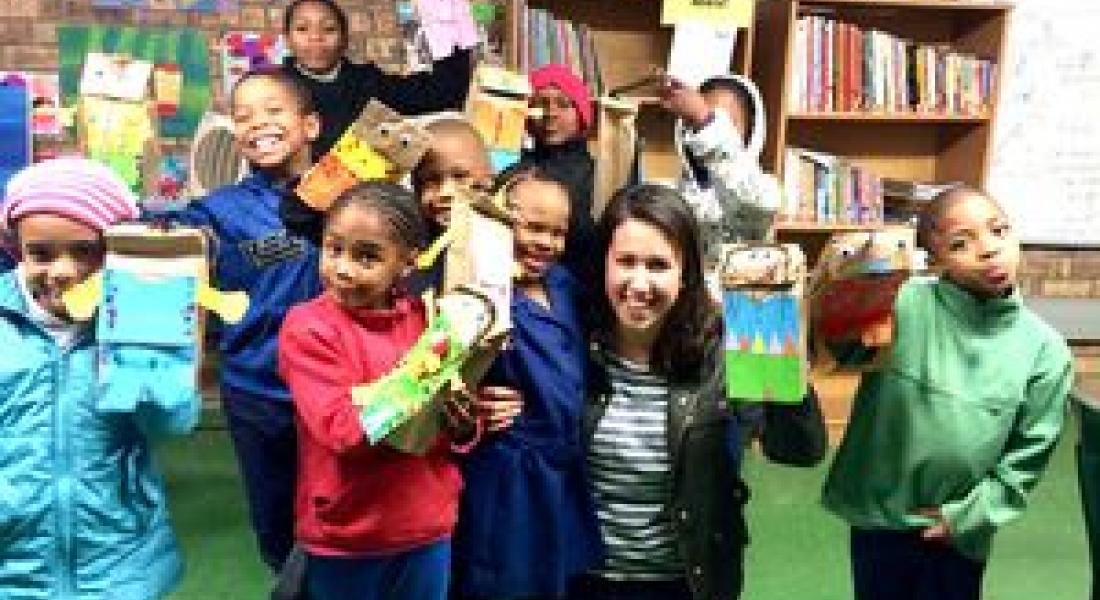 International Development Studies minor Meghan Gallagher ’16 spent two months in Stellenbosch, South Africa as a 2015 USAID Fellow. With the Reach Trust, an organization that provides mobile technology as educational resources, Meghan worked closely with an after school program, the Pebbles Project, and experienced the challenges and inequalities within the South African school system. She reflects on her experience below.

Planning craft projects that requires a first introduction of glitter glue and foil confetti stars to primary school students is a terrible idea. Within minutes of the new mysterious sparkly glue tubes hitting the table, it was in hair, on faces and smudged across newly cleaned tables and school uniforms. Today was my last day at the Delheim Wine Farm after school program, formally called The Pebbles Project. Each student made a paper bag puppet of themselves, or of an imaginary character, and was asked to stand up in front of the group and tell their “story.” It was a hilarious, and ultimately successful exercise blending creativity, public speaking and practicing English fluency; breaking up the usual routine of homework revision and tutoring and adding a little spunk to a challenging week at the center.

The term two examination scores had just been delivered and the results were hardly anything to celebrate. Despite these students having access to the additional resource of after school tutors, homework clubs, an extensive travelling library and computer access, scores (out of seven) remained locked at threes and fours, with an occasional two and an occasional five. The morale was low and you could feel the discouragement of staff and students alike. The program director sat with me for over an hour talking through her frustrations. “What more can be done? Aren’t they receiving the extra help they need here? They have more than the other students at school! Why isn’t the extra support showing improvement in their test scores? If this isn’t helping, what possibly more could be done?? Imagine the scores of the other students, who don’t have these resources!” She was heartbroken.

I realized just how hard it is to teach the value of education to first generation students. Lettie had lamented saying, “they just don’t get it, they just can’t see what they are working towards. They are one of fifty in their classes at school, how are they supposed to focus and power through if they can’t see how their life is going to be any different with a high school education.” As someone who was raised in a family, and community, where education was the first priority, and where the future goals were college, grad school and career driven motivations. It’s easy to forget that the same sentiment, especially when the feasibility of achieving a college or tertiary education, is low.

In January of 2015, the South African Department for Basic Education boasted a record year of students who passed their grade twelve matriculation examination in 2014. A 75.8 percent pass rate, they said. However "passing" the matric only requires 30 to 40 percent proficiency in three subjects areas. The 550,127 students who sat for examinations in 2014 represent only half of the students who entered first grade in 2004, with most dropping out before grade 10.

I spent my time in Stellenbosch to gain a nuanced understanding of the current state of South African education, but specifically how to use mobile technology to address educational inequality and improve educational outcomes. Recent language and curriculum changes, as well as the added challenge of school integration creates a multi faceted and complex set of problems unique to the post-apartheid generations of South Africa. There exists staggering inequality in the South African public school system, which is largely correlated to racial make up and what neighborhood they are located. With the end of apartheid segregation policies just 25 years prior, it was fascinating to look at differences between predominately white, colored and black schools and how those origins still today reflect to the availability of resources and equality of education in the classroom. Even within the university town of Stellenbosch, one of the highest achieving college prep schools was just kilometers from an all black, run down, failing school.

You certainly can’t replace a formational teacher, a one-on-one tutoring session, or an extensive classroom library. But can making comparable resources available through mobile devices begin to bridge this gap educational inequality? And more specifically, can incentivizing homework completion and active learning behavior begin to supplement that lack of motivational and emotional support in first generation learners in low resource schools?

It was in this light that The Reach Trust created Learn2Earn. As a behavioral economist, the office CEO is passionate about exploring the way these incentives can be created and made available through mobile devices, and whether they can change behavior and provide valuable teaching tools. He founded The Reach Trust, a public benefit organization that creates mobile applications to provide health and education resources. Operating on even the simplest devices, Reach Trust offers many different services from additional math problems to career counseling, from a weekly updated book library to HIV/AIDS help line.

The mobile application I was focused on was called Learn2Earn. Learn2Earn is an incentives program that rewards students for completing daily math quizzes. Through this regular, incentivized participation, the goal of Learn2Earn is to stimulate active learning behavior and create long-term habits that results in improved educational outcomes.  It is a fascinating initiative, and through an impact assessment of teacher and student surveys and tracking student performance, we will be able to begin to identify whether or not they are achieving these goals.

I drove back out to the Pebbles Project program to say goodbye the day before I went home, and again had a long conversation with the program director. She was more hopeful that day and left me with this lasting remark. She said, “You know Meg, sometimes it feels like everything is just too much, that we are too far behind. But each day we build on the next, and with each student, each generation, we are strengthening the future of this country. That’s something worth coming to work everyday for, and sure something to be proud of.” And I certainly agree. 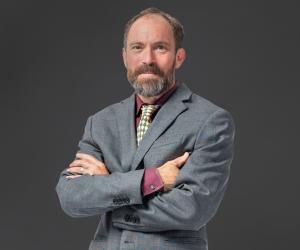 With NSF-Funded Research, Beatty Aims to Show How Engineers Rose in Prominence and Shaped the Modern World

Kellogg Faculty Fellow Ted Beatty received an NSF grant for his project “Blueprint for Modernity: A Global History of Engineering,” a collaborative effort with co-principal investigator Israel Garcia Solares, a postdoctoral fellow at the Kellogg Institute.