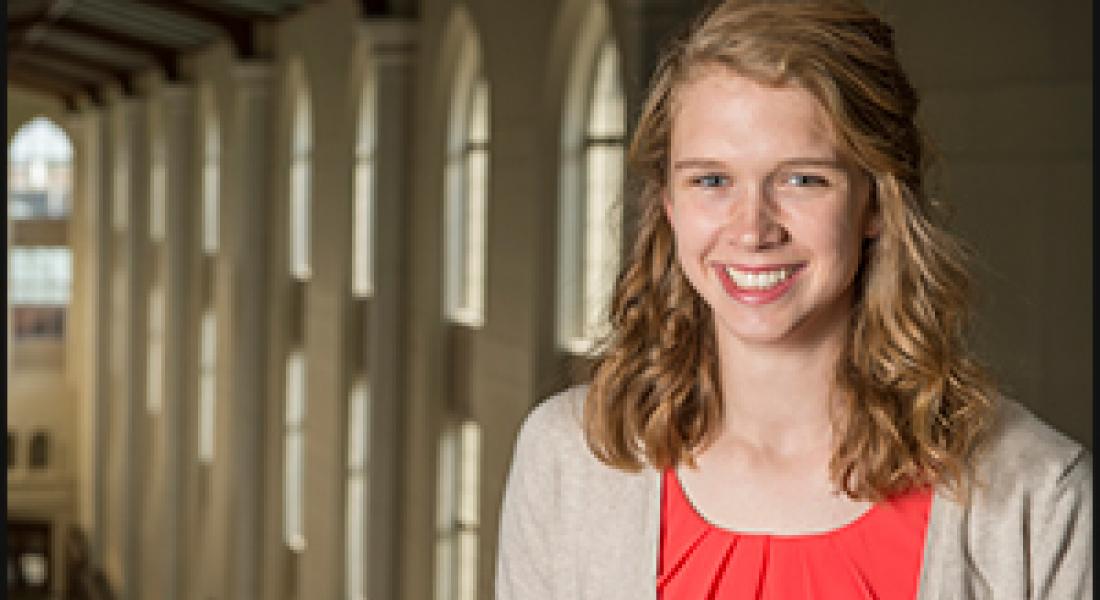 Anna Kottkamp, an environmental science major and International Development Studies (IDS) minor from Wenatchee, Washington, has been named valedictorian of the 2015 University of Notre Dame graduating class. She will present the valedictory address during the University Commencement Ceremony on May 17 (Sunday) at Notre Dame Stadium.

A member of the Glynn Family Honors Program and Phi Beta Kappa Honor Society, Kottkamp has achieved Dean’s List honors each semester and has earned a 4.00 cumulative grade point average.

During her Notre Dame career, Kottkamp was awarded an Undergraduate Research Opportunity Program grant and traveled to Bolivia in the summer of 2014 to conduct a case study on an organization that works with small-scale farmers in the highlands of Bolivia. She also earned an Experiencing the World Fellowship from the Kellogg Institute for International Studies for an internship during the summer of 2013 in Peru where she worked on various projects, including the design of an environmental education curriculum.

As an undergraduate research assistant for Jennifer Tank, Ludmilla F., Stephen J., and Robert T. Galla Professor of Biological Sciences, Kottkamp worked as part of a research team on a watershed scale study about the impact of cover crops on agricultural streams. Her original work has been accepted for presentation at the annual conference for the Society of Freshwater Sciences in June.

Kottkamp is also a member of the varsity women’s rowing team. She began her career as a walk-on student-athlete with no previous competitive rowing experience and went on to earn a full athletic scholarship. She was selected for the Rosenthal Leadership Academy within the athletics department and was named an NCAA Elite 89 award winner, Atlantic Coast Conference Scholar-Athlete of the Year, Collegiate Rowing Coaches Association National Scholar-Athlete and ACC postgraduate scholarship recipient.

While at Notre Dame, she also performed as a member of the University’s Voices of Faith gospel choir and volunteered with several South Bend nonprofit organizations including the Catholic Worker House and Monroe Park grocery store co-op, where she served as board member.

After graduation, she plans to pursue postgraduate service with the Jesuit Volunteer Corps Northwest in Hood River, Oregon, working at the Columbia Gorge Ecology Institute in educational programming for fifth-graders. She intends to later enroll in an environmental science graduate program.

Read more about Anna in The Journey to Valedictorian by her classmate Emily Mediate '15.