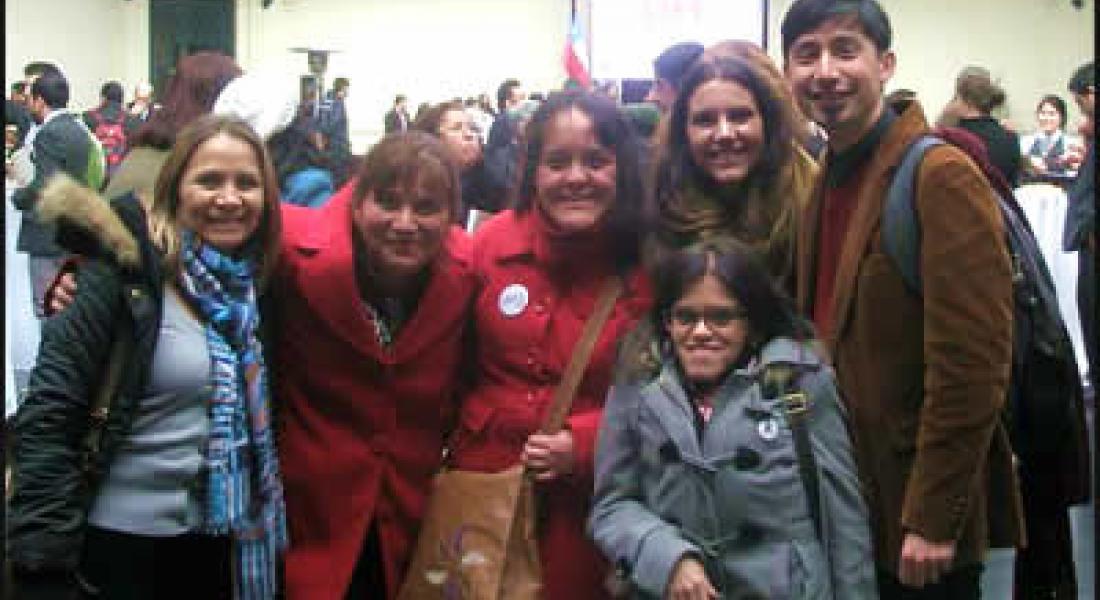 It is a powerful rallying cry—and the name for an upcoming research project and campaign in Santiago, Chile, on perceptions of people with disabilities, one for which International Scholar Alexis Palá ’15 recently won a Fulbright US Student Award. An anthropology major, she is one of seven students who have worked closely with Kellogg out of the ten Notre Dame seniors selected for the prestigious award.

Palá entered Notre Dame with a clear purpose: to gain a deeper understanding of disabilities, particularly intellectual disabilities, and then to work to end discrimination against people within this population. With the support of Kellogg Faculty Fellow Vania Smith-Oka, she dedicated herself to her goal: taking coursework, honing her research methodology skills, living in a L’Arche community, and working with children and adults with intellectual and developmental difficulties.

Most importantly for winning a Fulbright, she conducted extensive research in Santiago (twice funded by Kellogg) and Madrid (funded by the Nanovic Institute) for her senior thesis on the quality of opportunities provided to people with disabilities, how they perceive themselves, and how they are perceived within their communities.

The seed for Palá’s interest and crusade is personal; her older sister, Lauren, has Down syndrome.

“Eight years ago, I realized one day that I, myself, was setting barriers for Lauren,” Palá reveals. “There were some conflicts between us at the time, because I did not see her as a person with full potential but saw her first for her disability. When I began to actually see Lauren for the many abilities she has always possessed, I began to work with her rather than against her.”

Palá’s Fulbright project in Chile aims to replicate that same thought process in others.

In 2010, Chile signed and ratified the United Nations’ Convention on the Rights of Persons with Disabilities, which proclaims that “all people must be provided with the opportunity to live to their fullest potential, whatever that may be.” Yet, within a country in which an estimated one in eight persons has a disability, there are many contradictions. As is true around the world, Chileans with disabilities are still stigmatized, discriminated against, and marginalized.

Palá’s two summers in Santiago were critical both for her thesis research and, as it turns out, for laying the groundwork for the Yo existo campaign. During her second summer in particular, she networked with organizations within the disabilities movement and built an advisory board composed of leaders from those organizations.

With their help and insights, she tackled the problem of how to move beyond acknowledging the realities of stigmatization and into action.

“I was inspired to design and launch the Yo existo campaign,” Palá explains, “after hearing from a board member that a Chilean politician had remarked to him that the dogs that sleep in front of the Palacio de La Moneda are more visible in society than persons with disabilities.”

Palá’s Fulbright project has three parts: a baseline survey to better understand the context of discrimination in Chile and knowledge about human rights before the launch of the Yo existo campaign; the crafting of effective educational materials; and a large-scale campaign directed both at people with and without disabilities, followed by a month of calibrating the campaign’s impact and planning how to build on it.

It is a high-stakes project—one that Palá fully acknowledges came into existence through the contacts made through Kellogg.

“I honestly owe everything to Kellogg,” she says. “My thesis research in Chile and the guidance I received from Dr. Smith-Oka motivated me to apply for the Fulbright. I wanted to act upon the data that I had gathered and to give back to the organizations that have given so much to me.”

Palá anticipates that not only will her campaign nudge Chileans further into acceptance of people with disabilities, but personally, it will teach her critical skills on translating policy into action.

“My goal is to become a lawyer who is dedicated to protecting the human rights of marginalized populations,” she says. “I want to devote my life to promoting mutual respect and understanding of all types of diversity—disability, language, nationality, or background.”