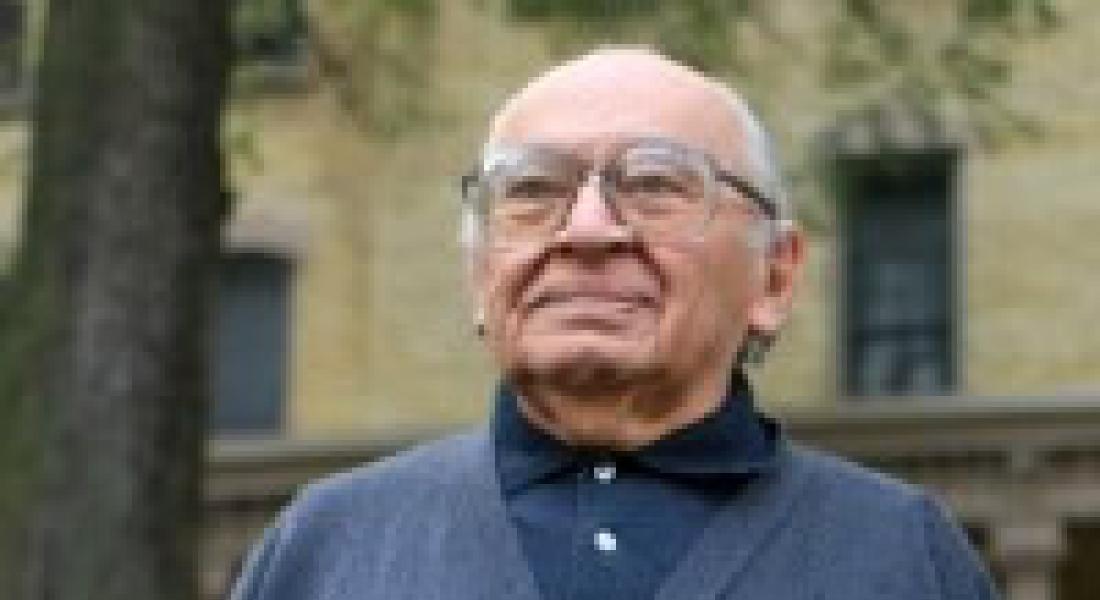 Kellogg Faculty Fellow Rev. Gustavo Gutiérrez, OP, John Cardinal O'Hara Professor of Theology at the University of Notre Dame and widely acknowledged founder of the "liberation theology" movement, was in Rome earlier this week, the surprise speaker at a Vatican book launch.

Father Gutiérrez was helping to launch a book, "Poor for the Poor: The Mission of the Church," edited by Cardinal Gerhard Mueller, who directs the Vatican's Congregation for the Doctrine of the Faith. Two of the book's chapters were written by Father Gutiérrez, and its introduction was written by Pope Francis.

Among the remarkable aspects of the occasion were the hearty applause received by Father Gutiérrez and its reflection of a decades-long change in the relationship between a once controversial theological movement (and its principal spokesman) and Vatican authority.

A member of the Notre Dame faculty for the last 13 years, the 85-year-old Father Gutiérrez is widely acclaimed as the "godfather" of liberation theology and is the author of the movement's foundational text, "A Theology of Liberation," published in 1971. The movement launched by his work grew rapidly in a Latin America plagued by the military dictatorships of the 1960s and 1970s and became one of the most influential in contemporary theology by calling attention to the Church's vocation to resist the oppression of the poor.

During the 1980s and '90s, Father Gutiérrez was among the theologians whose work was exhaustively and unsympathetically analyzed by the Congregation for the Doctrine of the Faith. Pope Benedict XVI — Cardinal Joseph Ratzinger in those days — was the prefect of the congregation and the principal investigator. In 1983, while Gutiérrez was serving as a diocesan priest in Lima, the congregation complained to Peru's Catholic bishops about Gutiérrez's writings, but the bishops declined to condemn them.

Later, in 1984 and 1986, the congregation issued official disapprovals of certain aspects of liberation theology. Among the congregation's misgivings were the "insufficiently critical" use it made of traditionally Marxist notions of history and social analysis, and the manner in which its emphasis on institutional evils seemed to obviate a serious consideration of individual sin. Ratzinger and his congregation saw to it that Gutiérrez spent much of the 1990s writing, rewriting, revising and clarifying theological arguments.

Father Gutiérrez's accounts of those experiences are always good-natured. "Oh yes," he told an interviewer recently, "during those days there were difficulties and misunderstandings — some of them my own, I must say — but this is how theology, all theology, works."

"I can't think of anyone whose witness has been more consistent, or influence more fundamental, among any living theologians," said John C. Cavadini, director of Notre Dame's Institute for Church Life, who chaired the theology department when Father Gutiérrez came to Notre Dame in 2001.

"I recruited him because he is the leading Catholic liberation theologian, indeed the founder of the field. Growing out of the 'resourcement' movement of the mid-20th century theology, Father Gustavo thought that the rich heritage of the Church belonged properly to the poor, and he began producing small, easily distributable catechetical anthologies of brief passages from the Fathers of the Church. Out of this a whole grassroots pastoral, catechetical and theological movement grew, with the poor and for the poor."

Many of Cavadini's theological colleagues in Rome, and evidently Pope Francis as well, share this high opinion.