Traditional and Alternative Medical Practices: Accessibility and Impact on Quality of Life for Female Urban Village and Slum Residents in Rishikesh, India 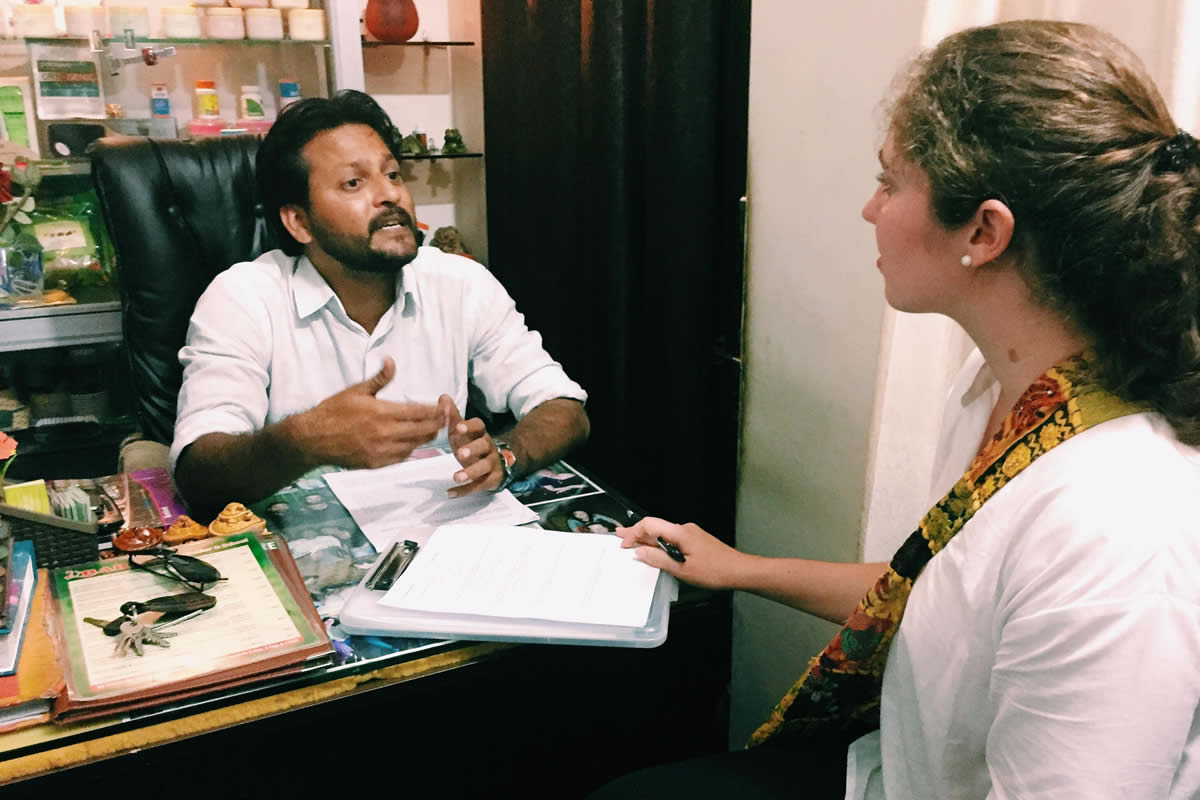 Traditional and Alternative Medical Practices: Accessibility and Impact on Quality of Life for Female Urban Village and Slum Residents in Rishikesh, India

This summer I had the opportunity to spend six weeks in Rishikesh, India as a recipient of a Kellogg/Kroc Undergraduate Research Grant. I was inspired to develop a research proposal and apply after speaking with a friend about her previous experience conducting research regarding the healthcare system in India. While I have enjoyed learning about health, disease and medicine through my science coursework, I developed a curiosity to learn more about the present-day impressions of traditional and alternative systems of medicine and how it distinguishes the healthcare system of India. Upon further investigation, my research theme narrowed to focus on the contribution of traditional and alternative medicine to the accessibility and availability of affordable, quality healthcare for community members in rural India, where there is greater risk for limitations to accessibility and resources. I decided to investigate six of the most renowned traditional medicine systems, referred to as AYUSH: Ayurveda, Yoga and Naturopathy, Unani, Siddha, and Homeopathy. My two interview groups were trained AYUSH practitioners in local hospitals or healthcare centers and female community members 18 years or older who have either lived in urban villages or slum communities in rural India. These individuals were most likely to have used or be familiar with different alternative treatments. I was also interested in learning from females with a lower socioeconomic status as they represent a particularly disadvantaged and oppressed population in a matriarchal society that has had past tendencies to discriminate against cast, which can significantly influence their health-seeking behavior.

In my interviews, I was able to ask general demographic questions to better understand their home life, beliefs, resources, and other life circumstances. I was also able to ask open-ended questions specific to the practitioners and female community members; I learned about the differences between each practice, their perceived accessibility, how and why it may be beneficial. I also asked community members whether the use of specific therapies helps to mitigate their stress that may or may not be related to the economic and social climate.

There were a number of challenges that I faced in organizing and conducting interviews. For one, it would not have been feasible for me to approach strangers on the street asking to interview them; it was imperative that I find a connection through a local contact person in order to bolster my credibility. Luckily I had a wonderful support group from the professors that I met from the All India Institute of Medical Sciences medical college. They helped to establish connections with the community members. As this was my first time conducting my own research project, I had to plan for and get comfortable with interviewing others so that I could come across as trustworthy and caring, but ultimately clear and concise in my communication so as to best facilitate candid conversation from any open-ended questions I would ask. I was able to continuously improve my ability to adapt follow-up questions and probe for respondents’ unfiltered and unbiased knowledge of the topics I wanted to learn about. One of the difficulties in having clear conversation was if there was ever a time in which I did not have access to an interpreter and the participant could not speak English. With the help of friends that I encountered from the medical college, I was able to construct a phonetically written Hindi script which allowed me to conduct the interview in Hindi and have the conversation translated through an audio recording. When I did have access to an interpreter, the questioning was fairly straightforward, but it was difficult to have a conversation beyond surface-level. The biggest concern was that the participants would grow impatient and would not be interested in completing an interview that lasted for much longer than 20 minutes. I was able to adapt and improve my questioning methods so that the demographic questions could be answered efficiently and there could be time for answering the deeper open-ended questions.

As to asking particularly sensitive questions regarding physical health of female community members and the potential for having experienced intimate partner violence, it was very circumstantial. It was often the case when we would visit someone’s home in the village for an interview that the husband wanted to be present and monitor the questioning, and even sometimes answer certain questions for his wife. When this would happen, it was not appropriate to ask such sensitive questions; even if we were to ask such questions, it would have been unlikely for the woman to share openly and honestly if she had experienced violence throughout her lifetime.

Another challenge that I faced was finding adequate transportation and coordinating a meeting place with practitioners to conduct interviews. The primary modes of transportation in Rishikesh are by motorcycle or by rickshaw, and I did not consider renting a motorcycle. Rickshaw drivers are fairly effective in their methods of coordinating routes and going from one end of town to the other end, however whether I was able to “hitch a ride” was dependent on how far they were going and how much they wanted to charge me. Initially, in recognition of my being a tourist, they would severely overcharge me compared to other local customers. I quickly became aware that a typical three kilometer ride from my hotel to the hospital was eight rupees, and I had to barter my way to a reasonable price or else wait for a rickshaw who would offer me the local rate. Aside from my regular route to the hospital, it was difficult to get from one place to the next in a timely manner as the traffic was often very heavy and there was always the likelihood that cows would be in the roads blocking traffic. I learned to anticipate delays whenever I planned to travel a farther distance. It was also sometimes necessary to ensure that the meeting place for a given interview was safe and secure, so as a precaution I would often visit the location of the practice either to identify a practitioner interviewee or otherwise confirm a meeting time during broad daylight.

The most difficult but certainly most worthwhile challenge was obtaining formalized support for and approval of my research from the All India Institute of Medical Sciences Institutional Ethics Committee. At the time of receiving confirmation that a professor from the medical college was willing and able to help me, I did not realize the implications of utilizing her support in accessing other professors and healthcare professionals and the need to obtain approval for my research project. Luckily throughout the six weeks that I conducted my research, I was able to submit my proposal and receive permission to receive support from them and publish my findings.

With regards to my primary research goals - to understand the components of TCAM systems, how they operate and can be accessed by the underserved individuals in Rishikesh, and their impact on quality of life for women in the area facing notable social and economic tension; to highlight the potential comprehensive benefits of traditional and alternative medicine as a means for improving healthcare opportunities and accessibility - I came to learn that there are many discrepancies of affordability, accessibility and perceived quality of medical care. I was surprised to learn that many AYUSH practitioners found that patients will come to see them as a last resort and instead will attempt allopathic (modern Western medicine) treatment first. This was not always the case, as some patients did not have the means to afford allopathic treatment; there were some in the community who strongly relied solely on alternative therapies as was part of family tradition; there were still others who, faced with a particular illness or pain, were aware of the benefits of alternative therapies and thus sought them. The common theme for both practitioners and community members was that a dominant reason to pursue alternative medicine was that allopathic medicine often presented with unpleasant side effects. A commonly held belief is that a large aspect of health is dependent on conscious lifestyle choices which are not to be satisfied or replaced by a pill. As for other investigations relating to personal health and wellbeing of community members, discussion or recognition of mental health disorders was scarce, but if there was, it was never treated but was understood to be a normal part of life. This was often the response also for perceived life stress and strain resulting from physical, psychological, emotional, and socioeconomic circumstances. With a more formal analysis of my data, I hope to present my findings at various undergraduate research conferences. In the case that I pursue a master’s degree in global health, I hope to use this as a starting point for continued research.

Overall, my learning experience reached far beyond my research project. I was able to immerse myself in the culture, learn from professionals and friends that I met along the way, and expand my worldview. One particular statement that came up in conversation and I even noticed written on buildings and inside rickshaw compartments throughout my time there was “Guest is God”. This meant that travelers and visitors of India were welcomed and treated with the utmost respect and kindness, which I found to be the case with everyone I encountered. By the end of my six weeks, I was able to hold brief conversations in Hindi, I could easily navigate from place to place, I enjoyed many different foods without catching “Delhi Belly”, and I ultimately decided that one day I must return. 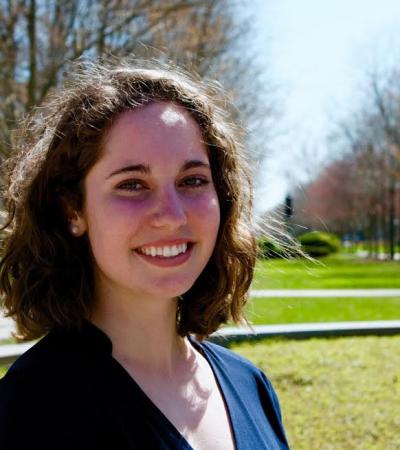