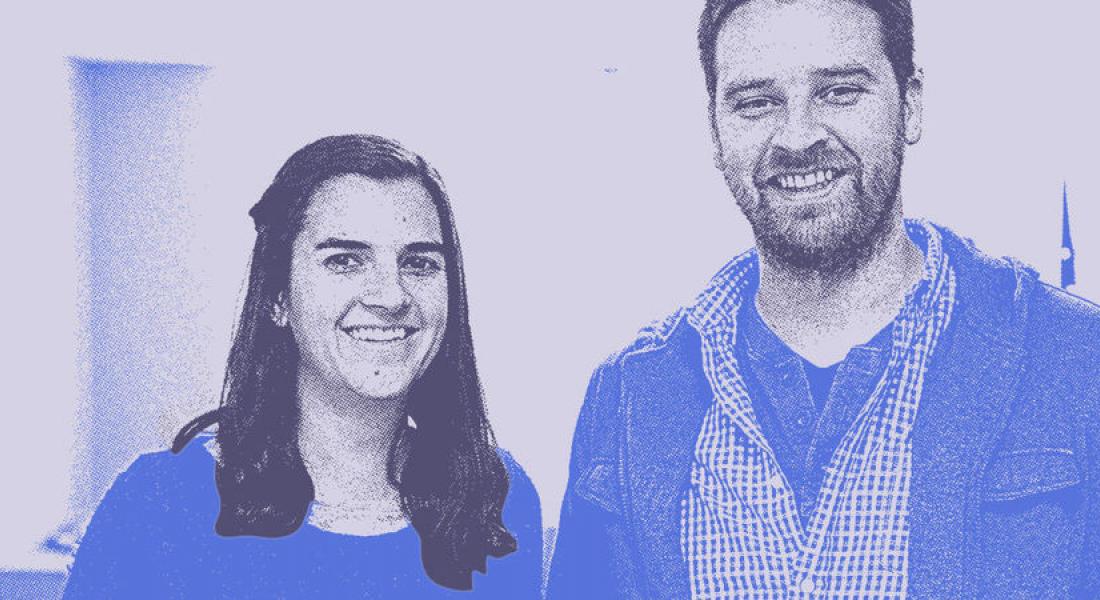 In fact, that’s key to what sets them apart. As co-founders and managing partners of INVANTI, a South Bend-based “start-up studio” that fosters businesses to address the most pressing problems facing everyday Americans, Gibbs and Mix are taking the traditional venture capital model and flipping it on its head.

Rather than accepting fully formed pitches from budding entrepreneurs, INVANTI starts by identifying the problems they want to build businesses to solve. Then, they search for and recruit people – often through LinkedIn – they feel would make a good potential entrepreneur. Only then do they get to work on ideation for technology-enabled companies to combat their identified issue.

“We're finding that a lot of the people that are a good fit for our program have started things in the past. Sometimes they've started companies, but more often they've started an activist group or a club,” Gibbs said. “We just care that you saw something that was a problem and couldn't help yourself but to start something new.”

Their idea for INVANTI came about while surveying the tech landscape and observing a disconnect between innovation and the communities it can most help. For so long, the San Francisco Bay Area and Silicon Valley have claimed the title of Entrepreneurship Capital of America. But while the technology boom has in many ways improved quality of life, Gibbs and Mix could see it wasn’t always trickling down to people in average American cities.

Despite their time studying at Notre Dame, South Bend wasn’t necessarily the obvious choice to plant INVANTI. But the more they thought about it, the more they came to view it as a strategic advantage. For one, its size was large enough to serve as a representative US city, but small enough to create networks of trust. The timing also worked in their favor. When they launched in March 2017, it was during a time of increased investment in economic development fostered by the administration of former South Bend Mayor Pete Buttigieg.

Since opening their doors, they have hosted two cohorts – while currently preparing for a third – consisting of five and seven potential business founders. During each six-month round, members of the class receive a living stipend and funding to help them do things like research the problem, make connections in the community, ideate and, eventually, incorporate a company.

Their first cohort, which began in September 2017, looked at problems related to financial health. One of the companies to come out of that incubation was Hurry Home, a real estate financing venture that looks to eliminate the need for traditional mortgages for homes worth $80,000 or less. What cofounders John Gibbons and Jada McLean learned upon arrival in South Bend was the difficulty for buyers in securing those mortgages because banks often can’t make a profit on loans that small, despite the fact that approximately 20 percent of homes in the US fall into this category.

“The banks really struggled making these mortgages because they’re regulated federally on the amount they can charge in origination fees to their clients and that is calculated as a percentage of the loan. So if the loan amount gets too small, the amount of money they can charge doesn’t cover all their costs; they can’t make money,” Mix said. “It’s an incentive problem.”

Hurry Home provides an alternative financing mechanism wherein the company raises the funds to purchase the homes and works with buyers to make monthly down payments. Hurry Home even reports that information to help buyers build their credit scores. The business has since garnered numerous awards – including from Notre Dame’s IDEA Center – and is backed by investments from Hustle Fund, Techstars, and the Housing Lab at the Terner Center at UC Berkeley, among others.

Importantly, It’s an idea that couldn’t have originated in San Francisco, which faces very different kinds of housing problems. In South Bend, the solutions to issues facing the community provide an opportunity to scale up and help people in similar places across the country.

Neither Gibbs nor Mix set out on an entrepreneurial path. Both come from civil engineering backgrounds and were “categorically not interested at all” in business before conceiving of INVANTIi, as Gibbs put it. She earned her bachelor’s from Duke in 2012 before seeking her doctorate at Notre Dame, which she completed in 2017. Mix is a triple Domer, earning his bachelor’s in 2010 and a pair of master’s in civil engineering and in engineering, science and technology entrepreneurship, both in 2013.

The start-up bug bit as they each spent time in international development during their undergraduate and graduate studies. Gibbs served as an advisor and board member at the non-profit Bridges to Prosperity, which builds footbridges to connect people in developing countries to resources like heath care, markets and schools.

“One of the things that I started seeing … is you have a lot of really talented people and resources being ported to solutions that don't actually make a lot of sense if you understand the problem,” Gibbs said. “At the same time, spending time in rural communities in places like Nicaragua, and El Salvador, (you see) there's clearly deep understanding of the problems within those communities, but it's just not getting connected with whoever the people creating solutions are right now.”

In response to the 2010 Haiti earthquake, Mix, along with Notre Dame engineering faculty and Kellogg Faculty Fellows Tracy Kijewski-Correa and Alexandros Taflanidis, cofounded Engineering2Empower, which focuses on multidisciplinary, sustainable and innovative approaches to permanent housing solutions on the island. He continued his work on the project as a consultant and program manager at Notre Dame’s ESTEEM program, but his focus shifted from pure engineering solutions to entrepreneurship. With that change in perspective, he began to think less about how those houses were built and more about how to address the underlying issues that limit access to that housing in the first place.

When first discussing the goals of their company, Gibbs and Mix began with ideas for solving international problems. After all, international development had made up the bulk of their professional experience. But as they started taking a closer look at the United States, they were struck by an entrepreneurial system where those with the resources sat back and waited for entrepreneurs to come looking for them.

“It seems to be clear to me that the only way to (ensure solutions are driven by the underlying issues) is to spend time with the people in the places where these problems actually exist,” Mix said. “And if you do that, you might actually notice really creative and interesting things.”

That has certainly been the case in their experience in South Bend. Now, the city is built into the very fabric of INVANTI, right down to the name. In their research, they came across the history of the Studebaker Avanti, which was the last car to come off the line before the factory shuttered in 1963. They loved the dual meaning – both the South Bend connection and its Italian translation: “forward” or “onward” – but quickly learned that Avanti was widely used as a business moniker. Rather than drop the name, they put their own spin on it and Invanti became a portmanteau, blending Avanti with their goals of invention, innovation, and investment.

“I think it reflects a little bit of us and what we do,” Mix said, “but also tries to pay some tribute to this long history of innovation that South Bend has that I think is really important for us to understand."

This article originally was published by the Notre Dame Alumni Association at weareND.com.